Grouped Object disappearing just when I need them

Grouped reference objects disappear just when I need them. Note that I have View/Component Element/SHOW Rest of Model.

When building geometry (floor plans) I will import a PNG reference floorplan explode it and then group and close it. I then start to define walls etc outside of the “floorplan” group so they don’t trash the plan or interact with other geometry. BUT the moment I start to group the new “wall” geometry the floorplan group disappears. Even if use XRay viz mode.

So it seems that if I continue to group as I build (as so appears to be so critical in SU) then very quickly the reference image or geometry will disappear from view. This is incredibly frustrating and the only way to avoid it is not to group/isolate the elements I am working on ( which ALWAYS spells disaster in SU). Having the other grouped objects disappear seems to be fundamental problem which I cant get around.

Comments, settings or suggestions would be appreciated.

I do the same procedure. Reason Being. I import an AUTOCAD FLOOR PLAN and it has 30 to 50 layers.
If I use it as is my Tags folder is populated with those autocad layers transformed to Tags. It is a mess I don’t need.

Instead I open a temporary Sketchup file, import the floor plan, explode, make it all a group “floor plan”, click “edit/copy”. Then I go to my working Sketchup file “edit/paste” and then tag the group as Floor Plan.

That gives me the background I need to work with and no mess in my Tags Folder.
I have not experienced the problem Peter has.

I do the same procedure. Reason Being. I import an AUTOCAD FLOOR PLAN and it has 30 to 50 layers.

Delete the tags and when asked reassign the geometry to Untagged.

That would and does work too. I prefer to clean it up before I bring it in.
My workflow, personal preference.

Thanks for the comment though. May be useful for others.

Yes, this can be very annoying. There should be the option to toggle the texture display behavior.

But that’s not what you described in your earlier post.

I just tested my description by running a .dwg import through the procedure I described.

My description works; so does your suggestion to import, delete the Autocad tags and reassign to “Untagged”.

I don’t see much difference in effort or results.

I’m sure we are just talking at angry dolphins or cross porpoises, auto correct again, Cross Purposes.
Whatever works for you is good.

I guess there is something I am failing to understand. What are you referring to in my post? Is there some sort of code? Angry dolphins and porpoises?

Tie your kangaroo down sport!
And a stick is what you call a boomerang that won’t come back.

What is going on here? lot’s of strange remarks, kangaroos and pedophiles? What do these remarks have to do with importing a file.

Are there any rules or code of conduct on this forum? I cannot find anything.

If rules exist; could someone in charge send me a message?

What is going on here?

I am not a native English speaker, but the phrases used are of the kind that the auto correct feature in my phone sometimes produces. Sometimes they are hilarious. The really weird ones were in old Word but thankfully in Finnish. I don’t always spot them before clicking Send.

What is going on here?

I am not a native English speaker, but the phrases used are of the kind that the auto correct feature in my phone sometimes produces. Sometimes they are hilarious. The really weird ones were in old Word but thankfully in Finnish. I don’t always spot them before clicking Send.

Auto Correct? comments by members who should know better and obviously would know how to use the editor in the comments section, They did manage to delete their posts which if they were not offensive, but hilarious, why were they removed.

Now Anssi comes forward under cover of not being a native english language person and states he thinks the comments may have been misunderstood and/or hilarious.

Kind of a sad testimony of members who appear to be held in high regard on this forum.

I am OK with just ending this at this point. I needed to express my feelings. I intend to move on and continue participation in this group.

The angry dolphins and cross porpoises is a play on “cross purposes”.

Haven’t worked out the kangaroos yet.

The reference to pedophiles refers to Rolf Harris (he sang Tie Me Kangaroo Down Sport).

I don’t believe there is anything untoward happening…

It was not belittling you but a bit of banter which was my reply to Box and not you. On reflection, I should have PM’d him, something I considered doing to you also but thought that since it has gone so public I’d post this apology publically.
I retracted my comments to Box who is Australian and I am Scottish as it seemed to offend you.
Occasionally a little bit of light-hearted humour creeps in on the forum but please accept my apology for upsetting you. Rest assured there was no ulterior motive or malice intended, just a little bit of frivolity.

So first of all thanks so much to those who have responded. This is such a great resource and I hope with time I can reciprocate.

Good question DaveR but I have a strong habit to group EVERYTHING as thing go very badly in SU when anything is left raw… We all know lines grabbing every which way. I also have grouped different plan levels images so I can scale them properly once the overall model is scaled.

What may be a foundation problem with my workflow is that I was using the Outliner window and grouping things (so they appear and can be togged on/off). This has a similar function to Tags which you have advised, BUT this requires texture grouping and hence disappearing. So I am now trying to work with Tags to declutter the field.

rkleins thank you for your suggestion regarding "pre-processing the CAD image. A lot of sense there and perhaps there may be benefit to scaling the textures there to avoid the 3 texture BUG I have run into a couple of times now.

DaveR you say that “a face with a texture” wont be displayed. That seems to be a key. Your dynamic image example perfectly displays the issue. Is there ANYWAY the settings to prevent this from happening. Grouping the texture prevents unintended interaction, but the image invariably disappears just when I need it…

As per Dave’s advice I have run some test files where I left them as textures (or returned to textures after localized scaling as a group) and I do do with mortal fear. Seems to be working but still fear the wrong things being grabbed or distorted. In a recent test I loaded in 3 floor plans (fl 1>3). The first 2 behaved but the 3rd texture disappeared when I exploded and grouped to scale… WTF? After fighting a bit I restarted SU and it worked as expected so this seems to be a intermittent BUG?

numerobis - Yes this seems to be a pretty fundamental interface issue with SU and so far does not appear to be due to an improper workflow. Seems we are trying to find a workaround to a pretty sensible intuitive workflow. Can we push this up to the SU development/interface group or am I dreaming in techo-colour.

Thanks again all and hope I can get on top of this.

If you just leave an image as an image after importing it there is no geometry at all to merge with other geometry.

DaveR you say that “a face with a texture” wont be displayed. That seems to be a key. Your dynamic image example perfectly displays the issue. Is there ANYWAY the settings to prevent this from happening. Grouping the texture prevents unintended interaction, but the image invariably disappears just when I need it…

First, there will be no unintended interaction between an imported image and anything else in the model. Leave the image as an image, save the explode and group steps for something else. If you want to be ble to show or not show the imported image, give it a tag.

Your current workflow is just more difficult than it needs to be.

Here’s another example from an in process model.

Note that the circle extruded to a cylinder does not interact with the image.

Are there any rules or code of conduct on this forum? I cannot find anything.

They can be found here.
https://forums.sketchup.com/faq

Very cool Dave… Thanks! Will give it a test drive and I suspect I have been making it a whole lot more difficult. Just have get the image scaling sorted out.

You can use the Tape tool to set an image to a known size.
Simply measure a known length on the image (click an both ends) and type in what that length should be and hit enter, then hit enter again when it asks if you want to resize it.

So I dragged an image into a new file. I did not change other than moving it down a bit. I then created a rectangle and grouped to serve as the walls. Shifted to parallel perspective. Opened the wall group and started to draw walls. Seemed to work for much BUT there are two WICKED grabs were the geometry stuck to the image. My old nemesis … I know it can’t be this hard to simply reference something. 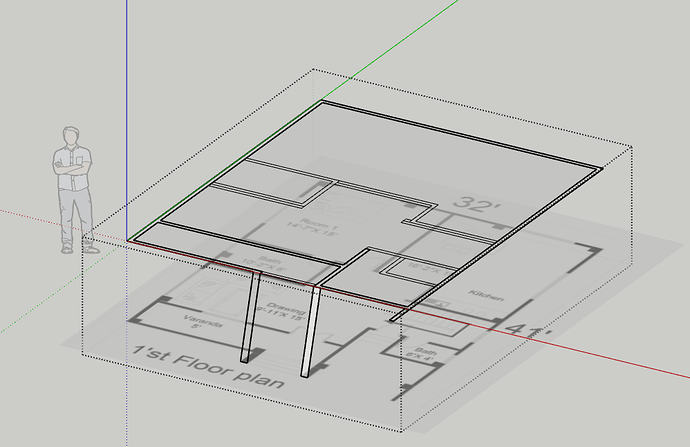