Hi folks, I now have sketch up pro layout and I mainly work on furniture projects and will be doing floor plans as well.

I have done many furniture renderings in sketchup but now want to export to layout in order to dimension them and create a better presentation.

In all my renderings I pretty much only save pieces as components and never done any layers.

I have gone online to try to watch instructional videos on how to use layout to do this. There are so many and a little difficult to find the ones that pertain to what I need.

Can anyone point me in the right direction on where to start to learn this?

I thought I would ask here to save some time hunting all over the internet!

Thanks so much! You guys have always been such a great help!

Components are ideal for project organization. and to a much lesser degree so are layers.

What I don’t see mentioned however—which is very valuable in exporting to Layout—is the practice of setting up **‘Scenes’ within SU, before going into Layout.

I’m among many people, I think, who view having scenes in place as a prerequisite to efficiently transferring your model into Layout.

You need to make use of layers and scenes in SketchUp, first. Layers to control which parts of the furniture are visible in each scene. Scenes are the views you want to show in your LO pages. The scenes are used as viewports in LayOut.

One caution: Do not do anything to the viewports in LayOut that result in them showing the scenes as modified. This includes double clicking on the viewports to make camera adjustments. Changing the viewport size by dragging the edges results in zooming. Panning can be done by moving the edges of the viewport. Orbit needs to be done in the scene in SketchUp. Update the scene, save, and update the reference in LayOut.

Start working with LayOut and see how you get on.

@DaveR Dave, I’ve read many of your answers where you give this or very much the same advice, and I agree whole-heartedly. I have two questions–or rather 've come up against two situations where things you mention in this post are problematic.

Which brings up my second issue:

Of what good use is double clicking in a layout viewport?

I think if you were going to make a “down and dirty” quick thing to show a client or something, maybe it’s alright to orbit in the viewport. Generally it’s more likely to cause problems. Over the years I’ve seen more problems as a result of users modifying the viewports away from the SU scenes.

(Is there a way to turn this obnoxious feature off?)

The primary thing is training. Train yourself to keep the viewports from becoming modified. You can and should put the viewports on a layer or layers that can be locked when working on text or other entities positioned over the viewports. This will help you avoid accidentally double clicking on a viewport when you mean to double click on something else. In LO2018 there’s also an option to lock viewports in the Context menu.

I don’t know of a scene manager sort of thing but you could put the Scenes window in its own tray by itself. Then set it to display the scenes with large thumbnails.

One thing you might consider is that you may not need as many scenes as you are making.For example, you might have a scene for the front elevation of the building and a second elevation of just the front entry area with the idea that you’ll use the second as a detail view in LO. Maybe you could just get by with the overall front elevation scene and crop it down for the detail view. I frequently use the same scene for more than one viewport in that way.

Happy New Year to you as well.

The problem I have with trays is that they can’t be minimized … only turned off. The contents can be minimized, but the tray itself remains, using up screen real-estate. Back in version 2015, for example, I would put the organizer in a corner of the screen and could open or close it with a single click. When unneeded, all that remained on the screen was its title bar. THAT to my way of working and thinking was perfect. But that tray thing just uses up screen space. Not such a terrible thing on my 30" monitor, but horrible on my laptop.

And for anyone in the development team reading this: why does the scroll wheel on my mouse move around in the tray and the tray’s contents in SketchUp but has absolutely no effect in LayOut? Oversight?

The contents can be minimized, but the tray itself remains, using up screen real-estate.

Click on the push pin at the top right corner of the tray. It’ll minimize.

Personally I like the tray feature. It mimics the way I had been setting up SketchUp since the utility windows were introduced. With the added benefit of extra toolbar space at the top. I’ve never missed having the little bit of drawing window space occupied by the tray. Here’s my setup for SketchUp 2015. 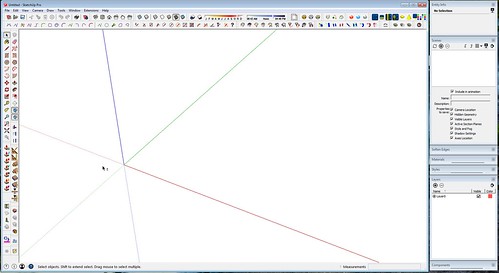 The pushpin turns the docked tray into a tab. Click on the push pins in all trays and they all turn into tabs. OK. But your image shows your tray OUTSIDE the active window, and when you do that (or as I like to do, have the outliner (say) NOT docked, but in a spot I found convenient at the time and would be happy to continue with, the push pin goes away. Then when minimizing the item in the tray, the shape and size of the tray remains. Which, I guess is why it’s called a tray, because when my guests and I take our martinis off the tray, the tray doesn’t shrink to pocket size.

Ah, well. One day these things will all be fixed to satisfy the whims and workflow methods of all 17 million (plus or minus) SketchUp users and THEN what will we have to gripe about? Politics?

P.S. I guess I could make a whole bunch of trays that hold just one item… and um…what was I saying about the plethora of scene names?

But your image shows your tray OUTSIDE the active window,

As I wrote, that’s a screen shot of SketchUp 2015 before trays.

Enjoy! I’m going to go look out the window and see if it’s clear but I’m not going out. Negative 17°F here with a wind chill of -36°F.

Hi Dave, thank you!! I ordered a layout instructional book from Mastersketchup.com as it looked pretty good! It is the book that JimD posted in this topic.

I am just waiting for it to show up!

I have attached a screen shot of a side piece of a shelter bed we are building. The builders want it so they can just print to scale and use this a template.

I have it in SU layout now and not sure what to do next as I have to be able to email this file to them so they print it to scale and then just trace it out.

Do you think you can give me a quick play by play how to proceed? 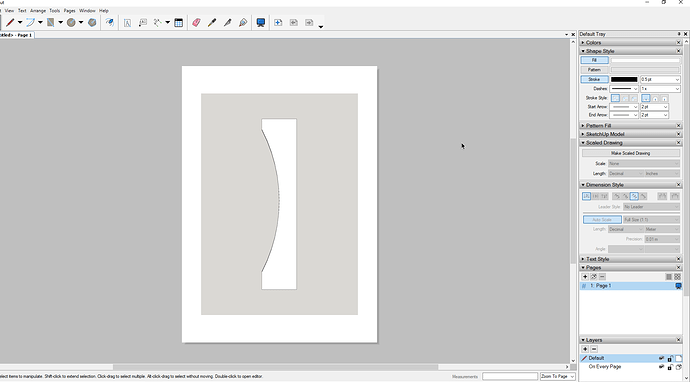 Select the viewport and go to the SketchUp Model window on the right side in the tray. Set the scale to 1:1 and adjust the borders as needed. I would change the style in SketchUp for the scene so that there’s no background. Then I would render it as vector in LayOut before exporting as a PDF.

If you send me the LO file, I’ll set it up for you so you can see all these things. 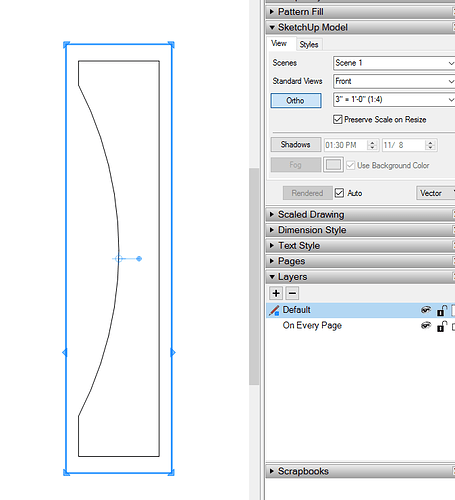 Thank you soooooooooo much!!!

Hi Dave, i am working on the early stages of a trestle base and for the life of me I cannot figure out how to use my follow me tool in order to extrude the top portion of the trestle?

I have attached a picture of what I am trying to accomplish. I hope this makes sense?

I think it is probably something really easy?

I have been trying to watch videos on how to do this but have not found one useful yet!! 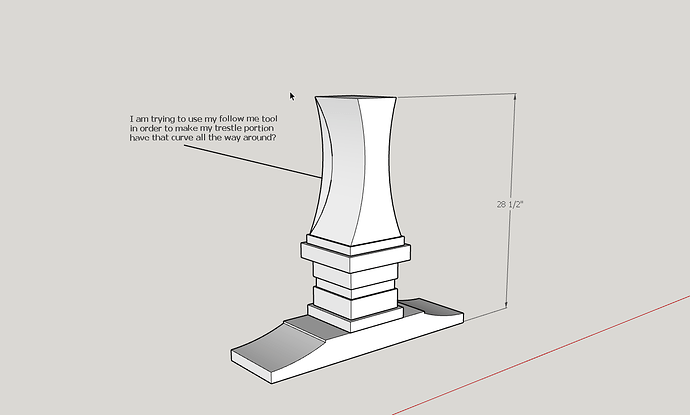 Can you upload the SKP file?

Thanks Dave! Here ya go. I know I am just doing something wrong with the follow me tool? I can use it for round items but when it comes to squares and or the shape of the top piece of this trestle i am a little confused?

Is this what you’re trying to do?

i redrew the column and placed the curve on the side. Then I selected the outside perimeter of the column, got the Follow Me tool and clicked on the waste.
For Dave.skp (89.8 KB)