A pop up alert I have just received suggests there is a new version of SU and directed me to the download page. It looks like it’s still SU 2016 which I already have installed. Surely SU 2017 will be out soon so is it necessary to download another version of the old software?

I don’t see any message about a new version of SketchUp but there was a maintenance release early in the year. Is it possible you din’t get that release before?

I assume you’ve closed the message box. What happens if you click on Check for Updates in the Help menu?

Edit: 16.1.1451 is listed as the most recent revision on Mac. Is it possible that pop up was for some extension? I don’t believe I would install that “update”.

There’s supposed to be a very recent release for Mac to fix some crashes for SU 2016 on new Sierra OS release. See this forum SU and Sierra topic(s)

Ah… Thanks John. I hadn’t seen that and the article hasn’t been updated.

I had no problems downloading the September 19th update. Its short version number is still 16.1, but the full number has changed to 16.1.2418. It is just for fixing crashing issues in macOS 10.12.

So it sounds as if there is an update that we ought to be downloading. Is that right? There doesn’t seem to be a clear answer. For reference, the attached is what I see when I start up SU in the morning. 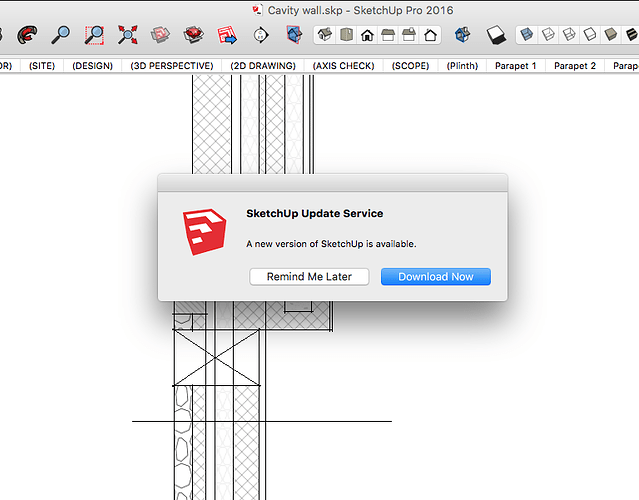 Have just tried downloading latest version but download got stuck half way through. There is a notification that starts to say that I do not have permission to acc… and then I can’t read the rest and can’t find out how to do so.

Anyone else with this problem?

As you can infer from the title of the topic sketch3d_de linked, the maintenance release was purely to address some issues with SU 2016 under macOS Sierra. There were no new features or other bug fixes, so unless/until you upgrade to Sierra there is no need to get the SU update. That said, I downloaded and installed it without problem, though there were some early reports of others having issues.

Oh right. I’m not on Sierra yet and may wait until SU 2017 is released.

I’m a bit surprised that when you get notified of an update it doesn’t tell you that it only refers to a specific operating system. Must be quite a lot of people wasting time successfully or unsuccessfully downloading software they don’t need!

the version check does simply compare the build numbers and alerts the user if a more recent version is detected. It does not evaluate the system requirements or constraints the update requires or is needed for… which is the common industry standard for an update checker.

what is more annoying is imho:

refering the user to a new main version may lead in connection with a SU Pro version to a program installation which doesn’t run with the existing (old) license data. therefore either let the automatic check for software updates check for versions of the same branch only or better do explicitly describe whether a mainteance release (= update) or a new major version (= upgrade) is available. Best would surely be a configuration option for this in the “Window > Preferences > General > Software U…

the version check does simply compare the build numbers and alerts the user if a more recent version is detected. It does not evaluate the system requirements or constraints the update requires or is needed for… which is the common industry standard for an update checker.

No malice intended, however, saying it’s a common industry standard is such a generic copout. Being an ex-programmer I can assure anyone, other than slack arsed programmers, that there is bugger all effort required to create a workaround to incorporate a simple informative message. I think we should all stop being sheep and stand united to get programmers/software vedelopers/distributors to create some modicum of user friendliness rather than just rake in the monetary rewards and feed us urine-ant “canned” excuses/replies.

… anyhow, posting a piece of information concerning the new release and a link to the release notes to the alert dialog shouldn’t be a big thing.

besides of this, installing the new version typically does not harm the current installation.