I tried to set some keys shortcuts to work with "Flip along Red (or Green or Blue) Direction, but when I did that I discovered that are 3 (THREE) kinds to flip objects: “exploded objects”, “groups” and “components”, so now I have 9 (nine) key shortcuts to do it according with the kind of the Entity.

There is a way to set just 3 key shortchuts to do it for all kind of entitys?

You sure you need a shortcut? Legal Flip along options are on the right-click context menu for applicable objects, so you don’t even have to take your hand off the mouse.

There isn’t a way to do it with just three keys without using modifiers. Although Gully has a good point about using the Context menu items, I like keyboard shortcuts for the Flip commands.I use F2, F3, and F4 for flipping components and Shift-F2, Shift-F3, and Shift-F4 when I want to flip multiple entities. (It’s the same Flip along commands for flipping loose geometry and multiple components. I don’t have any use groups so I haven’t setup shortcuts for them but if I were going to do that, I would use Ctrl-F2 and so on.

Since these keys are on the opposite end of the keyboard and I can hit them with just my left hand, I don’t need to remove my hand from the mouse to use them.

If your right handed

I’m left handed but use the mouse with my right hand.

I guess the best way to do my workflow faster is to use the key shortcuts or combination of them.
If what matter is the agility, it should exist just one option to flip each direction for the objects (groups, components or alone entities), because no matter what the object is, but what the tool is able to do.

How do you set up these Keyboard shortcuts for Flip commands?

I would love to use Shift+F2 to flip along green/red…this would save me a lot of time!

Actually i found Eneroth Individual Flip in the extension warehouse and this adds the shortcuts to the shortcut menu, so that solved it.

Another little gem from @eneroth3

So does that mean you don’t care about how to set keyboard shortcuts for Flip Along?

I don’ need it now myself since the extension works, but I would still like to know how to do it (I guess it would extend to some other uses as well?)
I left my post intact so maybe if you reply with the solution it it can help others too

There’s nothing especially difficult about it. As with setting keyboard shortcuts for other Context menu items, you need to have an entity selected that would make the item show in the menu. There are three sets of three Flip Along commands so separate shortcut keys for each.

FWIW, Individual Flip doesn’t do the same thing as the native Flip Along so you may still need to use the native ones anyway.

I’m trying to create shortcut keys for the flip tool but I can’t find the ‘flip’ tool in the function list it doesn’t seem to exist. Can anyone advise?
I tried searching for it with the fikter box, but as can be seen from this screenshot, nothing is showing for ‘flip’.
( 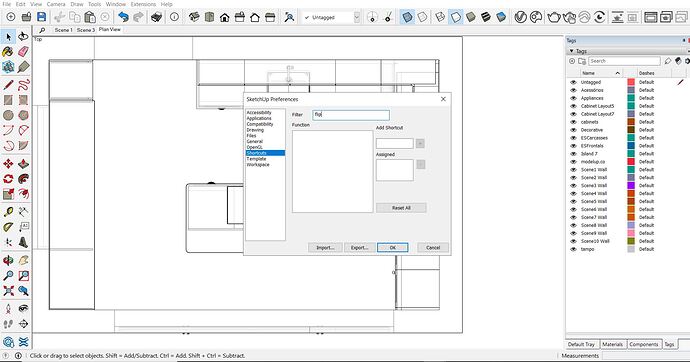 Things in the context menu need to be selected to show in the shortcut menu.
If you simply select a group, then look in the shortcuts, flip will be available.

FWIW, the post immediately before yours answers your question, too.

Thanks for that, I should have read all the posts on the topic before posting mine, I read the first few from the top but gave up after that…
Anyway, should be problem solved now…
Thanks