I’m trying to design a 3D printed case for a Google Pixel 4A , and I’m having trouble with the Intersect Faces feature.

I’m creating a model of the phone, and I’m going to essentially reverse that, make it a little bigger, and use that to make a case.

My problem is with making a mockup of the speaker/charging port on the bottom. It’s a bit hard to explain, but hopefully you’ll see from the attached video.

I included the SKP in a reply, since my computer isn’t very fast and I’m not sure how it would handle both in one post. Just to be on the safe side.

Is this what you’re trying to accomplish? 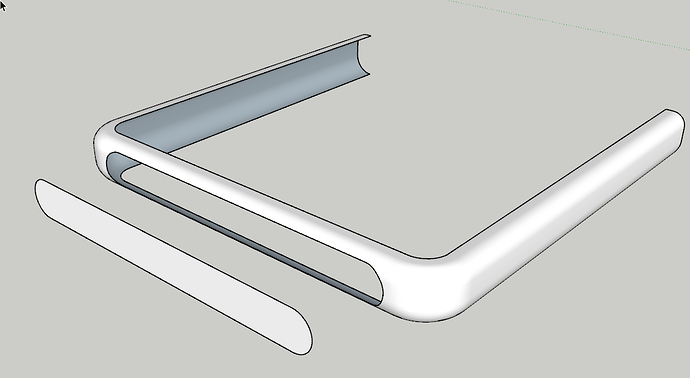 Looks like you’re running into the tiny faces issue. Use The Dave Method.

Dave gets there first.

I’d just add that in addition to scaling the model up, you should add some thickness to the walls of the case first. Use FollowMe, and again, work on a scaled up model.

But before doing that, I’d suggest redrawing the case profile.

You’ve used an unusual number of edges in your quarter-circle rounds - 10. Try 8 or 12 - it’s usually better to have a segment count which is a multiple of 4, though it isn’t essential.

And the top view profile of the case has different sized bottom left and right inner corners, neither of which is an arc any more.

The case side profile isn’t symmetrical vertically - should it be?

image364×708 3.33 KB
Something like this, perhaps, for the end result, before using Intersect Faces to cut the openings? 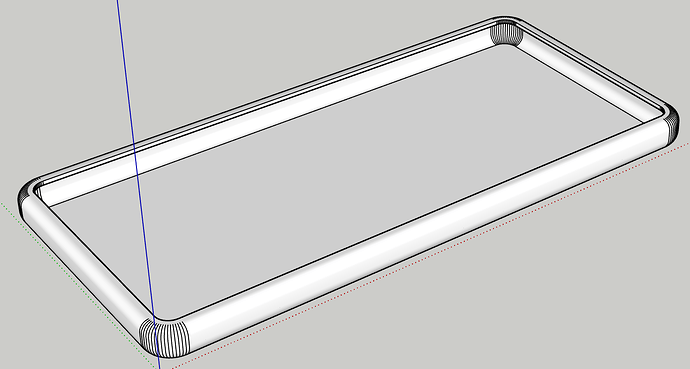 Dave,
Ahh. Yeah, I used the Dave Method for creating the mockup of the phone, but I didn’t think of using it for adding the speaker.

And no, that’s not exactly what I was trying to do, but I’ll try scaling it up and see if that works. Thanks!

John,
The thing I’m actually trying to make right now is a model of the phone itself, so I can get some dimensions for making the case. My plan was to make a model of the phone, then basically reverse it and add some thickness to the walls to make a case for it. I may also scale it up a bit so it’s not too tight of a fit.

I used an unusual number of sides because I didn’t use the Arc tool to make them; instead, I used the Circle tool. My main reason is that the Arc tool was causing some problems, even when I scaled it up (the Dave Method).

And yes, the side profile top and bottom curves are different, that’s an unfortunate design peculiarity by Google in their Pixel 4A. Apple makes their iPhones nice and symmetrical, but alas, Google does not.

Thanks for the help, guys!
~Jason

[Edit]
Actually John, that case you made helped a lot! Thanks!