Hello
In Sketchup I get 4 or 5 crashes in an hour of work, especially when I insert even simple components. 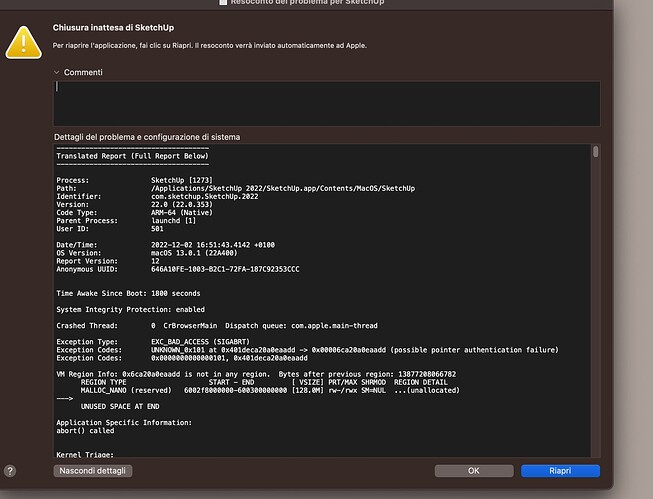 Hi, yes. Some users will come with potential fixes, but it might not be enough. At this point, a rollback to Monterey would work though. this seems to be a ventura vs SU2022 problem

Although for many users, the transition to osX 13 (ventura) went super well, it seems some people experience crashes and bugs (mostly people with big RAM count it seems).
Mac Os Ventura isn’t officially supported by Sketchup2022 yet, probably because Sketchup2023 is right around the corner and they don’t want to split the dev teams

So do we have to wait for the 2023 version of Sketchup?

So do we have to wait for the 2023 version of Sketchup?

Or roll back the OS until 2023 is released. Any time a new OS is released and is not listed as supporting a particular version, one can anticipate possible issues.

yes, at this time, a rollback is safer, we don’t know if SU2023 will be released in a couple of weeks or a couple of months.

It is generally a good idea NOT to update your work computer too quick. You can have nasty bugs (ventura has a RAM problem apparently on some machines with a lot of it) that will cause problem to your work, and not all your pro softwares are 100% compatible.

In that case, either update BUT be ready to rollback one version, or wait.
I generally wait a couple of months, that way I’m sure everything will run smoothly. And in the end, there are no “new things” in the new os that are absolutely essential to my work. SO they can wait a couple of month if it provides me safety to work.

Yes, you’re lucky. It seems it works ok on most ventura computers. Inflexion on the “most”. There are some cases where it doesn’t, and we can’t figure out yet. In these cases, rollback is the better option.

I don’t know anything about current Macs, but a thought:
In case SketchUp works with Ventura, did you install it before or after updating the OS? Is the computer so new that it came preinstalled with Ventura?

In case SketchUp works with Ventura, did you install it before or after updating the OS?

it’s a new Mac but it came with Monterey preinstalled . With Monterrey Sketchup works a little bit better

On monterrey the crash was less frequent

What configuration is this
Max? 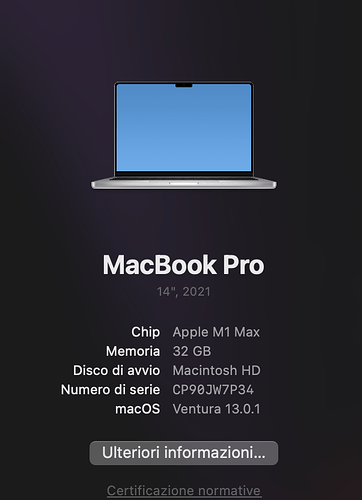 Alright, Mac OS is not alone. On the Windows 10 side, my i7 8gb with a 2gb video card crashes with any serious-size file. Fusion 360 handles the same files with ease. Is Sketchup 2022 Pro pushing me out, or what’s going on here.

I think Sketchup , and in my case also Enscape, do not keep up with operating system updates . I think we need to think about other better performing software.

crashes with any serious-size file.

How big is a “serious-size file”?

I think Sketchup , and in my case also Enscape, do not keep up with operating system updates

It’s difficult to keep up with operating system updates when the operating system gets updated two-thirds of the way through an application’s version cycle or sometimes several times throughout the application’s version cycle. This isn’t specific to SketchUp or Enscape. Application updates cannot be done instantaneously. The developers need to determine what changes are required to support the new OS and testing has to be done to make certain nothing is broken after those changes. The application also has to continue working for those who choose not to immediately update their operating system.

If the developers just made the changes and released an update without testing, you would be griping about being a beta tester.

Late in an application’s version cycle the company also has to decide where to invest resources. Do they pull their developers off of working on the next version to update the current version? This can result in delays in releasing the next version. Trimble had to do that a few years ago when Apple released a new OS version very late in the year which broke a number of applications including LayOut. Other application vendors had to scramble to update, too.

If you can find replacements for SketchUp and Enscape that update at the same time as the operating system is updated, let us know what they are.

I have no doubt that it is difficult to keep up with system updates. Given the amount of these updates it is deduced that applications will never work well . When you buy one of these , the developer though, at the time of purchase he tells you “compatible with Mac” but in reality it is not 100% . It would be more transparent to communicate that the software will not work well when you update the operating system . So the user can decide on it. Personally I use this software for work and finding myself with software that does not work properly because the developers prefer to focus their resources in the development of the future version and forget the already purchased version with which users work is somewhat disappointing . especially because they know that the next version has the same problems. I have always preferred to use free paid and non-abusive authentic licenses to avoid malfunctions and to promote the development of the same. But if the developer does not take care of the product he sold me to dedicate himself to what he will want to sell me in the future, I take it as little care of the customer.