I am trying to export a model from Shapr3D on the IPad to the new SketchUp app. The site says that it accepts obj and stl files but when I export out from Shapr3D they cannot be opened in SketchUp. Does anyone have a solution to this?

Hey @dukesr722 Thanks so much for posting your question here. We are currently working to build out a more robust set of importers and exporters for SketchUp for iPad – .OBJ and .STL are both on that list…

In the meantime, the solution (admittedly a bit convoluted), is to go to SketchUp for Web, in a browser, on your iPad, and import your STL there. After saving your SketchUp model to Trimble Connect, you’ll then be able to access it easily in SketchUp for iPad (the SKP file should automatically appear in your recent models list on the Home Screen of SketchUp for iPad).

Here’s a screenshot showing which buttons to tap in SketchUp for Web to get started with the import flow: 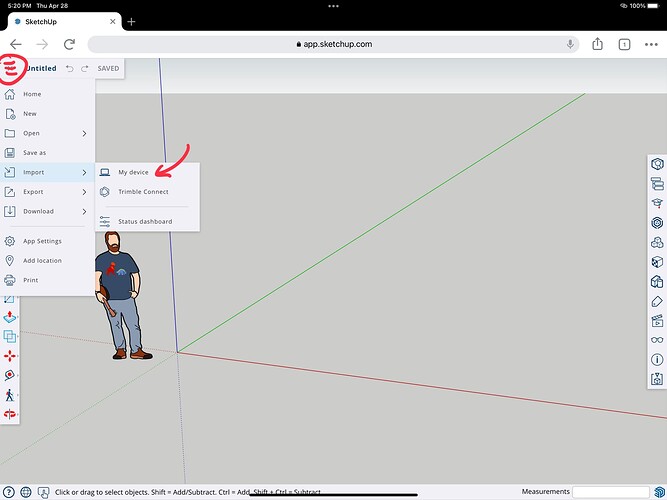 Thank you for getting back to me so quickly. Definitely a little convoluted but it worked! Thanks for the help!

Hello Mike,
Thanks for creating the new iPad version!
I have a similar question here - regarding using the iPad version to export dxf or dwg files directly. Would be great if this function or buttons (save, export, import, save as) will be available soon too (will this be on a iPad Pro version?). Would be great if we could export and import other files format directly using the iPad version - do you know when this update will be available ?

Hi Kate,
The presumption we’re holding is that we’ll keep getting requests until SketchUp for iPad supports ALL of the same importers and exporters as the desktop app

Thus far we’ve heard specific requests to improve the USDz exporter (so that it works with Procreate), and for us to add DWG, OBJ, STL, PDF, IFC, DAE (or perhaps glTF instead) and 3DS…

I’m not allowed to make promises – so instead, I’ll offer that it’s going to take some time… but we’ll keep at it until the checkboxes are checked.

Quick update here with news that today’s release of SU for iPad v6.1.2 includes the option to import STL files.

There are two paths available for importing STL files:

I managed Ok. Seems you need to group up each item in the model. But Im not sure about Layers. The problem is exporting from Shapr3D back into Skatchup on STL - so tesselated.

Why do you not allow to import in OBJ file on Ipad by the way? Would that be better for me?