Am I missing something? How can I import and export .stl files from the iPad app?

Hi @tree.bobby You are not missing anything.
SketchUp for iPad currently offers the following import options:

Along with the following export options:

references like what? having imports that are linked and can be reloaded?

Trimbim and ifc woud be great, especially if they arent stripped of meta data and can roundtrip from Sketchup to other software.

All of this should also be made available for Sketchup for desktop.

Yes, like the references you can load from within the collaboration manager in the desktop extension.
Note ‘manager’ so if a file gets updated, you’ll be notified and take action.

The trimbim format can hold metadata, btw.
But SketchUp doesn’t have an appropriate panel for it…

Skp native format should be trimbim then.

And that references manager is it @ene_su 's?

I must take a look at it.

No, I meant the one in the shipped Trimble Connect extension, currently, it only imports 3D models and .dwg’, but it would be nice if it could do the same for 2D images and pdf.

Mike From SketchUp Team,
I’m really disappointed in this rollout of SketchUp for iOS. Without import capability for basic drawing formats the platform is useless to me - a novelty.

I’m a professional user. I am willing to pay for a professional grade tool. For example, I use Morpholio Trace every day because they make a versatile app that I can use to create deliverables worthy of sending to clients, or just draw useful, scalable drawings to help me figure out what I’m building. They could double the price, and it would still be worth it.

I went for this SketchUp trial right away because if there’s a real version of SketchUp I can use on my iPad Pro to make precise 3D drawings, then I’m all in.

Maybe I’m missing something in the menus, but there seems to be no way of importing a simple .dwg or even a .dxf file.

Maybe I can remote into my workstation, import a .dwg into a SketchUp file on my desktop and then import that SketchUp file into SketchUp for iOS, but that defeats the whole purpose, I might as well just stay at my desk and keep working.

I can’t effectively evaluate this trial software without a way to input and output industry standard formats like .dwg, ifc, .stl, .pdf, etc., because everything we draw in SketchUp starts with a 2d drawing file as a basis, and often ends up being output as IFC to Revit for further development. All I can do with your trial today is play around with the interface. It’s not worth my time. I know you guys work hard on this stuff, and I appreciate what you’ve done here - it looks promising. Maybe in a few more months it will be ready for real work and then you can issue some new trials so we can actually run it through the paces on real projects.

This leads me to another thought that may be a more fundamental problem. It seems like Trimble really wants SketchUp to be a primary platform. Maybe it can be for some things (if Layout gets a real overhaul first), but for what we do, I think it is best suited to being an intermediate tool. That sort of tool needs robust in/out format options. 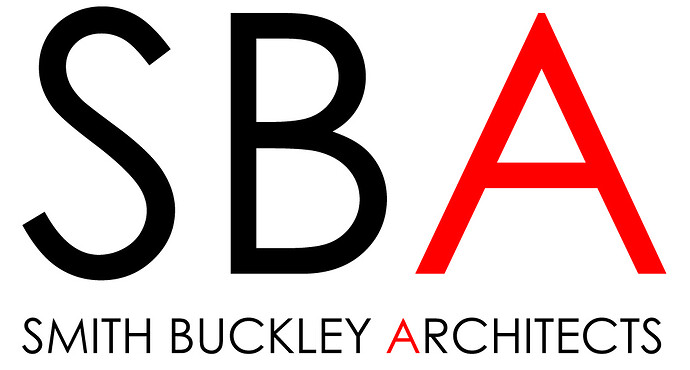 Thanks, @iz1 for all of the great feedback. You are not missing anything.

Along with the following export options:

That said, message received! Early days… V1 and all that, y’know? But we’ve got what we think is a very exciting roadmap out in front of us and we’re taking notes!

On the import side, you mention wanting to import 2D formats (presumably DWG and PDF)?
On the export side, it sounds like you’re trying to get from SU to Revit and are looking to export as IFC?

Am I missing any vital import/export formats?

Thanks for listening. I’m going to go a bit wider than the topic at first here because I think the context is important to understand my perspective as a user, but I’ll bring it home before the end.

I’m an old timer - I learned production drafting when it was done with plastic lead on mylar. That’s probably why I like Morpholio Trace so much. When I use it, it stays out of my way, and I can concentrate on designing. I have a similar fluency with SketchUp - when I draw with it, my brain doesn’t usually focus on the software - I’m not thinking about the commands at all most of the time. AutoCAD is the same way for me. I feel like an architect, not an operator. Anything that lets me mostly think about my design is great. Revit is different. I’ve been using it since before Autodesk bought it, but I’ve never been able to overcome the sensation that using it feels like piloting a 777 - constantly fiddling with switches and knobs to get it to do what I want instead of just grabbing the yoke and banking a turn. On one hand that may be something that goes with the territory of what I’m asking it to do - create coherent construction drawings from a single model. For all its faults, it does alright - I wouldn’t do a large project without it. But I wonder how much better it could be if I wasn’t constantly “dropping down” out of design thinking mode, to address the problem of what Revit “wants.” Someday, someone will do better.

If SketchUp could get to a point where it could handle sheets, views and annotations as efficiently as Revit while avoiding the klunky switchology that goes with it, you’d be onto something. I’m pretty sure it would look nothing like “Layout” does today, which works like someone thought desktop publishing software was a good model interface for drawing production. In my office, we wouldn’t use Layout if you held a gun to our heads. You know what we do? We export our scenes to .jpegs and paste them into Bluebeam PDF templates. It’s faster and easier 99% of the time. How do we dimension our SketchUp 2D drawings and print to scale? We almost never do. We have other software for that better suited to the job. But I wonder if perhaps SketchUp for iOS is an opportunity to re-think how your software handles sheeting and annotation so that immediacy and fluidity is maintained.

But to answer your direct question…

Quite often I want to bring something I’m working on into Revit, so going direct would be nice. But if I had to choose one or the other; Revit direct export or IFC export, I would choose IFC so that I have flexibility to bring it to other software besides Autodesk.

I recently used the method where you import (actually link) SketchUp to Revit as an model-in-place family, and that worked pretty well - definitely a method I’ll use more often going forward.

A 2D slice export back to .dwg /dxf is very useful also because honestly, all this new 3D tech is great, but sometimes less is more. I find myself these days spending more and more time trying to pare down the information to communicate what’s needed, and nothing more. Sometimes I just want to slice a plan or section from the 3D model and then draw it up in detail in AutoCAD because it’s the right tool for the job.

One other use case that could be really great would be to import a point cloud to trace in 3D. We’ve been using RTAB-Map on the iPad Pro to make reasonably good scans in the field - not entire buildings, but focused on areas during construction where we might need to make a quick sketch and we don’t have time (or speaking for myself it’s usually patience) to measure a bunch of pipes, conduits, etc., that we need to make a solution to work around. If I could export that point cloud from RTAB-Map and bring it right into SketchUp on the iPad and draw a quick sketch over it, that could be very useful.

Why RTAB-Map? Because it’s the best app on iOS for LiDAR scanning of building elements. It also happens to be open source and well supported. It gives me access to the actual scan, has detailed settings, and exports excellent point clouds (for an iPad).

Between Revit or IFC… IFC for sure. The amount of software that is or should be able to cope with it is definitely larger. Now it should be done right, following conventions and import and export.

Trimble Connect would benefit a lot if it had a nice architectural modeling app that dealt with IFC. Not only on the iPad, also on the desktop

Don’t forget the import and export of DWG format

I Voted for Import / Export STL

Okay, I have a Sketchup Pro Subscription for my Windows PC and to use on my IPad Pro. But, while I can import STL files into Windows, this doesn’t happen with my Ipad . This ‘explanation’ here just doesn’t work. Any attempt to import/open an STL file just shows a dimmed STL file. So?

Other people here were asking for STL import to be added. It hasn’t been added yet. You could import the STL on your PC and save the model to Trimble Connect, then continue to work on it on your iPad.

That strongly suggests it is a very desired feature on IPad version. Is it not possible to add it?

I won’t give .rvt files so much importance, I mean, during 2D era .dwg format clearly won its war, (unfortunately?) .dwg is like a 2D vector standard since… decades.

Now in the 3D-BIM ages we have this IFC open standard, and I would invest everything on it.
Why invest into a .rvt importer/exporter and not into a Archicad or Vectorworks or Rhino one?
IFC (with OBJ, gITF and USDZ) should rule them all (.skp included).

Quick update here to let you all know that with today’s launch of SketchUp for iPad v6.1, we’ve included two new exporters for STL and OBJ. Your feedback influenced our prioritizing these exporters for 6.1. So please, keep the feedback coming!

(Note: the OBJ exporter does not support exporting textures)

Import obj/glb? For organic part of my model I hope I can model them using sculpting software such as nomad sculpt