SketchUp suddenly in the last day or two started giving me bug splats again, usually after a lengthy edit and usually as I am saving - the save seems to work, but not always. This has been happening on various files small and large and I haven’ t installed any new plugins or updated anything (as far as I know). Anyone else seeing a change in behaviour? Or is it just me?

When you suddenly start getting weird behavior with software, the first step is to figure out what changed on your computer. SketchUp 2022 hasn’t changed recently so then, what has? Perhaps a Windows update or a graphics driver update. Your profile indicates you have an Nvidia graphics card. Make sure that’s the one set to be used for displaying SketchUp. Sometimes Windows updates will change the default to the integrated GPU without telling you.

Another thing to consider, since this seems to happen during a save (and maybe autosave?) is where is the file being saved? Hopefully to a local drive. Could that drive be having issues?

A third thing could be some recently installed extension. Did you add any extensions at the time this started happening?

Although it won’t help with graphics driver or hard drive issues, you could make sure that SketchUp was installed correctly. That requires right clicking on the downloaded installer and choosing Run as administrator. If you didn’t do that or don’t remember doing it, get the latest installer from Download All | SketchUp, right click on it, choose Run as administrator and then when prompted, Repair.

You say you are getting Bug Splats. Are you sending in the reports with your e-mail address so they can be linked to you? Might be that @colin would be able to look at the reports and see if there’s an indicator of what’s happening.

I couldn’t see any bugsplat reports. I would go over what Dave suggested for now.

DaveR
Thank you for your suggestions. I only posted because I really didn’t feel that I had consciously changed anything in my SketchUp setup recently, but I did get a windows update recently (which hadn’t occurred to me as a possible cause), so perhaps that’s it, I will investigate. The file is being saved to a local drive, it is backed up to the cloud by Dropbox, but I know what it looks like when I catch Dropbox backing up (usually just requires a read-only open). No extensions added recently. Yes I have been getting bug splats but to my eternal shame have been killing them, TBH I didn’t really think anyone looked at them, but if it happens again, I will fill it in and send it.

Thank you for your prompt response,

As I said to Dave, I am guilty of just cancelling the bug splat reports, I will fill them in in future.

Since I last emailed I have had two more bugsplats which I have reported, I would be grateful for any insight you can glean from them.

I looked at both of your bugsplats, and they seem to be for different, but possibly related issues.

You have a few interesting extensions, most of which seem to be on the latest version. Except for Fredo6 LibFredo6, which claims to be version 1.0, when the current version is 12 or later. That may be a misreading, @Fredo6 could tell us.

I think that you have a not for profit license from Elmtec, it’s worth getting @Elmtec-Adam involved as well.

Hello Colin,
As a matter of curiosity what are those “different, but possibly related issues”.

LibFredo6 reports version 12.9a via their user interface, so perhaps a misread, or maybe just that the library misreports its version in the bug splat dump? See attached.

I do have a not-for-profit licence, because I work for a charity that refurbishes buildings for community use, so yes I can get Elmtec-Adam in the loop. 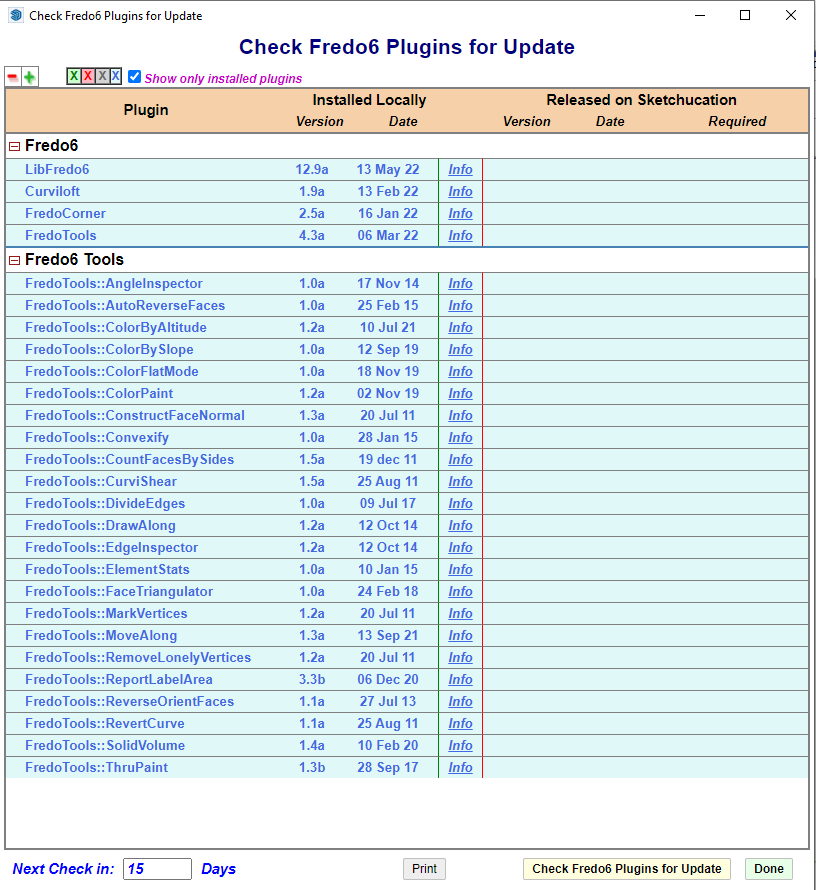 There is a thing called DBListener. I don’t know exactly what it is, but it seems to be used with undoing and redoing. One of your crashes happened with a RemoveDBListener, the other with a AddDBListener.

I can ask the developers tomorrow for any thoughts about what is leading to the crash.