I can’t enlarge or resize tag column. Could you please kindly advise for the issue 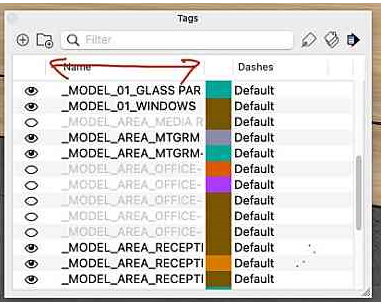 Known issue a good while back, which I thought had been resolved.

See if this old thread helps.

Yes, see here for other reports, and some possible work arounds: We do have a bug report logged about the issue.

You say the issue is on a Mac but your forum profile says you use Windows 10.

Which is it? Or do you use both Win and Mac?

The names column in the tags window is not and has never been user resizable on a Mac. Sigh.

There was a bug that has been squashed I believe that prevented the names column from expanding automatically to use a shared portion of the window width. This bug was circa SU 20 so if your profile is correct in version at least you might be experiencing this, if so upgrading is the only solution. But this did not affect the users ability to set column widths manually.

The only current solution to see more of the name is to have a wider tags window.

It’s really a drag because I’ve had to resort to ridiculously abbreviated names in order to read them in the window’s smallest view. It’s particularly frustrating because I rarely need to see the dashes column and never use the color column. Is there some huge coding challenge that explains why SU hasn’t fixed this long-standing problem?

Being able to hide the color, dashes, and active tag columns, would give you more space for the name without making the palette wider. I don’t know of any work being put into that option.

On Mac you could make the palette be very wide, and place it at the right of your monitor, to only show the visibility and name columns.

On Mac you could make the palette be very wide, and place it at the right of your monitor, to only show the visibility and name columns.

I concur, it really is a drag. I wish some work were being put into that option. Thanks for the update though Colin, I’ll keep praying.

Being able to hide the color, dashes, and active tag columns, would give you more space for the name without making the palette wider. I don’t know of any work being put into that option.

Are you saying that you don’t know of any work being put into hiding columns, or no work into fixing the bug?

I appreciate the reply and don’t mean to shoot the messenger, but are we to understand that SU has no intention of fixing this bug? If so, that’s a pretty direct snub to Mac users.

Are you saying that you don’t know of any work being put into hiding columns, or no work into fixing the bug?

It still not clear to me which you are experiencing. If when you make the tags pallet wider on the screen the name column fails to automatically expand to take up a relatively larger space, then you are experiencing the older bug which has long since been fixed in subsequent releases. Update your version to fix it.

If you would like to be able to adjust the columns manually by clicking and dragging the dividers, you’re out of luck as bringing this feature to the Mac interface does not seem to be a priority at this time, or is too difficult to achieve.

You’re correct–I was conflating the old bug with the current problem. But I still consider the inability to adjust the real estate in that window a bug, even if SU doesn’t. Those of us working on single monitors (a laptop in my case) need as much flexibility as possible to manage windows and tool bars.

When trying to solve the older bug, where the name column’s width got stuck, the developer did try making all columns resizable, as an easy way to work around the issue. That would leave all of the effort of getting the columns to the right sizes down to the user, and it still wouldn’t let you hide any given column. The work around led to other issues, and so the developer tracked down the real cause of the problem, and fixed it.

The name column is the only one that needs to be resized, but the idea of hiding columns is reasonable. One difficulty is how to show a column after it is hidden. Here is how Jira (the system we use for logging bugs) solves the problem: 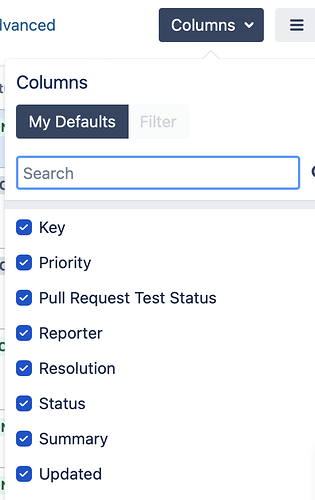 SketchUp doesn’t have as many columns as Jira, so maybe the search feature and presets may not be needed. It could end up looking like how you control the default tray on Windows, with a checkbox next to each column name.

I don’t think anyone is working on features like that, but there is always some UI related work going on. @kathy_davies would be the right person to at least hear about the request to hide columns.

Thanks for the comprehensive reply, Colin. The drop down menu with check boxes could work, but seems like it could be simpler. Rather than hiding the column entirely, how about clicking the column name at the top to toggle expanding it? The colors column is already pretty small, but the Dashes column is the real space hog in this window.