Here it is. I did try what I believe is the Dave Method and scaled it up 100 and still got some anomalies - different ones but still odd. Good luck. What is Uploaded is the 4’ square table at the proper thickness with the edge welded - all should be ready to Round. I was using 1/8" for the offset.
Component_1.skp (33.9 KB)

How did you round the corners? It’s strange because there’s an extra softened edge on the rounded corner nearest the origin.

FWIW, The Dave Method doesn’t work with groups. You need to use a component. First, though, we need to sort out that extra edge.

What radius do you want the corners to have? They aren’t all the same in your model. 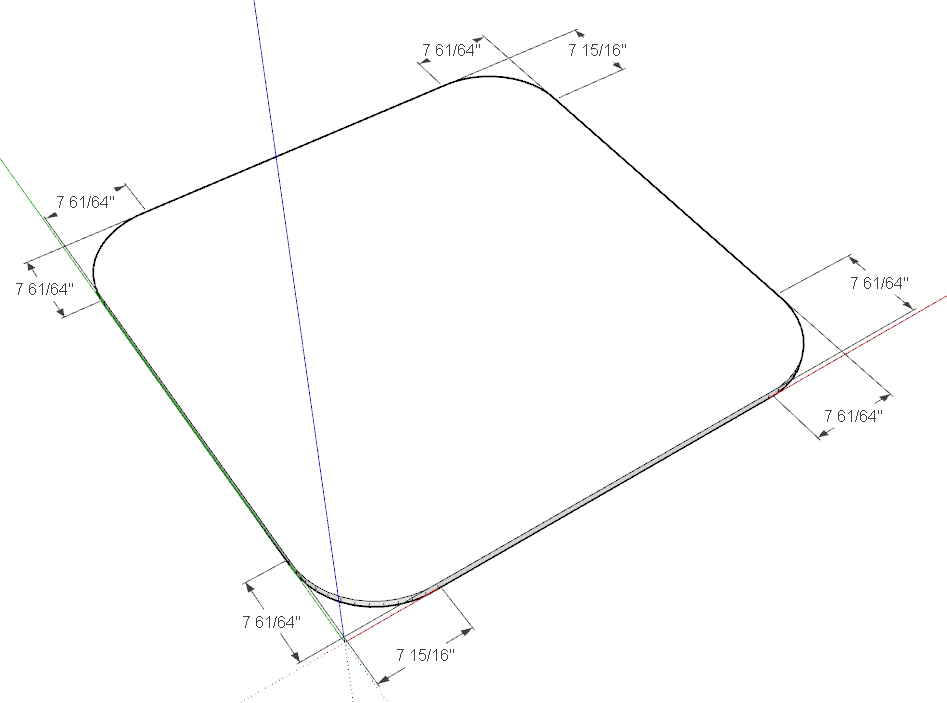 I made a centerline along the diagonal. Offset either direction 5 5/8", then made a 2 point arc from where these lines intersected the edge with a 2.5 bulge. So, in summary, the rounded corners should be 11 1/4" apart with the 2 1/2" bulge. I am at a loss as to where the discrepancies could’ve come from. My guess would be rounding, but that still doesn’t seem right. The arcs forming the rounded corners are not necessarily tangential.

It would be hard to see the discrepancies because you are using Architectural units with precision set to 1/16". You also have Length snapping enabled which can get in the way.

Is there any reason you couldn’t make the arcs in the model tangential?

I wonder if when I made the table, I used an 8" radius for those corners. If the table as drawn is exactly 48" square and the corners are exactly 8" radii, will … ?

I’ve been playing with it since I posted the screen grab showing your weird dimensions. I used 8 in. for the radii and have no trouble getting the rounded edges. It works fine without using The Dave Method. 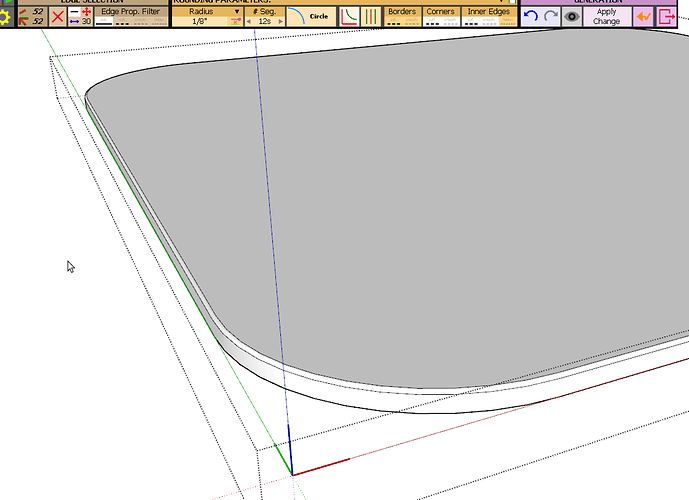 Watch out about my on weird dimensions! Are you overly integer-centric. 7-61/64" is just as full-blooded a dimension as 8" is.

So, maybe it is a combo of SU’s precision and of rounding?

I am trying it now.

The Precision setting really only affects the display of dimensions. That, of course, makes it difficult to see small discrepancies when you are checking dimensions. Although I don’t generally work to 1/64th in the shop, when I’m modeling in factional units, I set Precision to 1/64th in. so I can easily identify problems if they arise.

Yep, it worked fine with integers. And, just between you and me, I would guess it would work fine if every corner were 7-61/64" - every one of them. I am not going to try it. I’ll work on cutting blocks and solid tools now to create the rule joints.

BTW, when I ran Solid Inspector 2 on my now-rounded slab, it showed 416 short edges THOUGH my Entity Info shows it to be a Solid Group. Curiouser and curiouser. 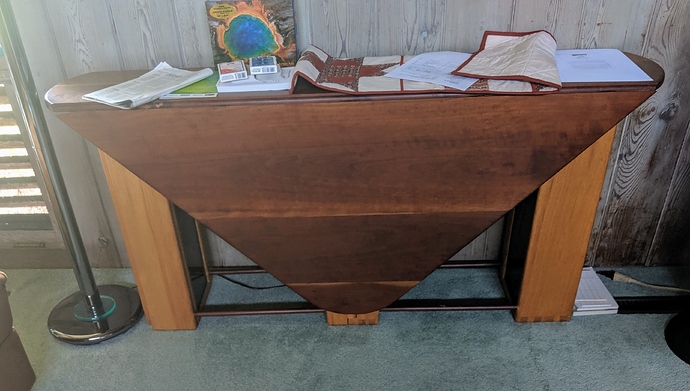 I don’t think there’s anything to inherent in short edges that would prevent the group from being solid. If there was, the parts in these jacks wouldn’t be solids but they are.

Interesting table. Did you design it yourself?

I did, and I’ll take that as the nicest of compliments. The “gates” swing out, one on each side. And the center “legs” have tambour sliders and shelves within - filled with pinochle and bridge decks, maybe a coaster or two.

So, “short edges” means that two edges (lines) don’t quite meet? Is it possible to redraw these and “fill” them in? I know Aaron seems rather adroit at fixing this kind of geometry during some of his Friday shows.

Oh, did you notice that I didn’t clean house for your picture? 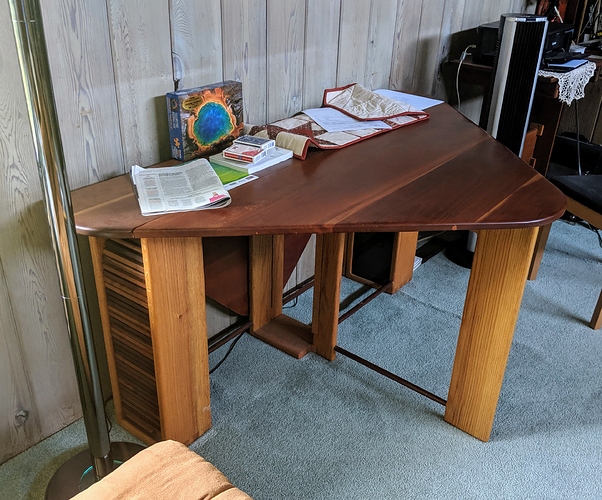 No. The edges must meet to form faces. Even very tiny gaps will prevent faces from forming.

You might be able to eliminate the edges and replace them with a single straight line but not if the edges aren’t colinear.

I did notice you didn’t clean off the table for the picture. You must be getting comfortable here.

I guess 32 years gives you time to get comfortable. So, that answers the question of how old the table is. The table is more than 32 since I built it in the basement of our old house. Cherry and oak do hold up well, probably better than I.

As for the short edges. I think you’re running into a feature of Solid Inspector that detects edges smaller than a certain user defined threshold.

While the feature doesn’t actually make a group/component “not solid” you can disable it. See this post/thread: Not a solid - short edges - #19 by IanT

Thanks for the explanation. That would explain why, when I reduced the setting from 1/8 to 1/16, I got no or at least fewer edges. In a way, is it a short edge inspector/detector?

If you set have it set up to detect the short edges it is a short edge detector. But in the thread I linked to, quite a few users were a bit mystified by the short edges the Op reported. So my guess is that it’s a feature that isn’t used very often. I think most folks primary concern is whether it’s a solid or not, rather than to detect how many edges under a certain threshold are in the selection. But, I’m sure the short edge feature has its uses.

I don’t think it’s a default setting to have it turned on.

I would agree, I don’t think I’d seen it before that thread.

Okay. The corners are rounded. All the cutting and trimming is done. And short edges are ignored. It looks almost as good as the table itself.

Thanks for your quick and tireless help, guidance, and of course patience.

On to the legs! (maybe tomorrow)