Order of colors of diferrent objects

I have an issue with colors of different objects on top of each other. Now it is not showing all the bottom of the walls or insulation in red, but instead the color of the floor (that is part of the object below it). How could I define myself which color is visible. No way to order ‘tags’ for example? 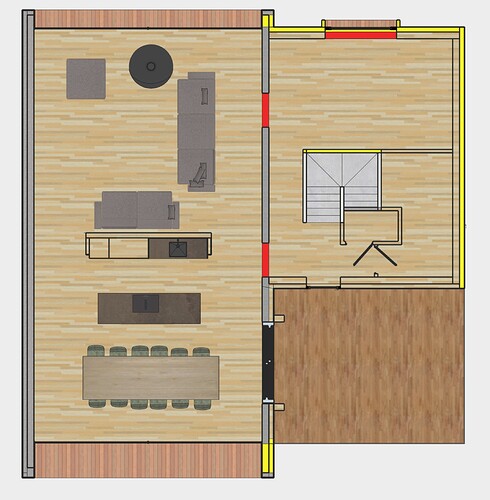 SketchUp is a 3D modeling application. If you want something to appear in front of something else it needs to be closer to the camera. Move the objects like the furniture up above the floor.

Tag order would not matter in a situation like this even if you could change it.

If this is SketchUp (not Layout), then the visible order is derived directly from the 3D positions of the faces in the model. If face A is closer to the camera than face B, fave A would be visible (assuming no other obstructions, etc.). SketchUp tags have no bearing on the 3D object rendering algorithm (other than to include or remove an object from being rendered entirely). Two faces that are co-planar will typically exhibit “z-fighting” in the rendering process, where nearby pixels will sort of arbitrarily be drawn from one face or the other, as the graphics processor cannot make a clear uniform choice between the two faces at the same depth (same location) in the scene. You can often raise one face a bit above the other to ensure the desired rendering result.

Thanks for the quick feedback!