For some reason, this model consistently fails to scale using the tape measure method of scaling.

I select all, measure with the tape from central origin to apex (centre point of the red pentagon above the origin) and click on the apex.

The model moves a little, but the dimension that should become 20’ is unchanged.

Does it work for you?

If so, what am I doing wrong?

I am able to scale it using the scale tool and uniform scaling, but because it isn’t symmetrical about the origin, I can’t usefully scale it to a particular and exact 20’ with the scale tool.

I originally scaled it down from a 20’ radius by a scale factor to OO gauge scale (1:76.2 or 4mm to the foot, scale factor 4/304.8 = 0.01312335958) and foolishly started to work on it at that scale, and using Scale Definition to reset all the components to their new size, but instead of the radius coming down to 80mm , it ended up as 90.4mm and I didn’t notice immediately. I copied the scale factor from a Google Chrome calculation of 4/304.8, so I didn’t think I could have used the wrong scale factor through a typo.

I can fix it by first scaling down by 80/90.4, then scaling up by 76.2 and slightly to my surprise that does give me an exact value of 20’ for the radius, but I’m curious why the tape measure method doesn’t work.

Are you seeing this message when you try to resize with the Tape Measure tool? Are you just clicking Yes? 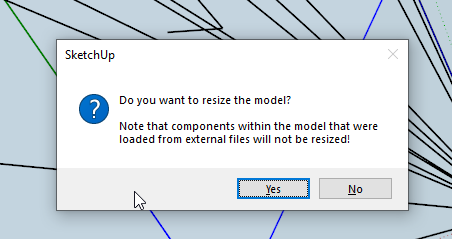 Yes, I’m seeing the message, but as far as I know, there aren’t any components ‘loaded from external files’ - or at least I didn’t think there were. I copied and pasted from another model, but I don’t think I loaded anything from external files, at least not using ‘file import’ or Reload.

Or does that count?

Sorry John, there are two components loaded from external files. “Temp geo” and “Hub set - repeating @10’R” both have loaded from paths.

Thanks very much, both @DaveR and @slbaumgartner.

Stve and/or Dave, how did you see they were loaded from file? If I were to cut and paste from another model (which I thought I had done, but perhaps not) would that avoid the issue?

Could I explode then remake them into components?

Or how else can I unlink them from their external file?

how did you see they were loaded from file?

In the components window I chose Edit. The edit panel shows the load path. I think that because it loaded from an external file, I had to explode the Temp geo component before I could see its nested components to find the Hub set’s path.

Explode and then immediately make a component (the original nested contents will be selected after the explode) will clear the path. But it will leave both the original and the new definition, so you may want to purge to avoid confusion about which is which.

Would cut and paste from the older model have worked without needing to explode and regroup?

I don’t know for sure - try it and see. I have an early meeting tomorrow, so signing off for tonight.