The Bug: I am unable to resize the tool trays when they are pinned to the workspace. They each consume about 40% of my workspace leaving me very little to work with in between. The only way to return the tray size to normal (about 15% of the workspace) is to unpin it so that it auto hides to the side. As soon as I pin it, the tray width shown below is as narrow as it will go. I imagine it has something to do with switching my screen resolution settings as described below. It seems Layout is stuck to a 4K scale setting that is no longer in effect… Is there a way to reset this setting? 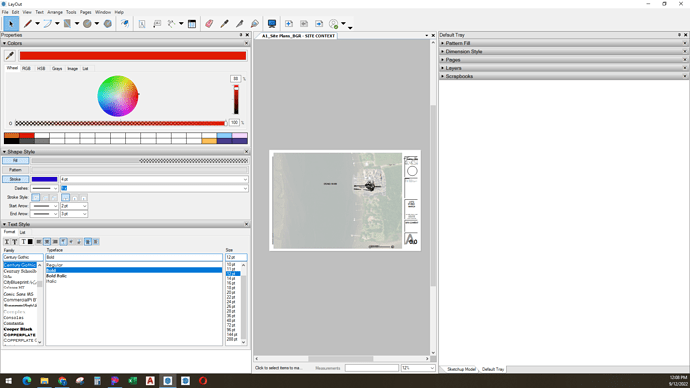 I have been experiencing this issue for the past few versions and it just reoccurred for the first time in 2022. I am working from an Asus ZenBook Pro Duo 15" laptop which has a UHD 4K main screen and a similar UHD secondary screen above the keyboard (3840x1100 Resolution).

When I’m on the road, the built-in secondary screen is great as it gives me a spot to have my SketchUp tool pallets and Layout Tray’s so they don’t consume all of the screen real estate on my primary screen. Because the secondary screen is a non standard ratio, it only has the ability to be set at it’s UHD, 4K resolution, requiring the main display to also be 4K.

When I am at my desk, I have a two 27" 1080 HD monitors I prefer to work from. I disable the built-in secondary screen and downscale my laptops 4K screen to 1080, this gives me three 1080 HD screens with consistent scaling across each.

I have no need to work in 4K, and there is definitely a performance advantage to only rendering 25% of the pixels in the SU window. Performance advantages aside, neither SketchUp or Layout really seem to like 4K displays, the tool pallet scaling is all over the place, especially for 3rd party plugins. If it weren’t for my UHD secondary screen, I would leave everything set to 1080 and this would probably not be an issue.

Well… After fiddling with the UserDockLayout.xml file in the AppData\SU\Layout folder I was able find a “MinimumSize” parameter that was set to 700 for each of my three trays. With find-and-replace I changed all of the 700 values to 300 and this seemed to work… On first launch… On subsequent launches Layout now crashes immediately, not even generating a bug splat.