Logged in to keep working on a project from a few months ago. It isn’t there. My older projects still are. Is there something I’m doing wrong? I’ve checked trimble connect and everything and can’t find it at all.

Nearly every time a SketchUp Free user reports that they can’t find a model they made it turns out they’ve signed in with the wrong email and password. Even when they insist they only have one account it turns out they have more than one. Make sure you are using the right account.

Unless there’s some strange way to have two accounts using the same email I don’t think this is my issue. I’ve tried logging in with different emails and none of them have the project.

@colin might have a chance to investigate at some point. I’m sure it hasn’t been deleted.

I guess since you are using SketchUp Free this is a hobby project for you. While you wait for Colin to dig into it, you might go ahead and start remodeling it.

There are different regions, try going to this page:

First see if the missing model shows up right away, in one of your projects. If it doesn’t, look at the menu in the upper left, and try the other two regions, in case you saved something there: 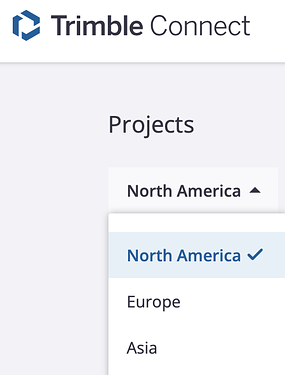 Only two of my older projects in the NA project folder. Tried the other two regions and nothing is there.

Unfortunately, your name is more common than I had hoped, which makes it hard to check whether any of the many people with your name is also you. The models being under a different email address is still a possibility, if you can think of any other email that you might have signed in under.

For your interest, Gmail emails don’t care whether you say firstlast, first.last, fi.rs.tl.as.t. All periods are ignored, you will still receive the email you were expecting. For Trimble though, first.last is seen as a different user to firstlast. Which means it is possible from one email address to appear to have two accounts.

But, I checked for that, and I don’t think you ever leave out the period.

If you can remember the name of one of the missing projects, I have colleagues who should be able to search for the name to see what account that project comes under.

Is it possible that it wouldn’t autosave somehow? I’m wondering if I maybe just never manually saved it and it closed during a windows update or something.

I’m wondering if I maybe just never manually saved it and it closed during a windows update or something.

I think you’d have to have saved it once to get autosaves afterward. If it autosaved untitled files I would have hundreds of them from opening SketchUpfor Web to make demo files. I close those without saving and they are gone.

That’s probably my problem then. Must’ve lost it.