For one of the designs I’m working on, I needed a bezier curve - which Sketchup Free does not support.

It looks the only vector format supported by Sketchup Free for import is .skp.

So I opened InkScape, drew the bezier curve I needed, and exported to an .svg.

I’ve tried 3 different online .svg to .skp converters by now - none of them produce an .skp file that Sketchup will recognize. I get different errors, such as “cannot import empty component” or “invalid file format” and so on.

Is there any tool (online or offline) that can correctly convert .svg to .skp?

Or do I have to buy a subscription? Just to get a single bezier curve into my design…?

Can you show us the curve you want to create?

As mentioned, it’s a bezier. I struggled with the circle tools for a good hour before realizing the problem - circle sections just won’t give me the “curve ball” shape of a true bezier, if that’s what you were thinking? 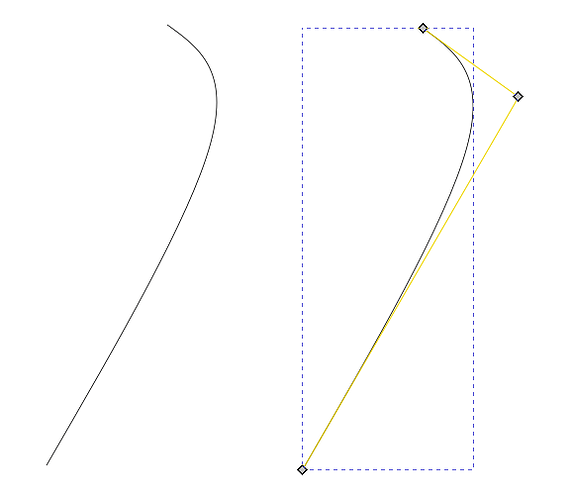 Would this be close enough for you?

The one in the video above is simply 5 curves done with the normal 2 point arc tool, each successive curve will follow tangentially from the previous one.

Hmm, I don’t know, I seem to have a lot of problems with the circle tools…

They snap excessively, preventing me to drawing smaller/finer curves - disabling all the snapping options seems to have no effect on that.

And I have trouble seeing whether it’s staying on the plane - many times, I thought I had the curve I wanted, but then I leave the parallel projection view and discover the curves are going in some other direction away from the plane…

What are you modeling? Perhaps it would be easier to work at a larger size and scale down.

Draw a large rectangle to work on and watch for the On Face inference messages.

Okay, after a few more attempts, I finally managed to reconstruct the curve out of circle segments on top of an imported image. Being able to snap to the image surface was actually helpful.

What a cumbersome waste of time though.

If anyone knows of a tool that can convert any other format to .skp, please share.

What a cumbersome waste of time though

If your time has any value SketchUp Go or SketchUp Pro would certainly be worth it even though this is a hobby thing for you.

So for one or two hobby projects a year the free version is a good option for you and the few seconds more it takes to draw curves as Box showed is really not a big time investment. Seems like a decent trade-off.

What a cumbersome waste of time though.

“Tracing” an imported image with the ‘2 Point Arc’ tool. Rather easy: