Good day,
I have Sketchup GO (which is not a category I could find in the Community).

Any view?
Thanks and regards

I have Sketchup GO (which is not a category I could find in the Community).

The category name should be updated from Shop but hasn’t at this point.

It does indeed seem to imply that there however it’s not listed on the Import window. I expect there’s an error on the Help page and that should be updated. @colin might be able to alert the proper “authorities”. 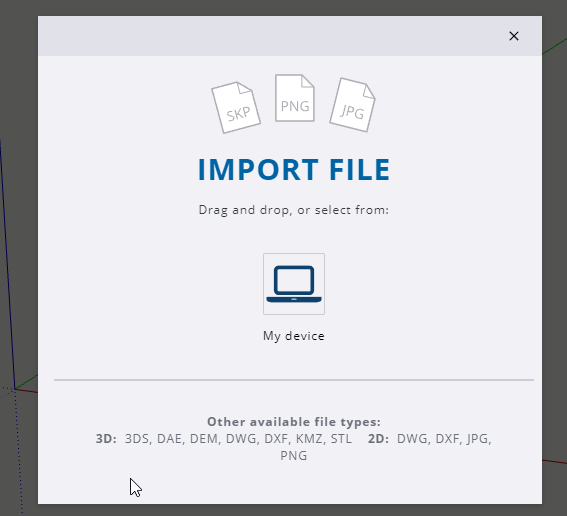 Thank you for the prompt answer.
I don’t want to be nasty or anything, but hey it is published here “What's included with SketchUp Go | SketchUp Help” and as such should be made available. This is not (for me) just a mistake to be corrected somewhere. It’s like you buy a car that has leather seats and at the delivery time you realize they are wooden seats and you’re told there is an error in the folder.
Thanks

the GO version could import OBJ. 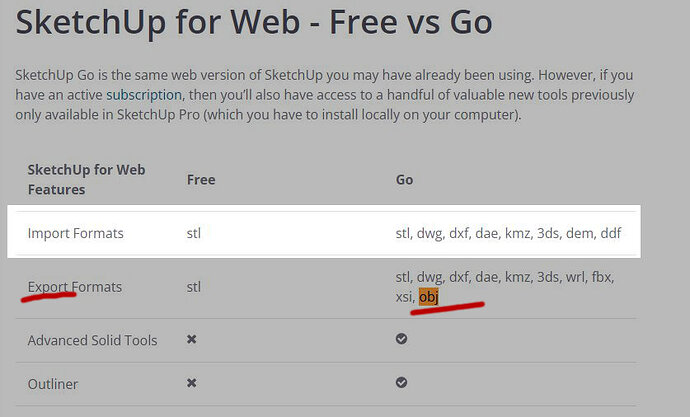 OH yes…indeed, it is the export…damned.
No chance for me to import an OBJ then with GO?

Sorry. The folks who write the help files are human. They aren’t infallible.

At least for the moment you can use an online converter to convert the OBJ to STL and import that. Or you can use SketchUp Pro which does import OBJ files with freely available extensions.

Thanks, it was my mistake, in GO you can export not import an OBJ.
My bad, sorry.
I’ll first try to convert.

No, it doesn’t. But there are extensions.

I converted the file. I tried 3 converters and finally found one that does not create an issue when uploading in sketchup. Thanks

Can you go via Collada instead of OBJ?