How to create an internal chamfer to a square table leg

I’m trying to make this table in Sketchup, but I cannot get the internal flute to work on the square legs.

I’ve been trying to use the follow me tool to create it, but it doesn’t seem to want to work…

Any help, or advice please? I’m relatively new to sketchup - I’m just starting to get to know the tools…

the way I create those is to draw a “cutter” shape that can be intersected with the table leg using Intersect Faces. Then erase the unneeded stuff. I’ve done at least one tutorial showing that. I’ll do some hunting.

I don’t know what profile you attempted to use along what path, but I don’t think followme is the best tool for this job. As usual, Dave beat me to the reply with what is the more typical approach!

Thanks for the response. I’ve been searching for what feels like hours, and all I can find is how to do external shapes and chamfers… surely this should be simple enough, to take a square and ‘Scoop out’ a part of the corner? It’s making me dizzy!
I have made the shape that it needs to be, and now all I need to do is to join it as an internal curve… Would love to see the tutorial you mention!

Thanks for your reply.

In this picture, you can see the blue path i’m trying to follow, with the face highlighted that needs to follow that path.

I haven’t tracked down the tutorial yet, but here’s a topic with some examples of how this is done on a cylinder. The same idea applies to your square leg.

I have a commission to render a kitchen. The island has a round fluted column. I’d like to include the flutes in the rendering, if possible. I’m using Podium for the final image. [image]

Follow Me just isn’t the right tool for the job.

I didn’t get to the old tutorial I was thinking of so I just made something new.

From left to right:

I used the same basic method to make the stopped chamfers on the stretchers of this hayrake table by Mike Pekovich. 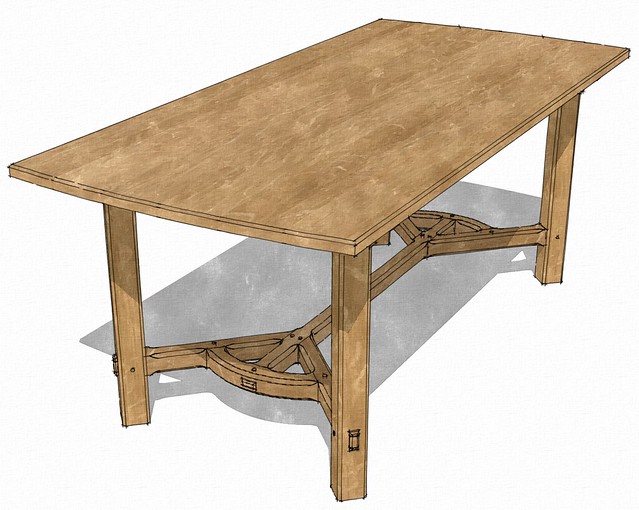 1 Like
Surprising Outcome from Visiting the Forums
slbaumgartner September 9, 2016, 1:38pm #8

As you may notice, the method Dave sketched creates a flat-bottomed flute. The ones I cited create a round-bottomed flute. So, choose the one that corresponds to your actual need!

Amazing, thank you - I have some learning to do on how to position the cutter where I need it, because it’s going wherever it wants at the moment! I can see that this will do exactly what I’m after, so thank you so much!
I’ll report back when I’ve managed to do it - But I strongly advise that you don’t hold your breath while you wait in anticipation!..

I can certainly see the use in this as well - maybe a little more advanced than I need at the moment? I don’t know, I shall but play! Thanks!

I have some learning to do on how to position the cutter where I need it,

This is where guidelines created with the Tape Measure and Protractor tools comes in handy. I set out some guidelines to help me draw the cutter exactly where I wanted it so there was no need to move it into place.

And you’re quite welcome.

Not to belabor the point but the idea of drawing a cutter shape to intersect is a good one to get a handle on. The same idea was used on the legs for these old Italian side tables. As well as on on the rooks and knights in this chess set.

And to cut the slots in the bell for the fan pulley supports on this finishing booth blower. 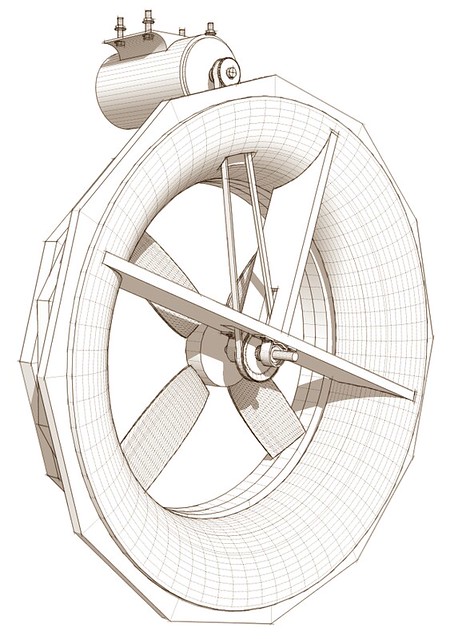 That’s some seriously impressive work!
I might get to that level in about 20 years!

I can most certainly see the advantages , so all I need to do now is practice and set to mastering the technique…

Thanks again for your extremely prompt responses, and superb advice.

My attempt at using your techniques has pretty much done the job. I know it could be better, but not bad for a first attempt!
Any particilar reason why I have those ‘lines’ going across at the base of the curved cut? I notice yours doesn’t have those, but when I try to delete them, it deletes the whole face…

Thanks again for all your help.

Those lines are coming from where the ends of the arcs meet the vertical lines. This is normal. You can get rid of them by Clicking on them with the Eraser tool WHILE HOLDING the Ctrl key.

I was able to made the flutes on the island’s columns only to find when rendering in Podium that the level of details was a) not visible on the render due resolution of output devices, and b) added to the SKU’s complexity to a point that pasting and moving was becoming totally unstable. In fact, I had to remove all kinds of detail levels throughout the drawing to make it manageable including reducing curve complexity on crown molding, base boards, etc.

That’s interesting. I’ve never run into that with Kerkythea nor ever read about anyone having to do that with other rendering apps. Does it just slow things way down in SketchUp with Podium?

Thanks - I’ve been tinkering with Sketchup for a while, but only just starting to really get into it.
Been trying to upload my model, but having all sorts of trouble with my computer. Although, my advice to you would be the same as I’ve received previously - create your own model, and ask for help as and when you need it.

Your model looks great though!
I’ve had to increase the size of my grooves in order for them to be visible in my designs, but other than that, my software renders everything a treat.