Having problems with making Components snap to one another

So I am new to Sketch Up. I used it before years ago, but it is so different now, I may as well have never seen it before. I’ve seen a few videos on how to do the basics, and I can do a decent job I think. I can replicate all the tutorial lessons without watching them, now.

And I have seen other videos on YouTube which are a little more advanced. Including one on making cutlists, using components to label various parts of the design as plywood or hardwood, etc. So I am trying to use that functionality. Which I am finding to be VERY difficult.

Because instead of making a cube, then offsetting it and using push/pull to make it hollow, then cutting out rectangular portions of 4 of the remaining 5 sides to make a table with 4 legs, I now want to make a discrete table top as a component, then a discrete leg as a component. And then add in 3 more legs. So far I am good with doing this. But then I have to align the table top with the 4 legs. And make sure all 4 legs are properly aligned with each other.

Is there any way to have two copies of a component, or two separate components, snap face to face, or edge to edge?

Is there any way to use a set coordinate to place a component by typing in three measurements (from the axis point/center)?

Is there some other way to do this which is easier than those two methods? Or even if not easier, relatively easy enough (assuming the above two methods aren’t available)?

It sounds to me as if you are approaching it the hard way. Take a look at the video in this link to get an idea of a more efficient work flow.

Instead of trying to move the top into place on the legs, place the legs where they need to be and draw the top on top of them. Make sure you are creating components of the discrete parts as you go.

As for snapping components into place, grab the moving component by a corner that will snap to a corner in the neighboring component. If you just grab the component on a face, you don’t have any way to snap the corners together.

You could use coordinates but for this sort of thing, that would make your work even harder.

Thanks - I think grabbing by the face was the mistake I was making!

As to moving components by coordinates - I tend to prefer typing in specific/perfect measurements for items, rather than drawing them out. Likewise, I would much rather place items perfectly where I wish, by using coordinates. Unless it is ridiculously more complex. I don’t mind spending a little more time to be a little more OCD about placement; but if it is far much more work, I can settle for snapping corners together.

I have yet to find any information on being able to do so. Is it actually possible? How is it done?

I draw furniture plans in SketchUp professionally and would never make it if I had to know and enter coordinates for every part. That’s way too much work, it’s inefficient and not needed. But, if you prefer working harder to smarter, you can enter coordinates for moves. It is explained near the bottom of this page

Even a furniture model like this one, which is fully detailed for plans with all the joinery and hardware was done precisely and without entering a single coordinate. 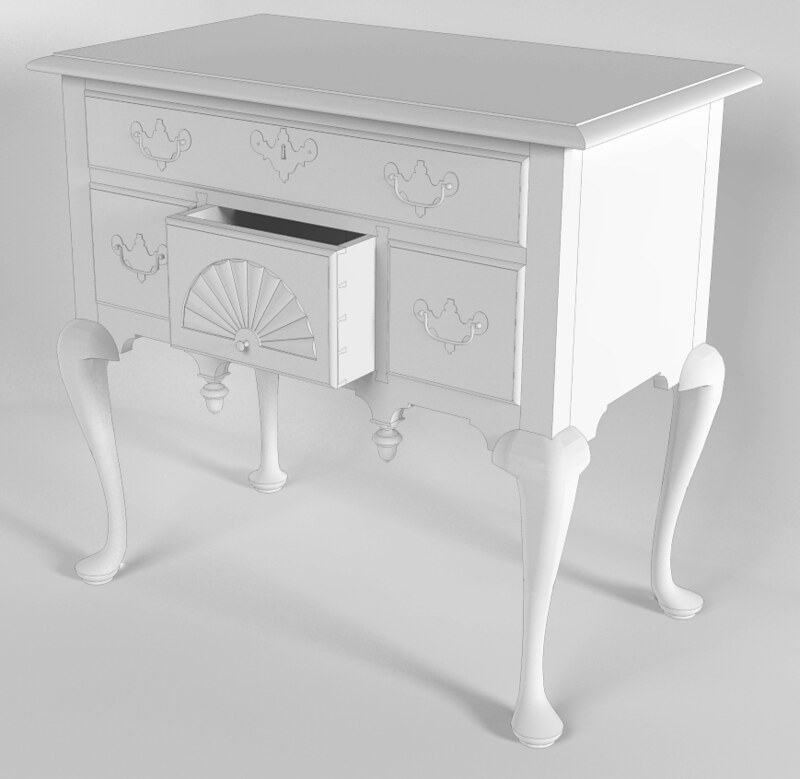 Is there any way to have two copies of a component, or two separate components, snap face to face, or edge to edge?

In SketchUp, objects don’t snap into each other. Your tool cursor is the thing that snaps to inferencing points. So it is important to place the cursor correctly when starting a move.

Some other applications have objects snapping to each other. Well implemented, it is a great feature (Revit, Archicad) but done badly a nuisance - I haven’t yet found a way to use it productively in AutoCad.