Back here again with a problem that I have experienced before, but has come back with a vengeance. Dragging a select box, left or right, hangs up and crashes SketchUp. Sometimes my Mac OS also crashes and need to reboot. Have rebooted several times this AM.
Any ideas? Thanks. 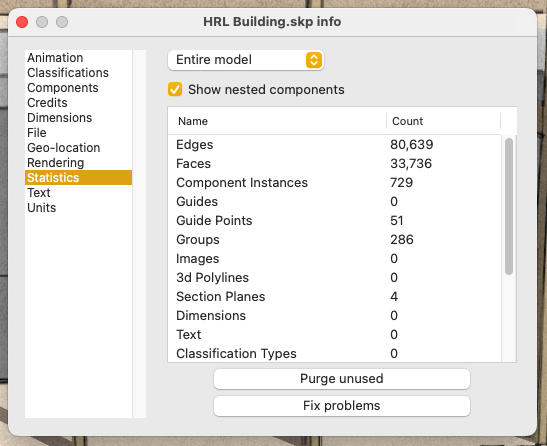 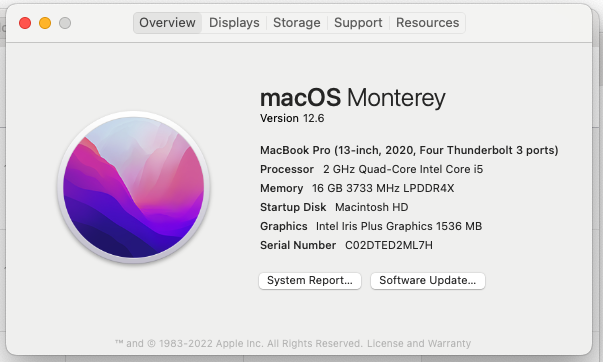 How much are you selecting? Does it do this on a very simple model? Do you get a Bug Splat report to send in?

Does not matter how much I select. Model is cumbersome, see stats above. Have sent in numerous splat reports and and reported to tech support.
Yesterday I started a new subscription, if that matters.

Does not matter how much I select.

So it crashes even in a model with just a square drawn?

Model is cumbersome, see stats above.

I noticed that. Perhaps it could be made less cumbersome?

Have sent in numerous splat reports and and reported to tech support.

Perhaps when the Tech Support folks get back to work after the holiday one of them will take a look at your reports and give you an idea of what’s causing the Bug Splats. @colin might look in before that.

Yesterday I started a new subscription, if that matters.

Does that mean you are using SketchUp 2022 instead of 2018 which is what your profile shows? Perhaps you could update your profile.

Thanks for the six detailed bugsplats you have sent in. (Dave, they are indeed 2022 crashes).

Can you let me take a look at that particular file? There is not a general selecting things issue, but we have done some fixes where something in the model is corrupt in some way. I’m hoping I can open the file in a recent internal version, and see if I get a report of things that get fixed.

Have attached model. It is not well organized. Started out with simple request from clients and grew because they liked the modeling. I have not done a purge.

Not much help but I am able to window/box select with no issues on my end. Movement in model is quite smooth as well even with your style applied and shadows.
SU 2021 Pro (at home)
4th gen i7
16 gb ram
GTX 650 Ti
Windows 10 Pro

I’m on macOS Ventura running SketchUp 2022 on a MBP with Radeon graphics. I too have no problem opening your file and don’t crash with any sort of select. I wonder if the issue is with your Intel Iris Plus graphics somehow, perhaps affected by your choice of style?

You said you hadn’t done a purge, so I did one and it removed quite a few unused items. I also found that there are a fair number of edges and faces that have tags applied, a bad practice in SketchUp. But I don’t see why either of those would cause a crash or affect selection box.

I agee with @slbaumgartner wondering about your graphics card. I assume the Intel Iris Plus is still correct in your profile despite the outdated SketchUp and OS versions.

To Steve’s point regarding incorrect tag usage and unused stuff… 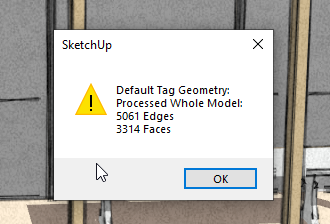 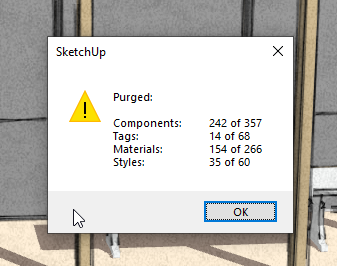 I had no troubles with the file in my latest internal version, but did get a crash when opening the file in the SketchUp you are using. I sent in that bugsplat, and it looks like something went wrong with one of the styles. I won’t be able to ask colleagues about that until Monday.

Might be worth trying that and see if it becomes more stable.

Okay, digesting (literally I guess). What is really unsettling is that my operating system crashes.
I drag select something, the rectangle hangs there for a while and then the screens of the lap top and monitor go black and eventually given the choice of user, and sign in with password box.

• So file functioned okay on Windows but Colin said it crashed in my version (new) of SketchUp
• So the problem is likely in my model, lots of redundancy and bad tag management, maybe style choice.
• Purging is not working the same for me, I click on the button to purge “Entire Model” and I only get a 3k reduction in edges and a 1k reduction in faces. Much less than DaveR got and I did not the the little exclamation windows that showed the results of the purge.
• DaveR, thanks for posting your purged version of my model. I think I will download it and see what happens.
Also, is there a tutorial on reference on correct use of tags, what to avoid?
Thanks very much for help here.

So what happened with DaveR’s purged version? Opened up one of pages with ‘scribble on Masonite’ style, drew a selection rectangle and my system froze up. I could not call up Force Quit from the keyboard. When I did, every thing went black and was given a sign in window.

Proceeded to open back the purged model and found that, on other scenes I could drag select.
Now going through all my scenes and changing all the odd ones back to a default style…
Well, that did it, back on track.

I need to find info on tag usage methods and find out more about purging the model.

Is there a style with sketchy edges used?
Try to rename that style or delete it.

I did not the the little exclamation windows that showed the results of the purge.

Dave used extensions to do the purge and the tag usage corrections (most likely TIG’s from SketchUcation) in part because they provide those after-action reports which the built-in alternatives do not.