Can’t copy this group into another model - missing parts

I’m trying to copy this one bench in a model into another model, and it’s not picking up the whole thing… any ideas?

The bench file you uploaded isn’t the one in the video, I don’t think.
But it has bad tagging in it, you have tagged the geometry not the group/component in some cases.

You’re so fast, ha. The correct bench file was edited in. I’ll go fix the tagging, this is an older model from when I was ill-behaved.

Possibly the file you are copying into already has a component with the same name that has the seat part missing. Copying and pasting won’t overwrite existing component definitions.

Deleting the bad tags and creating a new component with “2” at the end of the name has worked. Thank you both! 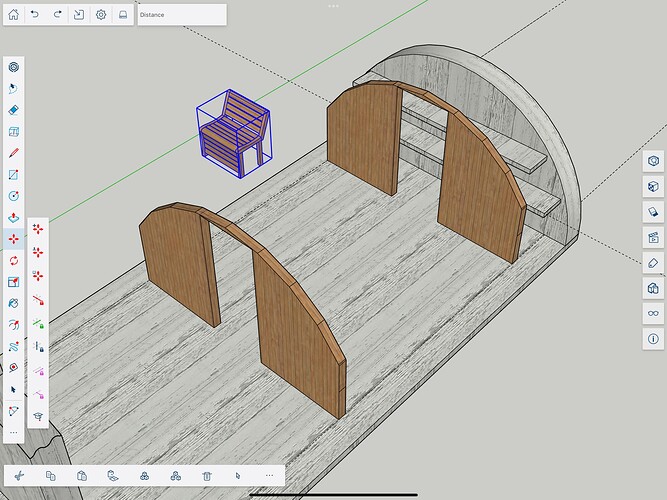 Regardless of what bad tagging there may have been, it was because Benches Swedish tag was hidden in the destination model.

That is to say, when pasting SketchUp will attempt to put the incoming tagged objects into existing tags of the same name.

Honestly, I just attacked it with force. …. So I’m not sure.

I went into the benches model, deleted ALL tags, sending everything back to untagged, then I exploded back down to base geometry and regrouped the whole thing. Made a component of that and changed the name to “single bench 2” when it whined that there was already a “single bench” component.

BUT! Your gif there shows that I could have just turned the bench tag on in the sauna model to see it? Which is a fascinating case of ill-behaved modeler! The client is returning to the original bench design, so I went and grabbed them from another file, which had originally been copied out of the the very first sauna model (about 4 renditions ago) … but this sauna model is retaining component info from that one, and then benches were in that somewhere and tagged as ‘bench’ which… ■■■■. Should have just started over. HA!

it was because Benches Swedish tag was hidden in the destination model.

This is fascinating, because (and I’m agreeing that it is user error) the “Swedish Benches” are a totally different set of original geometry, totally different bench. But SketchUp is trying to organize my copy/paste for me?

Edit: nope. I see it. I had a migrated tag in the new bench file. That’s totally on me.

I had this same issue once, and took me ages (or bit less) to figur out i turned off a tag, so that was the first thing i checked.
I’ts like “Colombus Egg”, sometimes the solution is so simple you miss it over and over again.
Anywho good you could fix it one way or another

I’ts like “Colombus Egg”, sometimes the solution is so simple you miss it over and over again.

I’d never heard that expression before and had to look it up. I’ll use that on my kids some day.
Bob

And for those who still need/want to look it up:
“Columbus once challenged critics to make an egg stand on its tip. After they gave up, Columbus did it himself by tapping the egg on the table to flatten its tip.”