pillar and cap.skp (6.6 MB)
HI, I have two rectangles I need to align. Basically one is a stone pillar and I am trying to sit a pier cap on top which is slightly bigger in both length and width. I’m trying to position it on top so the overhang is equal around the pillar. I can obviously look at the side of the pillar and centre the cap left - right but then if I try to centre forward-back it snaps against the object so I can only centre one side. I’m a beginner so any help would be appreciated as I have a few pillars to do.

You can use the various inference points to put the two together.
Here I have used Alt to cycle through the various points until I am able to select the bottom middle point, then I inference the mid points of two edges to get the centre.

I’m not sure what key alt is on Mac but it should tell you in the bottom status bar.

Thank you that’s really helpful. I have managed to cycle through the various points (it’s the command key on Mac). Whilst I can drag over to the pillar and select the first mid-point, then the second, it doesn’t retain them both like your video, so it then doesn’t snap to the centre. Any suggestions please on how to retain the two mid-points?

How about sharing your .skp file so we can see what you have set up?

I’m not sure what key alt is on Mac but it should tell you in the bottom status bar.

On Mac the command key does this cycling of inference points, though more often option is the equivalent of Windows’ alt key.

Is the cap really supposed to be slightly beveled?

With your pillar and cap turned as they are, use midpoints on the cap to align to midpoints on the pillar. For the second Move operation I got the magenta Parallel to Edge inference and then hit the Down arrow key to lock it.

This kind of thing would be easier ifyour pillar and cap were aligned with the model axes.

Personally, if I had to model that and had to put the cap on the pillar like that, I would model the cap in place on top of the pillar. Less screwing around with moving components about.

I would normally do that all with keyboard shortcuts. One could use scaling to make the cap larger, too.

A little off-topic but things to know about. First, it’s generally best if you turn off Length Snapping in Units. This can create imprecision in your models. 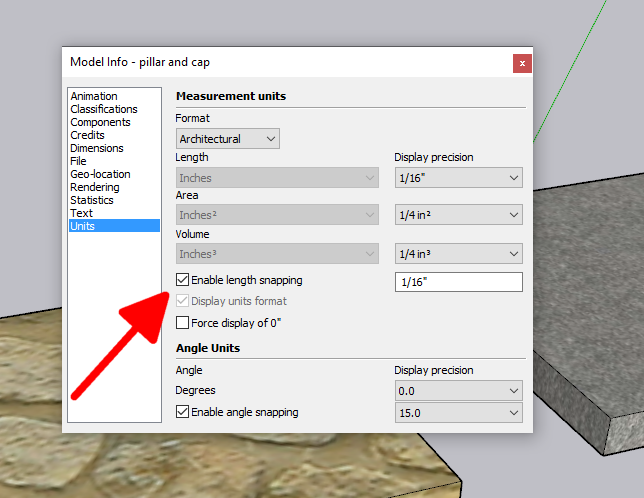 Second, make sure you keep all edges and faces untagged. Only groups and components should get tagged. The geometry in your cap component has the Water Feature tag. This can create headaches for you as you go along.

I appreciate you going through that. The cap isn’t meant to be beveled

I’ll have a proper look at what you have said later and work through some of the stuff mentioned.
When you say the model axes, the model is of my house, so whilst the house uses the axes this particular pillar is on an angle from the house, I presume then the pillar can’t follow the model axes.
Yes, would make sense to model the cap on top of the pillar and I can see that being easier. When I started building the model I just broke it down and tried to design a cap as a component.
Thanks for the other pointers I think I’ve just let the model get untidy but will bear this in mind for any future projects. I was forced to learn sketchup as a garden designer we used let me down and we had contractors starting so I decided to model our garden make-over project - many a late night! It’s since proved worth learning though.

The cap isn’t meant to be beveled

Evidently the geometry was distorted while you were messing around with it. I redrew it before moving it into place in my first example.

so whilst the house uses the axes this particular pillar is on an angle from the house, I presume then the pillar can’t follow the model axes.

You could model the pillar and cap aligned to the model axes and rotate them afterward. It’s also possible to rotate the model axes temporarily which could help although you have to be careful with that.

When I started building the model I just broke it down and tried to design a cap as a component.

I used your pillar component in my second gif and created a cap component on top of it. That’s the way I do most of my modeling. Reduces the chances of errors and there’s less data entry required.

Thanks Dave, I’ll work through these.