Finally had time. First try. Needs a few things but I’ll work on them later. 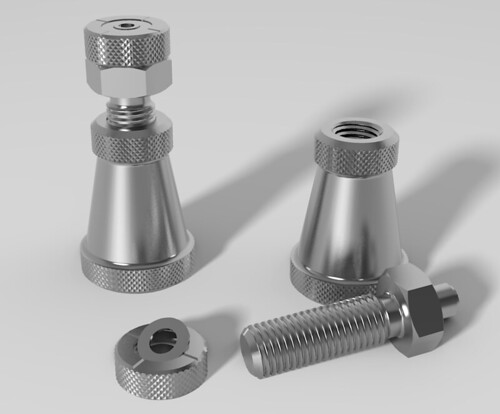 Sweet. Can you add some dents and scratches, and maybe a smear of grease, to make it look more authentic?

Thanks. I’ll see what I can do.

For a biomechanic, it’s probably as dirty as it gets?

Yes.Tools have to be taken care of and kept clean.

Tools have to be taken care of and kept clean.

For a biomechanic, it’s probably as dirty as it gets?

For many of their tools, veterinarians face a tough choice: Order a medical tool from a specialist supplier or go to the local hardware store and buy an essentially identical item with a fifth of the price.

The person who’s toolset I have seen wouldn’t, I think, use one to treat cows either…

Hi DaveR
How did you draw the threads? Did you use a “thread” plugin or do you make them with basic Sketchup tools?

The only extensions I’ve seen for drawing threads don’t do a very good job. I used a combination of native tools and some more generic extensions. Three key ones are Curve Maker, Eneroth Upright Extruder, and Eneroth Auto-Weld. I looked up the specs for each thread I drew so I could get the dimensions right.

Thanks.
Regarding the specs of the thread, did you draw a metric ISO thread or a Whitworth thread?
I ask, since for ISO threads, the outer side of the thread on the screw is chopped less than the inner side (see orange circles in below picture, which I just googled now). With a Whitworth thread the inner and outer side is “chopped” by the same amount.

In your drawing I have the impression that the outer side of the thread is “chopped” more than the inner side. Is this on purpose and there are different definitions for these threads?

Good eye. I did inadvertently draw the thread on the jack incorrectly using P/4 instead of P/8. By the time I caught it, the render was nearly finished and so I decided to leave it. It would be trivial to fix the model but I’ve moved on.