Hi All,
Can someone direct me to a good tutorial series for the following?:
Let’s say I’m modeling a simple one story house with a walkout below with the house placed into a hillside.
I started the sandbox tools pretty thoroughly and I’m familiar with the TIN and Hidden geometry aspects, not to mention sketch up nuances
with respect to how it doesn’t work i.e. flip edges etc.
I know how to import geoterrainn and slice it into topo layers/lines ( if that makes sense as a working methodology)
I understand the stamp tool smoove tool and how to land or hover something onto existing terrain.
I think I would be able to import surveyors I don’t care either to do you were 3-D and work from that if I needed to.
My problem is that I am pretty old-school i.e. accustomed to sitting down with trace over topo lines with a building footprint and sketching and reconnecting topo lines or deadending them into objects as necessary or retaining walls or whatever.
I just don’t see a sketch up a Quillivant to this process.
All the sketchup tools and methodology that I see don’t have a parallel to this process maybe I just need to change my thinking but so far after watching probably 10 tutorials I cant seem to find someone who gets to the point of a here’s how are you meld a new building into an existing landscape and have it looking and making sense.
Thanks to anyone Who can point me in the right direction.

If I understand correctly, you just want to put a hole in your terrain to fit your building?

Doesn’t ‘Intersect Faces With …’ do the job for you?

Yes that’s part of it but no not really I want to understand how to manipulate contours with ease in a micro versus macro sort of way and not just the add detail sandbox command.

OK To better illustrate my point see attached picture of an AutoCAD drawing which typifies a site plan for me.
This was done using an AutoCAD (2D I think) survey imported as the background.
My question is can I use sketch up to insert my model into a site plan like this and be able to manipulate and study the contours and eventually smooth them out to look like real terrain? Ie what is the workflow?
I typically work in 1 foot or 6 inch topo increments do I create this giant layer Cake of contours and use the push pull tool to move them around and create new contours with curvy lines as contour edges? how you do it and then have it remain Easily editable? 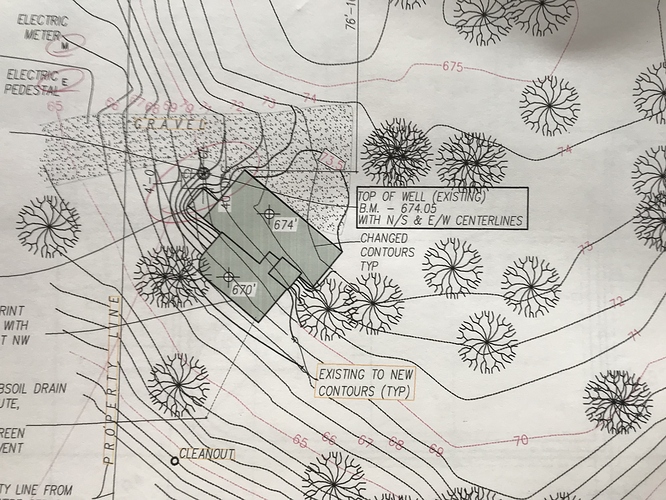 I would use Toposhaper with the traced contour lines.

… how you do it and then have it remain Easily editable?

they are editable like how you would move edges, faces or vertices. Or at best you may scale one or two curved contour lines or move them up or down. But that’s probably not what you are after. You don’t want to manipulate the terrain, do you?

If you do have the contours as welded segments → to curves in SketchUp, you can apply ‘From Contours’ from the ‘Sandbox’ tool set on a selection of contour lines. That would get you the skinned terrain surface. You’ll need to clean up the result by removing unwanted edges though.

Thanks, I’ll check it out.

Good tips. I am also familiar with some extension plug in that
“welds” line segments into one continuous line.

point, not just landing (stamp) a building on it.

but using the push/pull tool to alter grades seems overly basic. Just
as you can offset lines but you can’t grab sections of line section
and move the vertice and end up with a smooth (topo) line can you? and
what do you do with the vertical face between topo elevations? I’ve
seen vids where you have to arduously have to go thru and delete all
the “bottom” lines and then use sanbox tools to reconnect the parallel
topo top lines. Again seems amateurish.

Or at best you may scale one or two curved contour lines or move them
up or down. But that’s probably not what you are after. You don’t
want to manipulate the terrain, do you?

SketchUp, you can apply ‘From Contours’ from the ‘Sandbox’
tool set on a selection of contour lines. That would get you the
skinned terrain surface. You’ll need to clean up the result by
removing unwanted edges though.

Ok, I’ve looked at that a bit and it seems to have potential. (would
be nice to find a vid with SPOKEN WORDS!), but…

I would like to use. That being draw and manipulate all the contour
lines in 2D plan (with them actually being 2D, ie all at the same
elevation) or via using Sketchup Standard Top view from above in which
the topo lines could be at varying elevations say from a Geolocate
Terrain import.

plan only and then jump to 3D. Can Toposhaper do that?

group and building (and other hard surface lines as well) are in
another separate group so the geometry doesn’t stick to each other,
and/or topo is on its own layer and it all works to revise and relook
at?

via using Sketchup Standard Top view from above in which

the topo lines could be at varying elevations

I was thinking along those lines: create a working plane, elevate it to match the elevation of any contour, and then just draw the new, changed contour line. The surface could have transparency so you can see everything below, but you’d have to keep changing the height of the plane for each contour line. It would allow your brain to think in terms of contour lines which is how I learned it all.

My limited experience has always been, asking the surveyor for a dwg file and importing the contours, which SU easily converts to terrain. I never erase or edit the existing condition, only move what’s changed to another layer I can turn off to hide. As with existing building renovations, we always want to document what’s Existing, Removed, and New.

You ask for tutorial then Look Winning for SketchUp (1,2) and Daniel Tal (8) You Tube videos on my playlist

This link is related to Daniel Teal video: Learning to model terrain in SketchUp

Also Nick Sonder in his book SkechUp & Layou for Architecture describe the workflow you named old school methodology in one of his project, but I think it is covered by all the above links.

Good tips, thanks a lot!

Thanks all. “Terrain Modeling in SketchUp” by Daniel Tal Land F/X answers my initial questions most precisely. Will check the other vids as well.

i’m glad that it works for you. I’ve updated my playlist, it’s worth if you can check it.

John Brock of Brock Works Inc did a very good series of tutorials on placing a walk out basement in a SU contour model. here is the first one.

Thanks I’ll check it out.