I am used to using Sketchup 2015 without difficulty. Once I name a component I, it shows up in the component window but it is uneditable. Why?

How are you trying to edit it?

Are you ‘double clicking’ on it so as to open it up in it’s edit mode?..

or are you right clicking on it and choosing the ‘Edit Component’ option?

…and neither one of these are working?

If so, you should probably post up the file so folks can take a look.

…that is you don’t edit the basic geometry of the component from within the component window… you can of course edit it’s name, and description, in the text fields.

Thanks very much for your reply. I have tried both methods and the dialogue box that pops up when I select the component using either the double click or select method doesn’t provide an “edit component” choice but instead shows “make component” even though I have already made the object a component.

I have attached a sample file that shows the problem.

Thanks for any help you can provide.

your example file does not contain a component. It only contains loose geometry. that is edges and faces. 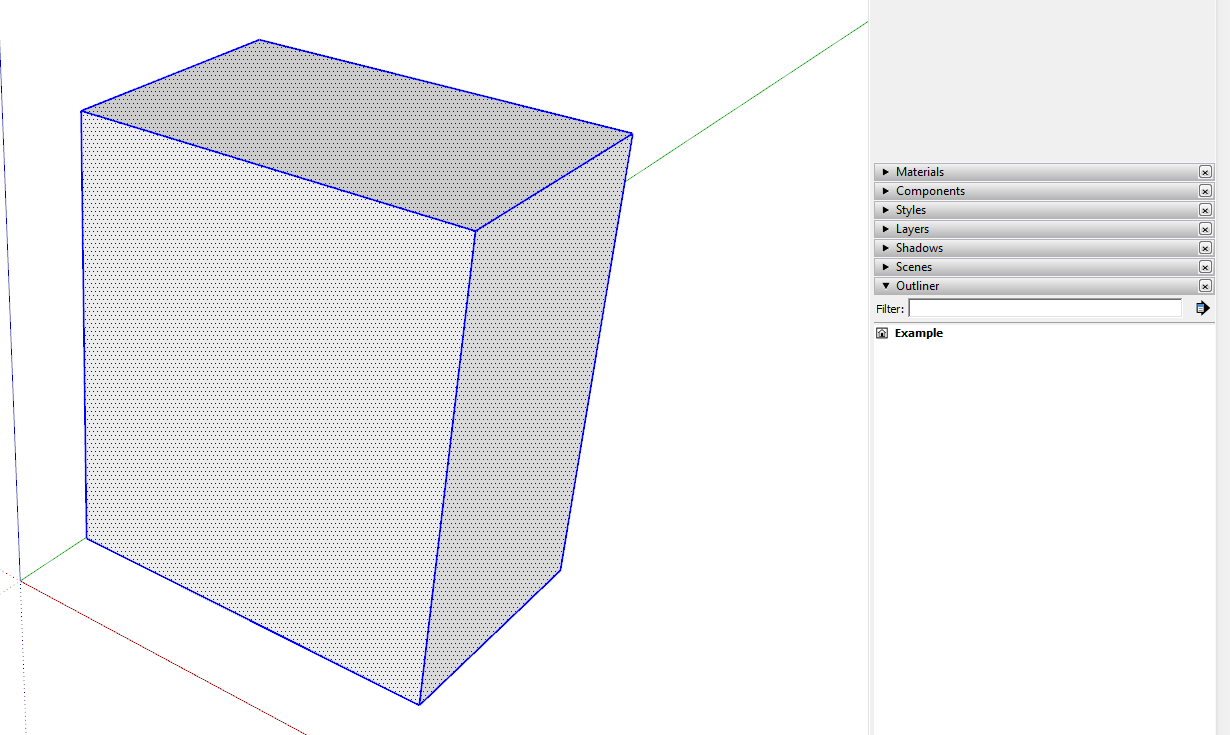 1230×735 21.4 KB
After creating a component you should see something like the following. 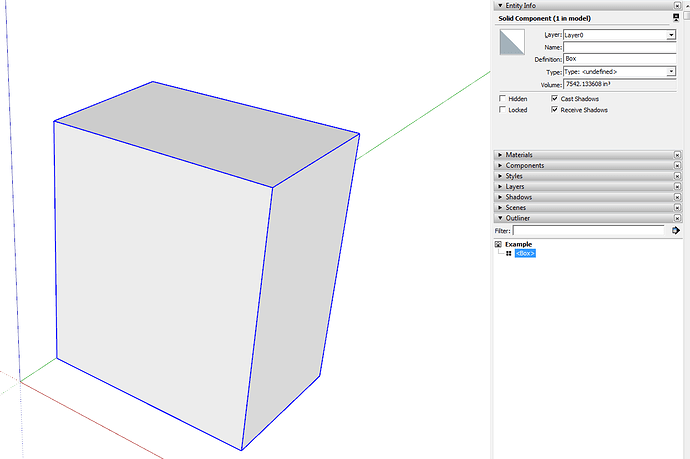 Not the Entity Info window shows a component is selected as does the Outliner.

Is it possible you aren’t selecting the edges and faces to make the component or perhaps you are canceling the creation of the component?

Thank you very much. I did not understand what the Replace Box was (and I still don’t) but I know that it works. I very much appreciate your help. I spent a lot of time trying to figure this out.

The Replace Box is letting you decide if you want to swap out the original model—that geometry that you used to create the component in the first place—and instead ‘replace it’ with an instance of the component you just made.

You have an object that you like, and you’ve decided you’d like to make a component from it.

OR, you can replace it, and it then becomes an instance of the component itself (replace box = checked).

Components are special in that they are a ‘definition’ of an object you want to have in your model.

When you bring a component into the drawing, that copy of the component is referred to as an ‘instance’ of that component.

If you you have 10 copies of a component then you’d also have 10 instances of it.

Since it’s not covered and for completeness, you may ask “why would it give this option?”

if you need to make a variety of similar components, this become very useful…

Thank you very much. There is so much to learn. The terrific flexibility of Sketchup also means an entire vocabulary to learn in addition to the functions. Can be a bit overwhelming for a simple woodworker.

Got it. Thank you! This also helps me understand how to duplicate an object without including it in the component. Simple, really, but not entirely intuitive.

Several times I have inadvertently altered a component thinking that it was a group, only to find out an hour later that I have unwanted changes all over the place: why doesn’t SketchUp show components and groups as a different colour when selected?? I suggest components dark red or magenta (as per locked items in Layout) and groups and unique components remain blue.

why doesn’t SketchUp show components and groups as a different colour when selected??

That has been suggested before. Maybe in SU2017.

I have a different strategy that works for me but I can see that for some, different colored selection boxes would be good.

Wink, wink, nudge, nudge: Dave’s strategy is to use only Components

This idea can be expanded upon, and if it makes it into the development phase, I think that it should be.

Rather than force a single color upon folks, let them adjust their own colors with UI color preference settings.

There is a plugin that flags components, and shows you all the components that will be affected by your edit.
Edit Flag

Got it. Thanks for the explanation and the little example.

Thanks. Do you know what the plugin is called? I assume I can download it from the Extension Warehouse, right?

Thanks. Do you know what the plugin is called? I assume I can download it from the Extension Warehouse, right?

It’s called Edit Flag. The link to it is at the end of Box’s post. Click on the words ‘Edit Flag’ in his post. It isn’t available in the Extension Warehouse. It is from Sketchucation, though.