Ok, in the gif below, you will see that i am trying to remove the inside sections of the ring without messing with the out side geometry. but i cant get it to work properly. I want to be able to do it BOTH with solid tools and native. but lets try native first haha

Upload the .skp file so we may be able to better assist.

Sometimes the intersections simply don’t apply where the edges of the components are close but don’t quite line up and a gap is left. I just zoom in and make sure the edges / lines are joined up when there is not much to look for on a simple model like this.

Seems like an unusual approach to modeling that. I think it would be easier to model it without bothering with Union or Outer Shell.

yes, it is a very unusual way to model this. I made it early this morning in about 5 minutes with just push/pull and what not. very easy. then someone asked me to do it this way… proof of concept. I told said person that its way more complicated using the above approach haha.

I started with the large disk with the hole in the center, extruded it to thickness, add the geometry for the rest on top of that and used Push/Pull to finish it up. Solid from the git go. No special tools required. I used The Circle tool, Arc, Push/Pull and the Eraser. 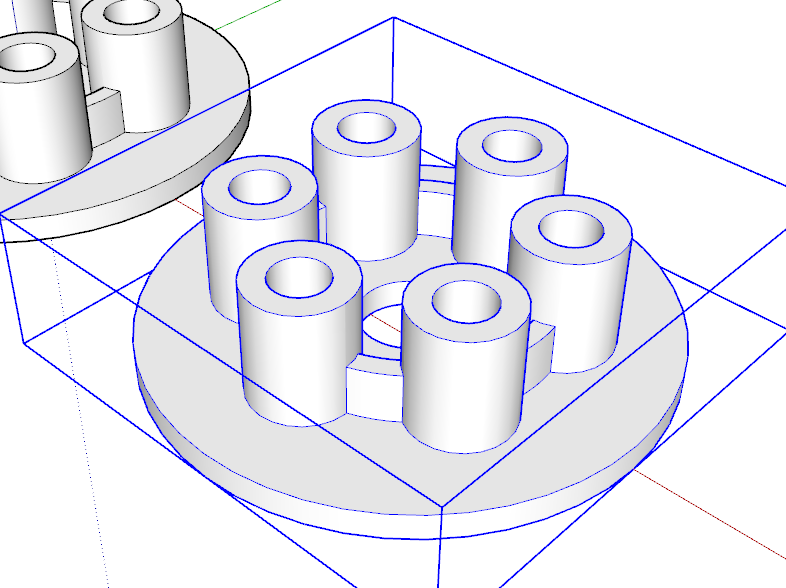 Thats the exact same way i did it this morning:)

Im just trying it the other way as someone had asked me to. they wanted to see another route to get to the same place haha.

the student is realizing that the second way is painful haha. However, im curious now because thats just me.

ill keep toying with it. Ill scale it up and see if i can get it to work on a larger scale factor

Granted its more work than the other way but it nice to see it done this way as well. Shows how versatile SU is and how important it is to know the most efficient way to sketch.

The DaveR method is what I would employ - probably would not have thought of anything else!

I vote for Dave’s method if it is what I think it is. That is, I would draw the 2d plan representation of the center assembly, and first eliminate the extra edges before extruding. And it just about warrants doing one part and radial duplicating, though the concentric circle setup is helpful in layout.

FWIW, here’s an illustration of what I described earlier.

Thats the exact same way i did it yesterday morning before attempting the other way haha.

Made the base plate 3d, then sketched the other profile on top of the ring and bosses, then extruded them to the heights needed:)

I was just trying to show students an example of intersecting faces with model, context, and selection to show that it could be done that way, even if it was more complicated.