The Photo doesn't really get matched 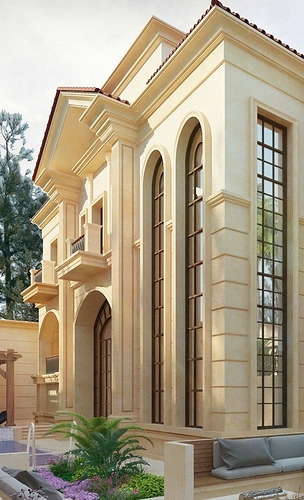 At the end my vertical lines wouldn’t get alligned… could anyone help me plz?
Thanks a lot in …

That image has been manipulated to make the vertical lines run parallel in the photo instead of running off to a vanishing point as they normally would. SketchUp requires images that are straight out of the camera for Match Photo to work. That means no perspective correction as in your image and no cropping. Can you get another photo of the building that hasn’t had any perspective correction?

My first thought too. But if you hold the camera horizontal (perpendicular to all vertical lines in a building), how would the image look like? Vertical lines parallel.

If you held the camera so it is parallel to the verticals on the building, the center of the image would be much lower than the center of the photo. That would mean you’d get a different photo or the photo has been cropped which is also a problem. It could have been shot with a tilt lens or with a view camera with tilting lens and film standards but that would be adding perspective correction. Most likely in this image the perspective correction was done in post.

It could also be a render.

Result is a one point perspective representation

OP’s image could very well be without any manipulation (except maybe cutting off the lower part? that is not needed)

(except maybe cutting off the lower part?

No matter what, some sort of manipulation was done to the photo that makes it not suitable for Match Photo.

No matter what, some sort of manipulation was done to the photo that makes it not suitable for Match Photo.

Yeah, but it wasn’t the sissors.

It could also be a render.

+1. Look at the plants and the water. And an extreme wideangle photo would be totally sharp, no DOF blur.

Thank you very much for your explanations, yes most probably you are true as i guess too … but i was not assure if the picture has been manipulated or not or is there any other way to get most matching result for this picture…
Unfortunately i couldn’t take another photo from building (cause i’ve got it from web/another person !) 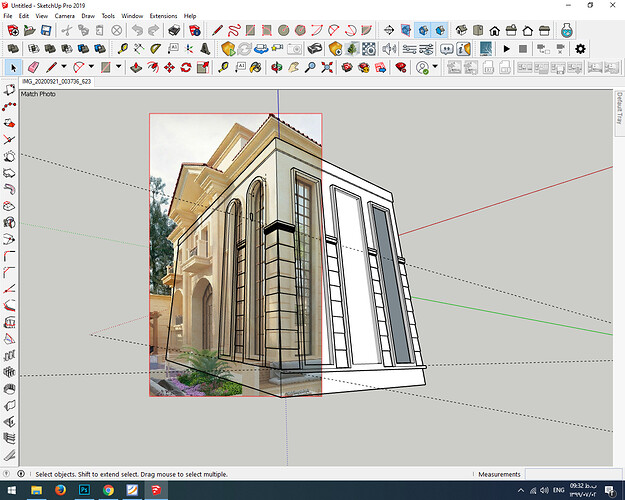 Thank you very much …

Comparing the image to what you were able to model, it should be clear that there’s been some manipulation of the image. I think it it were my job to model that building I would not use Match Photo at all. I would probably insert the image and stand it up in the background to use as a reference but then I would model from scratch.

Yes, the image clearly has had “perspective correction” done on it. The only way to get vertical lines of a building to end up vertical without converging without using perspective correction either with lens shifts in camera or by software is to hold the camera dead level in which case the horizon line cuts the picture exactly in half vertically. You can tell with this picture, the horizon line is not half way up the image. That means it is either distorted or cropped.

You could try in Photoshop expanding the canvas area downward with blank space so that the horizon does land at the half way point, and that might work for Match Photo, but it’s hard to say if it’s been stretched dimensionally as well.

It is definitely a render. Look at the PNG transparency artifacts in the tree and building outline (200%crop) 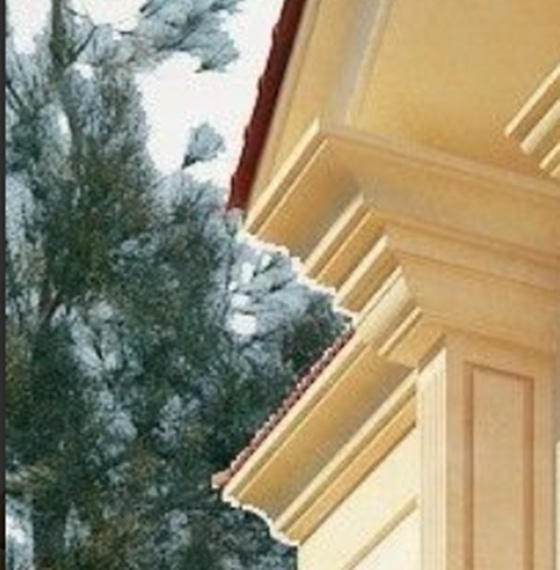 It is definitely a render.

I think it’s a poorly placed picture in another picture (snowy trees instead of heaven). But this indicates that it is not the original photo image, but has been manipulated, just do not know how much. As a photographer and photoshopper, I can say that perspective is often corrected in architectural images. Not only correcting the parallelism of the lines, but also compensating for the bulge caused by a wide-angle lens from a close distance. Unfortunately, these techniques are not mathematically accurate and are intended to achieve a good visual effect and not for use in precise constructions.

I checked the image with CorelDRAW. 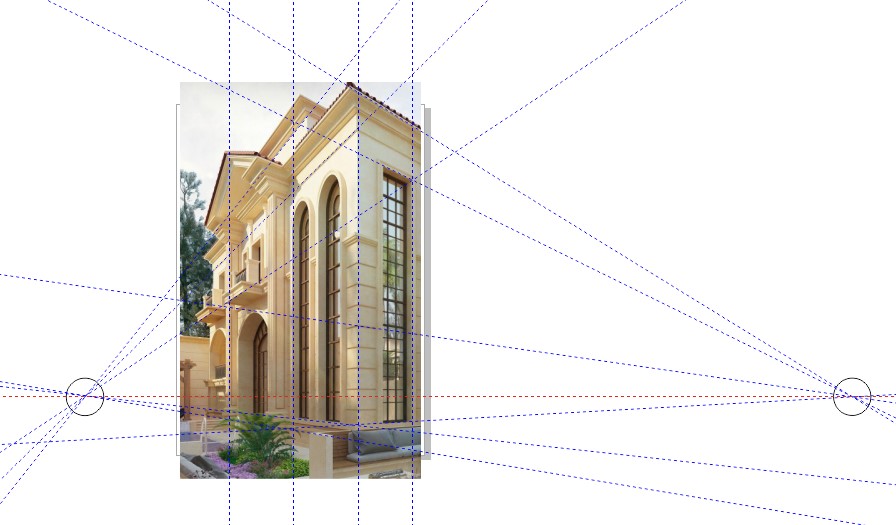 Corel896×525 82.3 KB
All horizontal lines are in the correct perspective and the vanishing points even lie on one horizontal. However, the verticals are completely parallel. Such an image cannot be obtained without image post-processing. I tried to fix it. 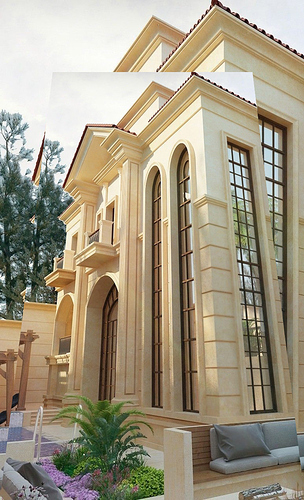 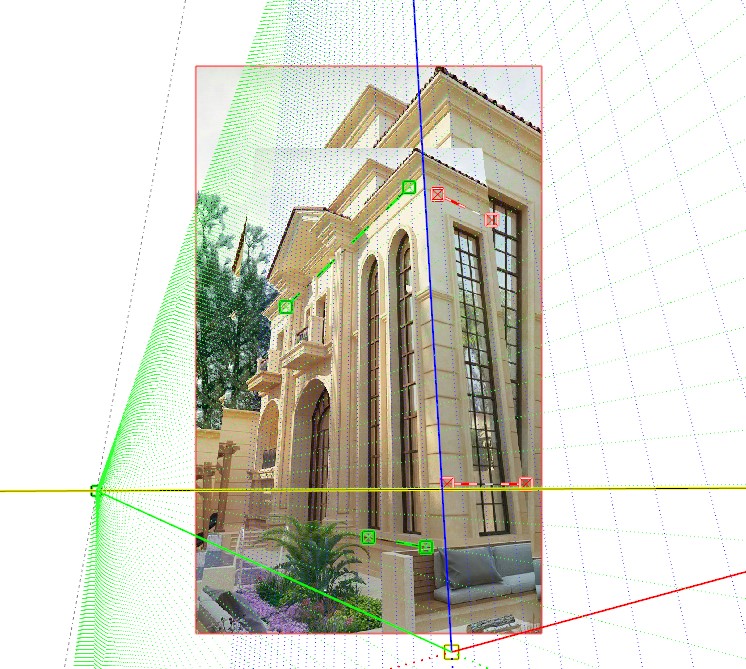 The result can be seen below and also in the attached file. Not ideal, but enough to use. 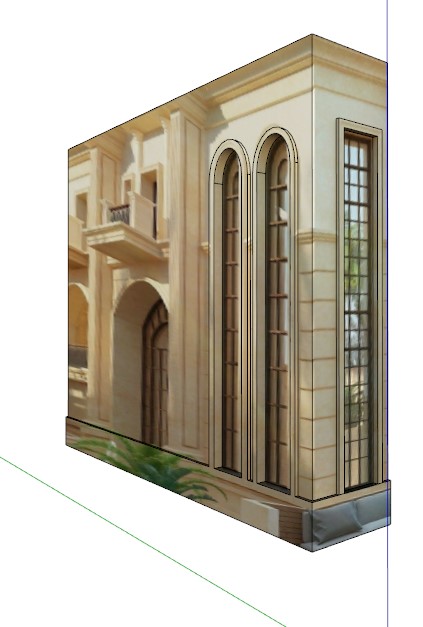 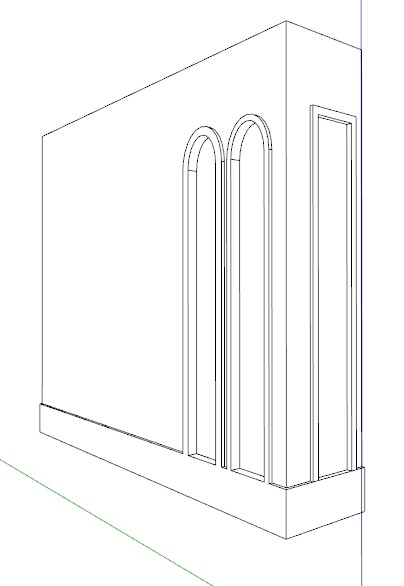 Hi dear @kamambers ,
Great explanations and great try to fix that photo… thank you very much for your Solution!!!