Scene's layers and the selected layer visible, not wanted. Is this changed?

I notice, since I upgraded to 2018 this week, that when I create scene with some (un)selected layers that after updating the scene, save them. Then switch to another scene and back, that the currently selected layer is also visible. In the past I didn’t have this problem. What is changed? If I remember correctly the selected layers did kind of switch with it. I did create a small sample skp and if you look to the preview there you can see how it did look when I did update and save the scene. For now I did add an empty layer and do select that layer. But it looks silly that I have to select that layer before I can switch a scene. Am I wrong or… 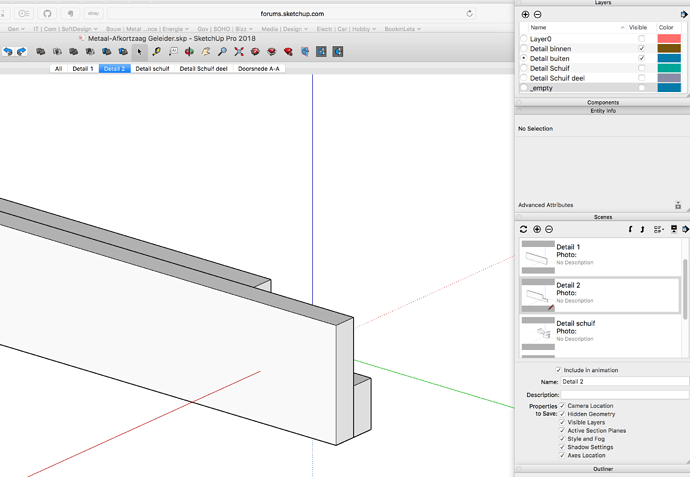 I see two issues. First, you should be leaving Layer 0 active (selected) at all times. Do not select other layers. Follow the rules and leave ALL edges and faces on Layer 0. Only groups and components get assigned to other layers. The faces and edges in the groups/components remain on Layer 0.

Thats quick, thank you.
However, I did do that, all the objects are groups. But some I did draw inside a group.

I was so focused on the selected layer and the issue, that I forgot to check the layer0.

But some I did draw inside a group.

Even when you are drawing inside a group, you should be working with Layer 0 active.

Glad it is solved.