Save multiple axes orientations and toggle between

I often have several working areas in a single design each populated with various objects or architecture and all at different angles from each other. In order to move objects around at 90˚ or 180˚ relative to each other I am constantly resetting the axis orientations to orient on different areas. I know I can set up orientations within distinct groups and sometime do but I often trade objects quickly from area to area and wish to quickly relate to different axes on the fly. I get the saved scene different axes trick, but it’s clunky and leads to hidden/unhidden object confusion for me.

The ability to set and save say even 3 or 4 axis orientations for any given file, and toggle quickly between them would save me time. Could be a tool bar but a keyboard shortcut would rule. Thanks.

[quote=“endlessfix, post:1, topic:32273”]
The ability to set and save say even 3 or 4 axis orientations for any given file, and toggle quickly between them would save me time.
[/quote] That’s what the saved scenes would do for you. But only save the axes orientations per scene, nothing else.
Also, saving some geometry to clipboard and placing in a changed environment (other scene with other axes) will respect the new environment. Pretty much what you ask.

Hey thanks for your suggestion. Yes, I understand that workaround but its got some serious side effects. One: you have to wait for the scenes to re-orient to its last saved view so if you are zoomed in to a small area of a large file and want to change axes for a second to move a small object relative to some other thing out of your view you must change scenes then go hunting around to get back to the object you were trying to move, and if you are 6 layers deep inside a nested component then forget about it. Two: If one is using layers also as a tool to hide an show various aspects of a build (as I am and please let’s not get into the outliner vs layers convo, both are useful) Then one needs to keep updating 3 or 4 versions of each working scene each with different axes? So if I have 5 scenes I’m outputting into a video I need 15 scenes to work on it? An “a axis” “b axis” and “c axis” of each one? Too much. Three it’s not quite what I need to copy paste, but that’s a good workaround too, I want to move the same object easily 2’ 90˚ relative to an object I know exists elsewhere in my geometry but cannot currently see, then 4" 90˚ z axis relative to a completely different tilted object somewhere else.

A simple ability to save and recall axes would solve all this quickly and neatly.

In order to move objects around at 90˚ or 180˚ relative to each other I am constantly resetting the axis orientations to orient on different areas.

Inferencing and inference locking does not constrain move operations solely to current axes orientation.
You can just as easily encourage and lock an inference to existing off axes geometry.

• Preselect the geometry you wish to move.
• Activate the Move tool.
• Hover the Move cursor over any edge in the model that’s oriented in the desired move direction.
• Press and hold Shift when the ‘On Edge’ inference message appears.
• The move is now constrained to the direction of the inferred edge.
• And you’re free to place the Move tool as needed for the first click of the move operation.

The ability to set and save say even 3 or 4 axis orientations for any given file, and toggle quickly between them would save me time.

I understand that workaround but its got some serious side effects.
One:
You have to wait for the scenes to re-orient to its last saved view…

If the camera moves when you hit a Scene tab that is intended to change only the Axes…
Then the Scene wasn’t setup properly.

Set the Scene to save only the Axes Location and then update the Scene. 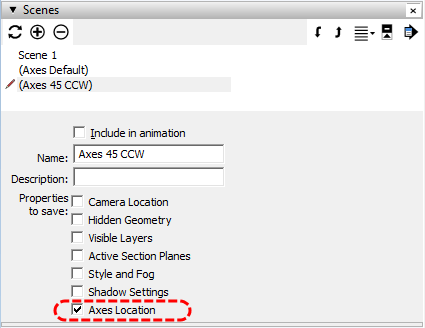 Thanks to both of you for the great suggestions. Yes inferencing, of course, but I have to be able to see the object I want to infer to which isn’t always convenient. Scenes restricted to only axes changes is a great option, Thanks!

I could still use a keyboard shortcut to jump between preset axes. As a “future feature request”
Maybe I could set up a shortcut to toggle between scenes, but only some of them.

nice, now we’re talking. Thanks to everyone for the knowledge.

Oh, except appears to be for Windows only, sad face. Thanks for the tip though.