Moving Objects to a Fixed Distance in Layout Essentials course

Hi- this seems like it would be pretty basic and obvious but for some reason I’m struggling.

I’ve taken the “SketchUp Fundamentals” course to get a basic understanding of it and now I’m taking the “LayOut Essentials” course from the SketchUp Campus.

I’m following along in the video and I’m trying to move the square to the right by 2" along the red axis. I’ve selected the square and begin moving it to the right slightly (just like in the video) and type in: 2". Unfortunately, the box on the bottom right corner keeps saying “Invalid String”. The box never changes to say “Measurements” though when I start typing 2".

I attached a screenshot for reference. Thank you! 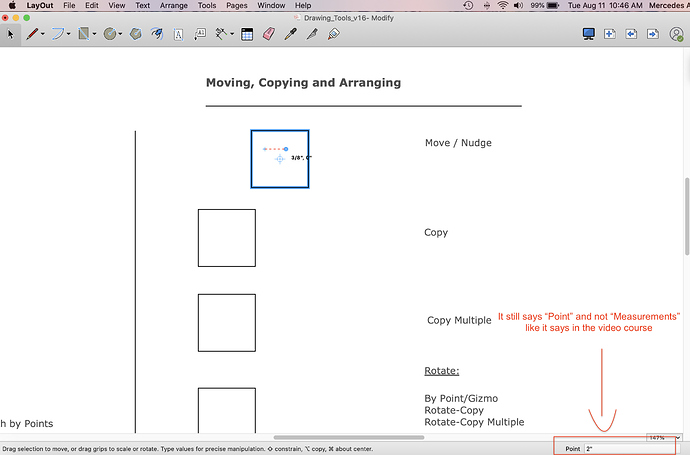 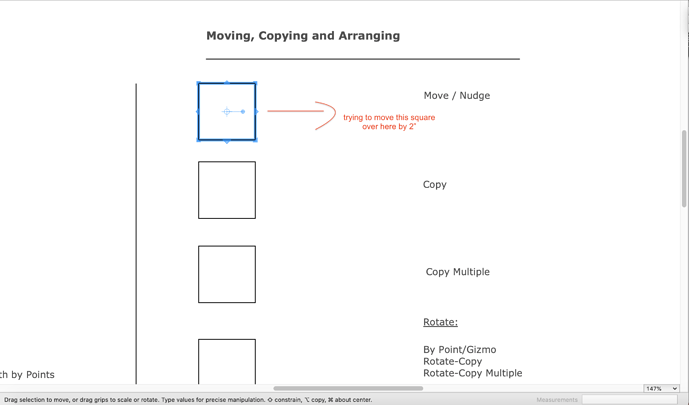 Here is another screenshot I took of the actual course video. In the bottom corner it says “Measurements” when he enters 2.

I think that might be the issue with me not being able to move it to the right 2". 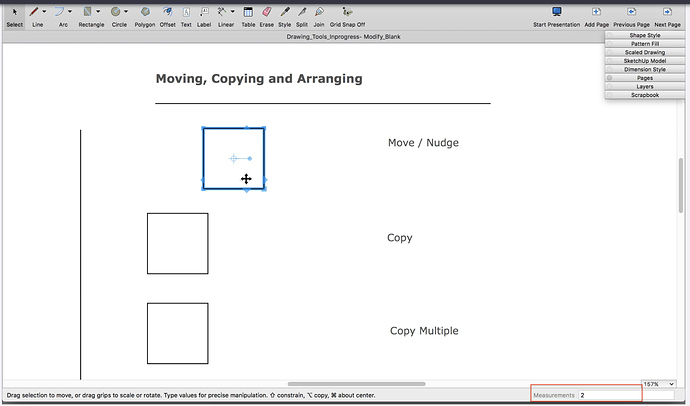 I also cannot copy multiple squares by typing in “x3” for three copies of the square. It says the same thing “Invalid String”.

Are you typing the quote mark when you enter the distance? Are you clicking after moving the rectangle?

I tried it both with and without the quotation mark. I was practicing again and somehow did it by accident but now I can’t do it again.

I’m not clicking after moving the rectangle.

If the Units in Document Setup are set to Inches, you don’t need to enter the quotes at all.

Make sure smart quotes are turned off on macOS. They cause open and close quote characters instead of the “dumb” double quote that SketchUp expects.

For anyone chancing across this, I have a new support case with the same symptoms, and in trying to reproduce the problem I was in a mm units LayOut file, moved a new rectangle some amount, typed 10 Return, and got the invalid string error.

I then could not make it happen again. Trying now to figure out what was different the first time, but it certainly isn’t to do with typing the unit symbol, because I didn’t do that.

I was using my trackpad, and it’s hard enough to keep that pressed and type at the same time, that I’m sure I didn’t do the first thing you suggested. It’s not out of the question to accidentally do an extra click as you are trying to just release, but I don’t think I did.

If LayOut missed the release event it could explain it. If you had an input device that was set to tap-to-click, that would increase the chances of an accidental extra click at the end, but my trackpad isn’t set up that way.

I’ll keep trying, there may be another cause that made it happen so much for the OP, and my new support customer case.