How to quickly make a solid surface on stud wall?

I have an existing stud wall. What is a quick way to draw a face on the wall that is unbroken from the inner studs. This would allow me to add a quick exterior surface for the structure.

When I draw a line to close the perimeter and the face is automatically generated, but al the studs are visible through the face. I know that I can build out from the wall to resolve, but is there a quicker way as I have a large number of walls and angles which would make it a very large task.

I have attached a sample. On the left, I have manually deleted the stud lines to get the flat surface - looking for an alternative method. 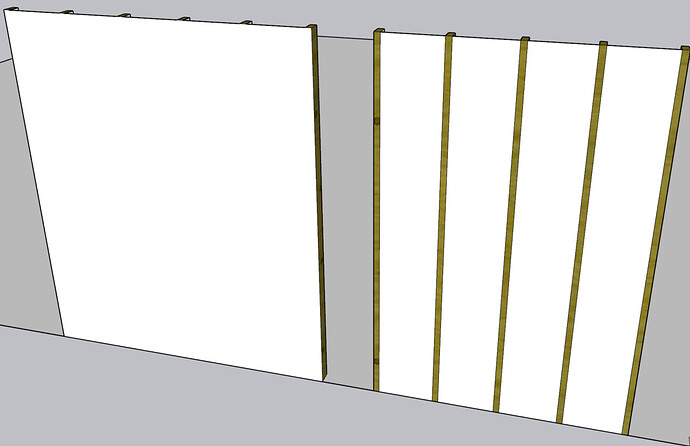 You need to give the wall sheathing some thickness. After you create the rectangle use Push/Pull to add thickness to it. Remember that faces in SketchUp have zero thickness.

Understood, but unfortunately, I would have to still have to pull out every single face for each stud and space between the studs, then delete the lines from pulled stud surfaces.

I have also considered drawing a 1" line out from each corner on in order to create the raised surface. This is a solution, but hoping for a simpler one because I would still have a tremendous amount of work due to all of the angled surface on the roofline, etc.

I would have to still have to pull out every single face for each stud and space between the studs, then delete the lines from pulled stud surfaces.

This implies to me that you have not been making components for the studs.

I would have to still have to pull out every single face for each stud and space between the studs, then delete the lines from pulled stud surfaces.

This suggests to me that the studs are created with loose geometry - edges and faces in the global model context. It would be good to put each stud’s edges and faces into a separate component instance or group. In that case the drywall object’s geometry would not stick to or merge with the stud geometry. The drywall geometry would then be placed into its own component or group context.

He’s a quick example of how to use components and linear array to make a wall.

Those are great tips guys! Unfortunately, not all the studs are components or groups. So, I will need to either convert them or manually draw a furred wall on each and every surface. If only there were a quicker way to draw a face that would not sector off on each stud. Naturally, the best solution would have been to build the array of studs as shown in the vid. Unfortunately, I was not aware of this. Being an AutoCAD convert, I have some learnin’ to do.

Unfortunately, not all the studs are components or groups.

I have some learnin’ to do.

Best thing would be to start over with the framing modeled correctly. Really it’s the same as building the wall in reality. It’s only as good as the stuff at the beginning.

Box, for future reference, I will use this method, but suppose I have a stud wall that runs up to a rafter that is on a pitch. Is there a best practice for trimming each stud at the top where it meets the rafter? Would I use the subtract tool if all objects are solid?

Little late for that due to time constraints unfortunately. Next project will get the works! BTW, I do not do this professionally…these are just my own personal projects.

I think you are missing the point of components.

Little late for that due to time constraints unfortunately.

Well, at least select all of the studs that are loose geometry and make a component or group so the geometry of your wall sheathing doesn’t merge with the stud geometry.

No I’ve got it, but my question was on a wall that would need to meet up with the rafter on the wall adjacent to the wall in your last video. The studs would be dissimilar. In other words, each stud would have a different height. Sorry if I am not explaining well.

I will be able to do that productively in several areas, but not all. It is a good backpedaling solution for me however.

To save back peddling:
If you spend some time at The Learning Center, you will learn how to use the tools to get what you want. (interactive tutorials) Also, go to The SketchUp YouTube Channel and pay attention to the Square One series. Both are sponsored by the SketchUp Crew and well worth the time spent there.

Have a look at this if you’re thinking about demonstrating to a client. It shows how to prevent ‘bleed through’ of studs etc when zooming out.

Thank you all for the great insight and for helping me identify where I started out wrong and suggesting what I might do to resolve my issue in such a late stage. On the next model, I will now know better how to leverage components early on and where useful. Again, thanks to all the experience and resources you have provided.

Since this particular model is in such a late stage, I have determined that my quickest solution is to select ALL framing members in just a couple grabs, make it a group, then build faces outside of that group. This allows me to give the material some thickness without bleed-through. So far, it is working well and I am making each surface as a group or component, respectively.

Thanks again and should anyone else find themselves in such a predicament, maybe my solution will help or one of the solutions above.

Or you could start the group/component before drawing the skin.

In progress. I have about 3 hours into this one so far… 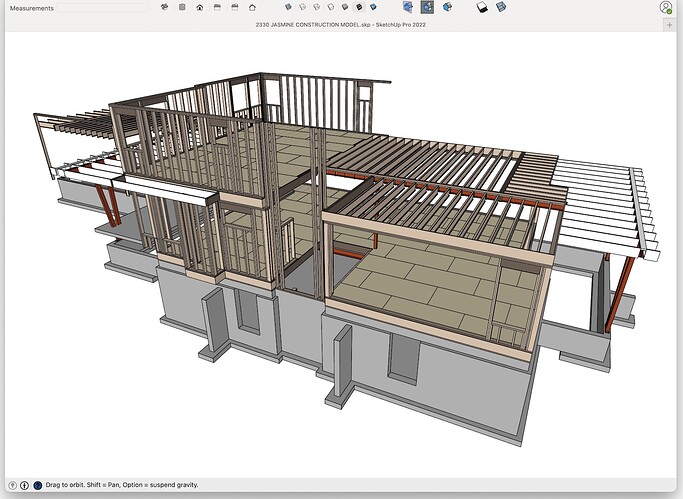 I think you have too many tool palettes on your screen.