How do i fix these changes to export to 3d print?

I am lost where to start and how to actually fix these, is there a shortcut?
FILE: theory path.skp (1.2 MB)

The nested items shouldn’t be a problem for your slicer.
The rest is self explanatory - faces missing on the outside, and faces on the inside just hanging around. There are some auto-fix things out there, but just dive in and make one or two manifold by removing the inside faces and adding the external faces, and the rest should be easy.

Your model is a mine field of 3d printing issues.
Firstly you don’t seem to understand the concept of a solid object. Sketchup is a face modeller and so you need to make ‘watertight’ shapes with no internal faces or stray edges for things to be considered solid. You have many of those internals.
Then you have a repeated shape that isn’t a solid and can’t be due to the laws of software physics. You can’t have zero thickness ‘things’. on your repeating shape you have a sort of star effect that means 8 faces are sharing 1 edge, this doesn’t work. When points come together like that they are creating a zero thickness, which can’t exist.
Then when you look at some of those shapes you have them rotated onto a similarly impossible edge, a 3d printer can’t do that.
Even if all the errors were corrected the resulting print would be a nightmare of support structure.
This type of thing would be far easier to work with and print as individual parts that you fitted together once printed.

Having now actually inspected the model, I agree with the comments made by Box. The reported issues are with the stairs. However the multiple shapes should print - individually, laid flat, as suggested. The points where there is no thickness separate in my slicer. 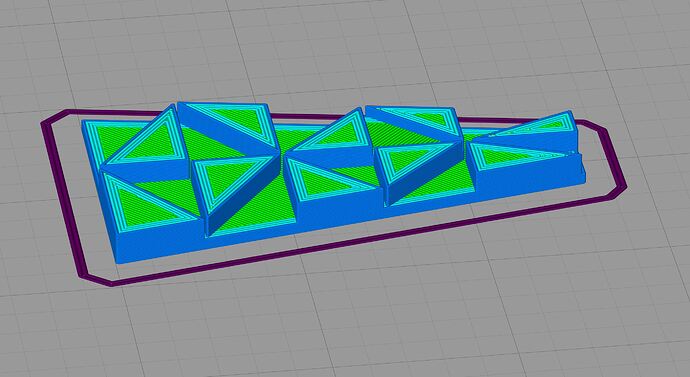 So what your suggesting is that the component I continued to copy and paste had flaws in it that are not 3d printable so best thing is to do is recreate then run the solid test on it before putting it in the rest of my model? Also i should go in about .5" on each contact point between the ground and shape and allow it to sit on a flat surface? Ill give that a try but let me know if there is something wrong with what I think you are suggesting.

Thank you all for your replies!

Update: I started on the stairs first and i already cut the interfaces from 1000 to 500. I will finish them up and then send another file when it is at the lowest i can get and then get your suggestions.

theory path.skp (1.2 MB)
I knocked it down much much more and now i am confused on what to do. Any suggestions? If im correct, is it the triangles on my sculptures? Is there not a gap in the bottom of each triangle big enough to allow it to fill?

This new topic belongs here, I suspect a small mistake

Should print now. There were only a few reversed and duplicate faces to fix - and the was no base to the structure so it wasn’t a solid. Slicers can’t see the back side of a face. As I said, the multiple shapes were ok and should print - flat.
I suggest you also separate the vertical back wall and print it flat to reduce the amount of support needed.
theory path (1).skp (1.2 MB)

Thank You! massive help, this is my first time using a 3d printer in college and I think I have a better understanding of being careful from the start.