I need to measure from the center of a circle to an edge. (so I can know where to drill a pilot hole.)

As you can see in this video, it seems to hint at possible endpoints, but clicking to create the endpoint just doesn’t do anything.

Is it a bug? Why would it let me start a measurement that can’t be completed?

Measurements between edges works fine - I only get stuck when starting from the center of a circle.

I don’t understand, what are you doing differently? I can’t see when you’re clicking.

Note that I’m on SketchUp Free, on the web.

You try to create a dimension up to a line, but which does not have a grip point there. Use one that exist, like midpoint or endpoint, or create one if you want. The principle is the same, whether it is for the desktop or for the web version.

Ah, I understand now - you can only measure between points.

Subdividing my edges seems like a bad idea though. I don’t want to add unnecessary geometry - that will almost definitely come back and bite me when making changes later.

To avoid that, I used the tape measure first, which creates a point intersecting with the edge:

(Still, why does it appear to suggest points on edges that aren’t allowed as endpoints? That’s really confusing.)

What is the end result you want?

I just didn’t understand that these tools only worked between points.

Thanks for you help.

But that’s why I ask, you may well just be able to start a guide, move in the correct direction and type a distance.
There are many ways to do things and it is often only when you see the final result that you can offer a better solution.
If you are happy with your method then we are happy too.

See this SU file for ideas.

Subdividing my edges seems like a bad idea though. I don’t want to add unnecessary geometry - that will almost definitely come back and bite me when making changes later.

To avoid that, I used the tape measure first, which creates a point intersecting with the edge:

You seem to be missing the point, also literally (midpoint that is).
There is no need for creating intersections with guides, also no need for extra geometry nor for dividing edges. See both images below: 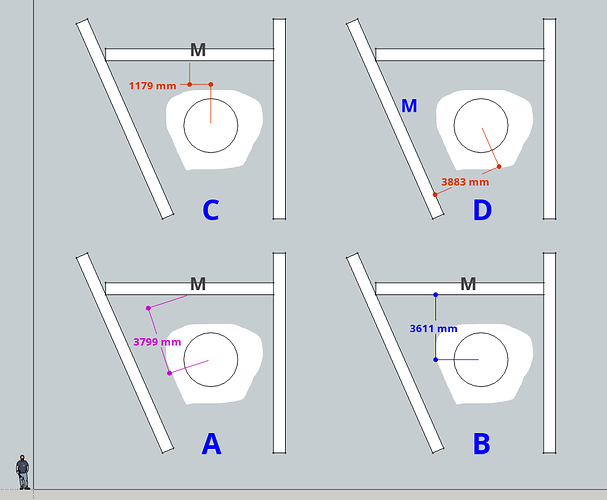 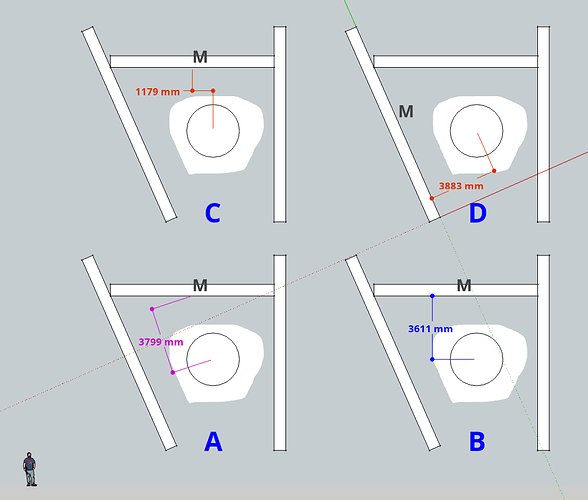 To avoid unnecessary reactions, my answer is to demonstrate the use of inferencing of midpoints, not to show the beauty of dimensions in (construction) drawings. To me it seems OP was having difficulties in finding where to drill holes. Once you know that you can take it a step further.

Sorry, but none of the drawing standards provide for this type of dimensioning, i.e. from the midpoint of the line. Not like this. If you do (as C), you have to draw a local axis of symmetry

A more proper form of dimensioning would be to place the dimension outto one side. Then you can use the corner for anchoring the upper end of the dimension. 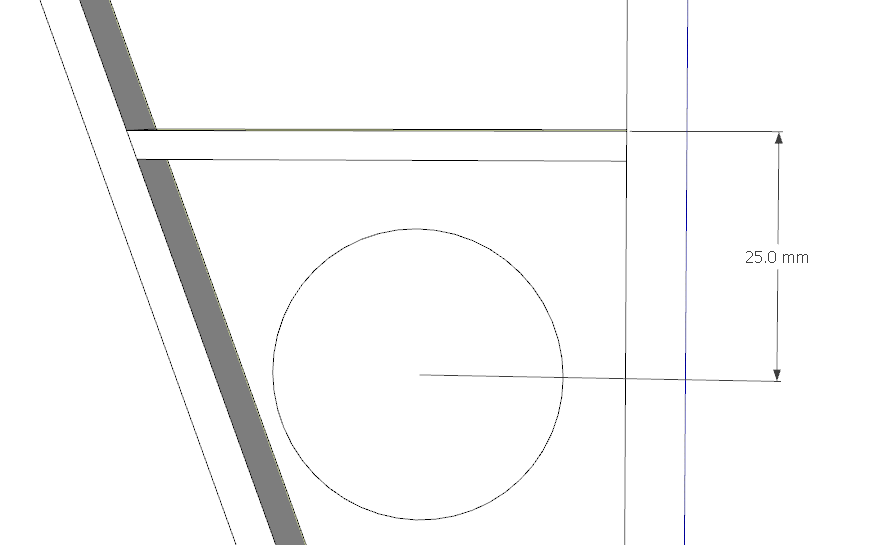 Ahh, I see now. If I measure from the center to, for example, a point on the corner above, it’s not necessarily measuring the distance between those points - you can decide the direction you want to measure in afterwards.

Am I doing it right?

Am I doing it right?

You can even rotate dimensions (say 90 deg.) later if you need the other orthogonal distance towards another edge perpendicular to the first one and from the used mutual corner endpoint.