Aspect Ratio and Angle of View

Did someone ask about this? [Sound of crickets] No? Well, I’ll talk about it anyway.

The output dialog isn’t really surprising in that it ultimately works like desktop, but the thing to think about is this: iPad’s mostly seem to have an aspect ratio of 4:3 while most monitors with desktop are 16:9 or so.

As it’s been pointed out, the thing that normally rules with SU angle of view is the vertical one, and that’s what the angle number in degrees corresponds to. (I recently discovered that what SU reports as a focal length is all messed up, at least if the intention was to relate to 35mm photography, so I never look at that.) When you output a raster image (png, jpg, etc) on desktop and you want a specific aspect ratio, you get the full vertical view of the screen and typically lose something off the sides because of the wide aspect of the computer monitor. On the iPad with a 4:3 aspect, if you want a wider aspect, you again still get the full height of the screen but get more than what you see on screen. So, in retrospect, it’s maybe not surprising the behavior is consistent, but it might not be obvious that you can render more than what you see on screen. 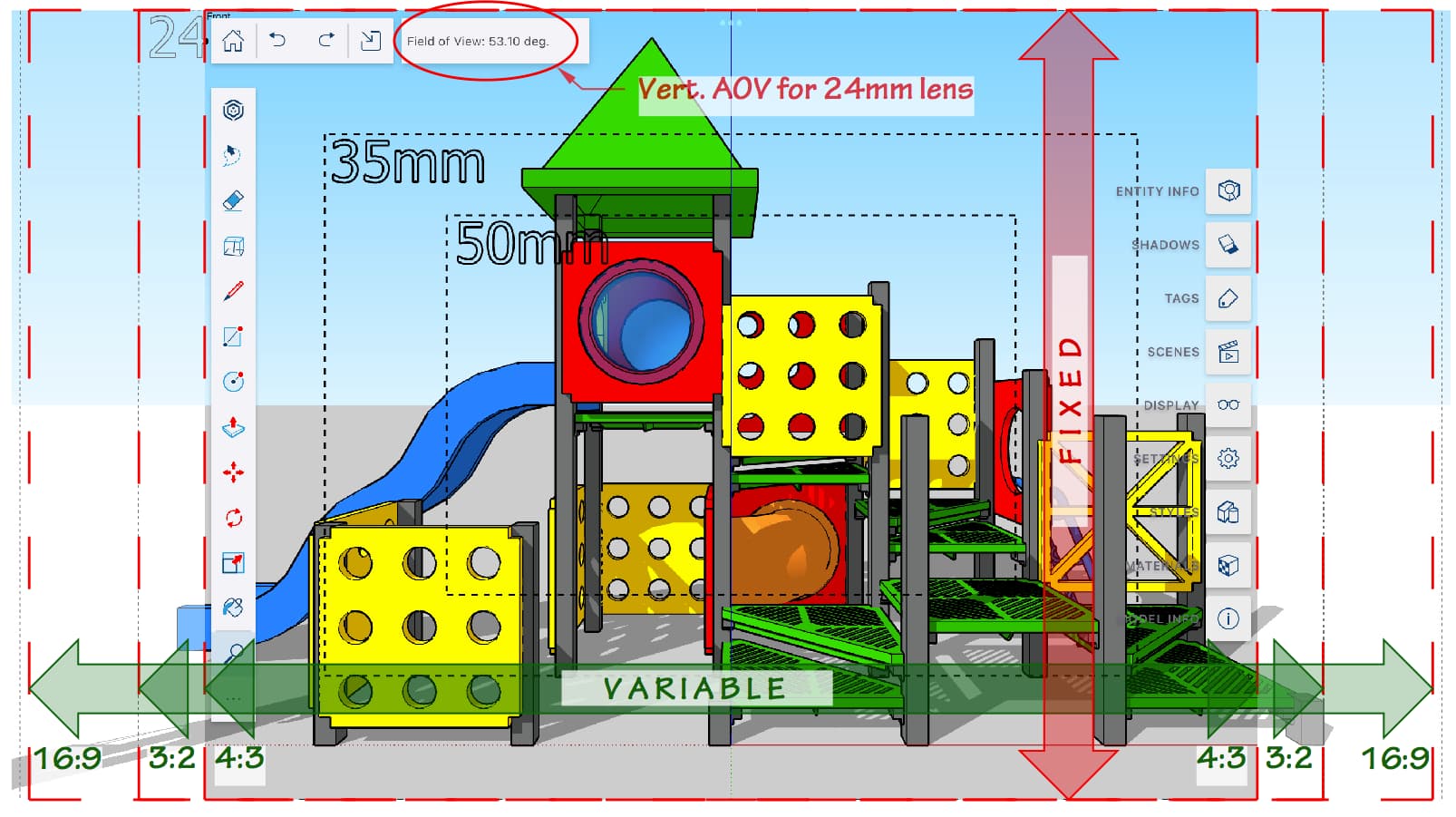 Very nice to know. Thanks!

The zoom tool works as it does on desktop by “Zooming with your feet,” as a photographer friend of mine teaches his students. On desktop, holding shift zooms with the lens focal length, but I don’t have a keyboard to test that on iPad. It’s not offered in a popup as an option with the tool. You can do it numerically by typing in a different angle of view in the input box, but you can’t drag to get that zoom-with-the-lens effect.

There’s also no Field of View operation either, is there? I don’t miss it much because I never liked it, but some others do apparently.

3-finger swipe up/down at any time.
With the Zoom tool active you’ll see the FOV values change in the measurements box, measured in deg.

Aha. Ok, that’s the Field of View operation which changes both the camera location and angle of view simultaneously. Is there a dragging operation that changes just the angle of view? (Zoom+Shift on desktop) If I had a keyboard, would that work?

3-finger swipe up/down at any time.

…and that’s documented in the cheat sheet instructions now that I look at it. Sorry, I guess I knew that and forgot.

Happened to me too. There should be a specific tool for this, imho.

Ok, that’s the Field of View operation which changes both the camera location and angle of view simultaneously. Is there a dragging operation that changes just the angle of view? (Zoom+Shift on desktop)

Thanks for pointing this out! After going back and testing this, I can see where we whiffed a bit on the 3-finger swipe gesture. I had intended for the gesture to be identical to the Zoom+Shift operation… we’ll take another swing at it.