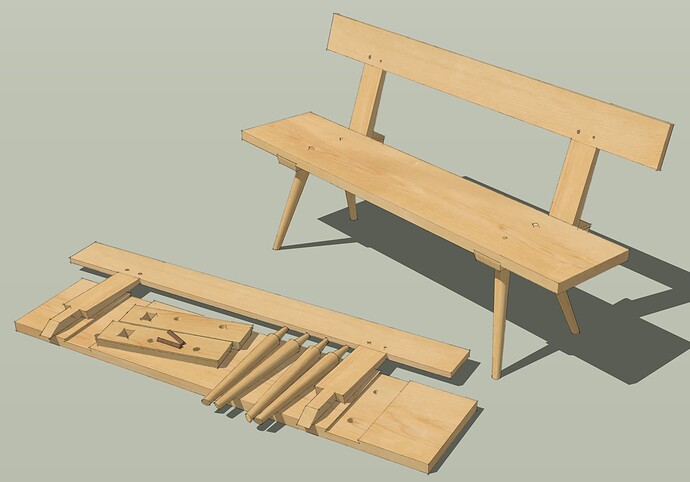 Based on benches found in Amana, Iowa. Originally made in Ebenezer, New York, they were sent to Iowa in 1846 when the community relocated there. Designed to be knocked down–at least the back rests removed–when not in use.

Thank you. That would be the before any assembly stage. The cleats and legs would be glued in with wedges in the legs, too. Only the back rest assembly would be removed between services.

That would make a pretty neat garden bench too. Might need slight adaptation, say by cutting through grooves in the seat to allow it to drain off easily.

The seat does slope down to the back a little.

I would say that here in the UK, the drainage is critical but as we have so far seen NO RAIN all summer, maybe I shouldn’t worry. Desiccation a more likely problem.

Good kiln dried lumber a must this year I guess. Could also split the seat into some narrower boards and leave gaps. The cleats are dovetailed into the bottom of the seat and need only be glued at the front.

Good kiln dried lumber a must this year I guess.

A double edged sword. Here in the UK we can get hold of several different types of oak: English, French, American White and American Red. But the only time I have ever had to reach for my PI cover (many years ago thankfully) was after specifying American White for some flooring which pretty quickly rose up like a demon from underground. The problem that no one realized was that American timber is kiln dried to within an inch of its life. Suitable no doubt for much higher internal heat and/or air conditioned environments but in our relatively warm and wet conditions, rather unsuitable. Probably would have been OK if conditioned indoors for long enough before laying. Or if clients had taken my advice and not switched the underfloor heating off for long periods…

Yes. Even fully kiln dried lumber needs to be given time to acclimatize And any wood floor laid on a concrete floor that isn’t kept heated for long periods will have problems.

Originally made in Ebenezer, New York

Hmmm… I thought they were German, Swiss, and Austrian.

There are some good German restaurants in the colonies.

That flatpack style is definitely Ikea.

LOL! Slow on the uptake this evening.

I should have used a ?

A more correct view of the way the bench knocks down when not in use. 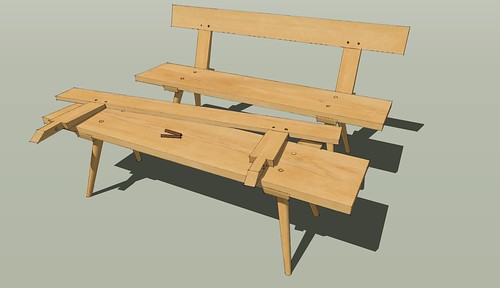 It shows the benefit of having textures from long boards. I was able to use different parts of the same “board” for each seat and back rest board. 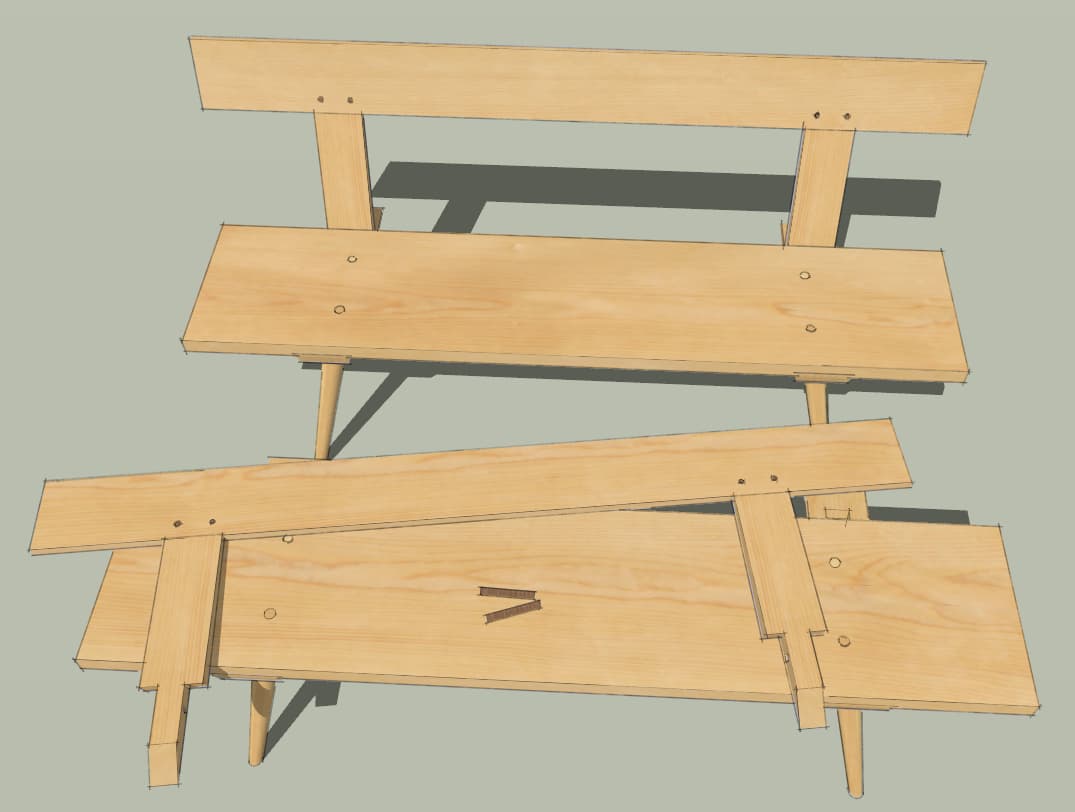 Thank you. You should build one.

A few seconds with the board stretcher and a longer bench with an extra set of legs is born. The longest of the original benches is 23 feet.