Many buildings get set out on a grid and I am designing one such now. I am having problems getting it to work with sufficient accuracy.

I have drawn the outline of the walls and some steel posts on plan in SU. As a grid really needs to show up as a broken line, I exported the SU file to LO so that I could use its wider variety of line styles. Drawing a grid is simple enough but I have found lining up the SU window so that it centres accurately very hard. I must be doing something wrong.

As the building is square, I want the offset of the grid to my plan to be equal on all sides. I can achieve that roughly quite easily but not with mm precision which is what I need (the steelwork will be designed to mm precision). How should I go about doing that?

Another thing I don’t understand is why this simple drawing is over one Mb in size.

I attach a copy of the model as it currently stands.Grid.layout (1.1 MB)

You can move the Precision point (located by default at the center of the viewport) to the middle of an edge and snap that to a grid line. Repeat for the other direction.

I would probably handle it differently. I would make the grid in the SketchUp model overlaying the plan. I would put the grid on a spearate layer and create a scene that shows only the grid. Then use it as a second viewport in LO. Render the grid’s viewport in Vector and explode it. then change those lines to the dashed grid lines. Sounds more complex than it is. I’ll modify your SU file and upload it.

OK. Take a look at the attached files. Look at the scenes called (Basement) and (Gridwork) in the SU file. While looking at the Basement scene, turn on the Gridwork layer. You’ll see if overlays the basement. I made stacked viewports for the basement and the gridwork. Copying one and pasting it puts it in the exact right position and then it’s a simple matter of changing its scene and exploding the gridwork scene. Render the grid viewport as Vector. Then, after ungrouping the lines, convert them to the dashed line style of your choice.

You’ll notice in LO I added a layer for the gridwork so it can be manipulated without disturbing the basement viewport below. 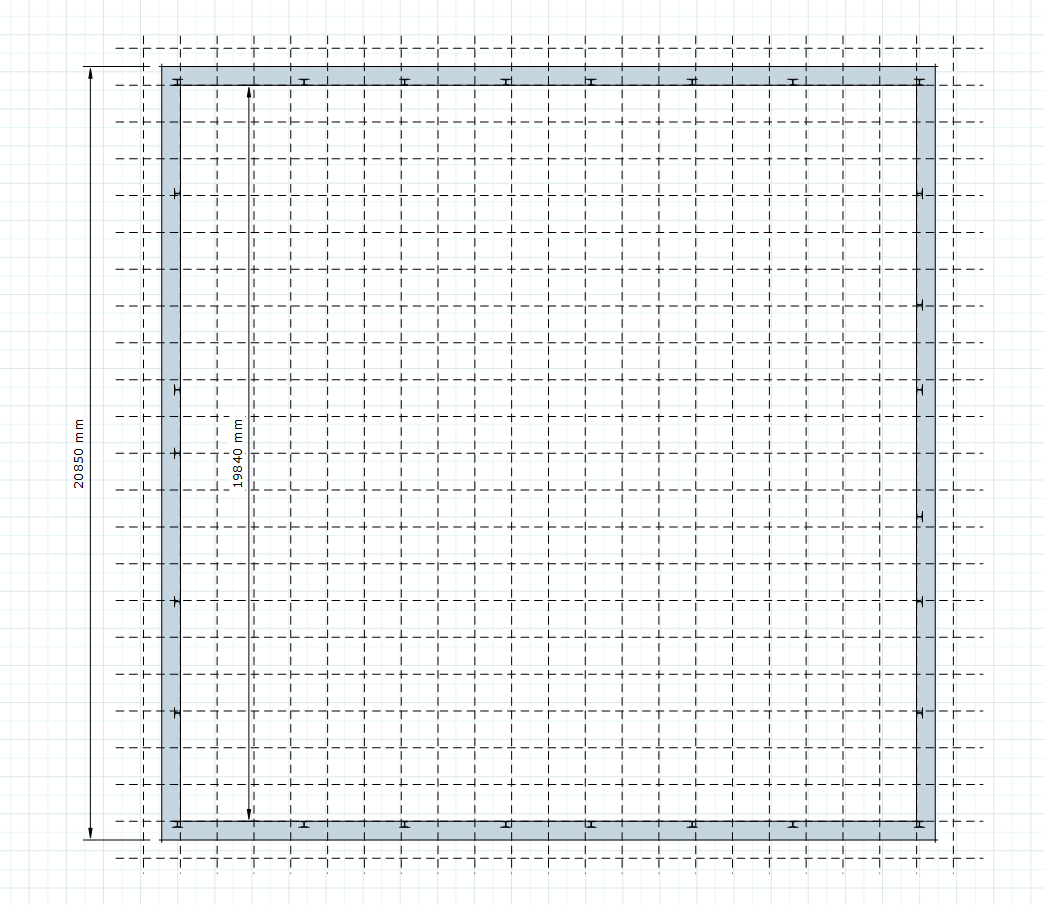 I know we talked about this before but I’ll bring it up again. Modifying the scene in LO such as you did in this file, just creates problems. Don’t do that. I fixed things so as to get rid of the “modified” tag for the scene.

When the LO file is first opened the scene shows as modified. 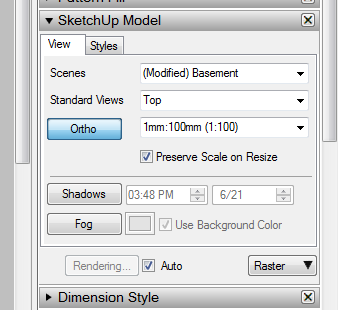 After choosing the unmodified scene the scale is no longer selectable because in the scene in SketchUp the camera is set to Perspective instead of Parallel Projection. 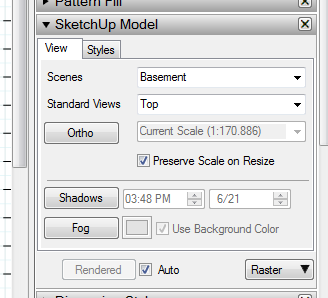 If you would set the camera to Parallel Projection for that scene, you wouldn’t need to set the viewport to Ortho. It would be handled automatically.

Also, make it a practice to use Zoom Extents to center the model and make it fill the drawing space in SketchUp when you create the scene.

Do not open the scene in LO to adjust the camera position or zoom as this will also cause the scene to become modified and thus disconnected from the original scene.

All fantastic advice. It’s like having my own personal guru! Thanks a lot.

Thanks Simon. I’m glad it helps.

By the way, if you modify another viewport I’m gonna take you out behind the woodshed.

I have just tried following the steps you took to create the dotted line grid in Layout. I understand the concept of creating the grid in SU and creating its own layer and scene. Importing the grid scene is fine but when I explode it, it creates an image of the grid which has uneditable lines and a background. You must have done something to get the lines out of the image window and into LO so that they can be edited. What was that step?

My apologies. I neglected to add an important step.

Before exploding the grid viewport, render it as Vector. Then, when you explode it, the lines will be editable like other lines drawn in LayOut.

Excellent! I edited my other post to include that step.

One last question. A grid of this kind needs to be centred on the plan. Is there a quick way of making sure it is?

What I tend to do is to create the LO file from within SU. Then I have a scene ready imported showing, say, a floor plan. To create a second scene I copy the imported window and then change the scene to the grid. But because of the way it was saved in SU, it may not be centred the same. I can move it of course but it can be fiddly to make sure it is in the right place. I’m guessing there was maybe something I should have done in SU in creating the scene that would mean my copy was in exactly the same place. Is that right?

I’m guessing there was maybe something I should have done in SU in creating the scene that would mean my copy was in exactly the same place. Is that right?

Look at the SKP file I supplied, above. With the Basement scene active, turn on the Gridwork layer. You’ll see that the grid is centered over the model. When I created the grid, I started by drawing a vertical line through the midpoints of the top and bottom walls and copying it out in each direction. Then I did the same for the horizontal lines.

Notice also that the walls and the grid are centered in the drawing space. I used Zoom Extents to make the drawing fill the space as much as it can.

This is another reason for not modifying the scenes in LO. You absolutely have to keep the viewports related to the SU scenes. Do not open the viewports to adjust the position of the model within the borders of the viewport.

Yes, there’s no problem creating the grid in SU set out from the centrelines. Even if you drew it remotely and then wanted to centre it on the plan, that too would be easy, not least by using construction lines. The problem comes when you are in LO.

It is quite likely that centering the plan drawing by using Zoom Extents will give a very different centroid from doing the same with the grid. That means the viewports in LO will also be quite different and so you inevitably have to move the grid before or after exploding it. That’s when it start to get tricky. Or at least it does for me as I find the Move tool in LO not very intuitive. Even when you think you’ve got it right, zooming in can sometimes make a monkey out of you!

Unfortunately, LO does not have a construction line option, which might solve the problem. You can do it using ordinary lines and then deleting them but it’s a bit clunky. The biggest problem is that you are never quite sure where the magnetic points are.

BTW, I don’t normally modify scenes in LO (honest!). What sometimes happens is that I forget to lock the scene to Parallel Projection before exporting to LO. I certainly never open the scene in LO (that way madness lies!).

Where do you get this stuff, Simon?

It is quite likely that centering the plan drawing by using Zoom Extents will give a very different centroid from doing the same with the grid.

Huh? The only Zoom Extents you do is on the floor plan. You create the scene with the gridwork layer turned off, change the layer states so the floor plan is turned off and the grid turned on and immediately make another scene without moving the camera. Since the grid is position over the floor plan in the desired orientation and since the camera is in the exact same location for both scenes, the two will line up correctly.

…and so you inevitably have to move the grid before or after exploding it.

No. there’s no reason in the world to have to move the grid viewport in LO if you’ve done as I described above (and as shown in the SKP file I uploaded). The two viewports will line up exactly as you have them set up in SketchUp.

I really need to show you this in person so you can see how simple it really is.