I am new to sketchUp or any program like it. I need to import plants, rocks, shrubs & trees. I looked at 3d warehouse but when I did import a shrub it showed it as a thin line from overhead. I need to see the width from over head & also need to label everything. Any suggestions, with specific instructions, would be great! Thanks!

You need to make sure you’re importing 3D components as opposed to 2D components from the warehouse.

still just gives me a straight line from overhead

Paste a link for the specific warehouse component here so we can look at it.

is this what you mean?

hmm link not showing up…

Also wondering, as I add plants, how to make sure they are scaled to my drawing?

And, if i later want to move a plant, can I? Say I put a bush somewhere than later realize it needs to move over, how can I do that when I already added other items?

Must each new plant be on a new layer?

It may be helpful to determine how you want to use the entourage elements being imported. If you bring in a bunch of 3D rocks, plants, etc., this could significantly increase the size of your model and could potentially slow down the operation of your system because each component has a relative size. This may not be an issue if the size of your models are small, but if you are working on a large site or an intricate building, the supporting entourage elements could pose a problem…

For my large models, I make use of 2D entourage elements and save them as “face me” components. This helps keep file size manageable. Where I need to see these elements from above, I use multiples of the same component overlaid at right angles to each other, sometimes with the outline emphasized as a circle. See attached as an example…SiteTree_typ.skp (486.9 KB)

I am working on a garden plot that has some changes from the original CAD drawing, so I am trying to replicate it with the plants not shown that have died or been moved and adding the new plants. There is a lot of duplication in the plants.

It sounds as though you will benefit from reviewing some of the introductory tutorial videos . Many of your questions can be addressed by learning some of the basic functions of the software. See the attached playlist as a start. https://www.youtube.com/view_play_list?p=F001616C0ADF4245

Also, if you can provide a link to the file you are attempting to import, that would help others to help you more effectively.

There is a lot of duplication in the plants.

You can easily copy items using the move tool with the ctrl key on PC systems (There is another key sequence for Macs, but I am not aware of this because I operate a Windows based system.

If you are getting a single line in Top view, then the component you have imported is simply a 2D billboard, designed to be viewed at least partly in elevation. True 3D plants will look as expected from any angle, as this gif illustrates.

Of course, filling a garden with fully 3D content just to get a plan view will likely bring your computer to its knees. What you are going to need are 2D billboards…but plan view, not elevation view. There are plenty of architectural symbols for trees…like this… 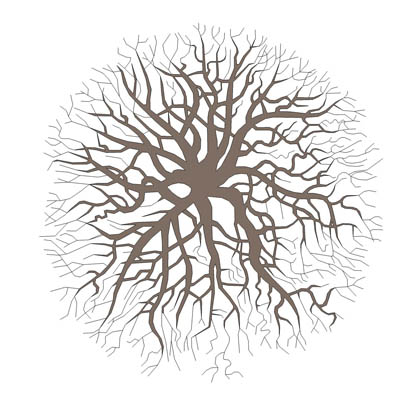 …but plants like annuals and perennials are very hard to come by. There’s simply very little call for them…especially in SketchUp, which is a 3D program.

You may find some freebies in the Warehouse or elsewhere on the Net, but to be honest, you’re probably better making your own from a selection of prefabricated elements like a small variety of leaves, with simple circles or polygons for the blooms.
These can be readily duplicated, as already explained…but the original of each plant needs to be a component (or at least a group) to keep the geometry separate when they are inevitably overlapped. Layers won’t do this. Layers are solely to control visibility. Draw everything on layer0
Making a plant a component, also enables you to name it “Alium” or whatever, making it much easier to keep track.

So, i’ve been frustrating myself over something that is not possible. yea, go me! ugh.
where do i find 2d billboards? These are overhead shots, right? I could always just use circles I suppose to, and I guess I’ll draw the huge rocks, but thought something like your 2d billboard above would make it more interesting
.

to label can I just make a box and type in it? I don’t want a label pointing to where the object is. I want to put the name in the object. But it always is off to the side and I can’t resize the text box to make it fit the whole name I want in it.

You could always do an image search for plants in plan view, save some of the images, import the jpg file into SU then trace around the outline to get rid of the white background.
https://uk.images.search.yahoo.com/search/images;_ylt=A9mSs3eWnr1X.FQAOJdLBQx.;_ylu=X3oDMTB0ZTgxN3Q0BGNvbG8DaXIyBHBvcwMxBHZ0aWQDBHNlYwNwaXZz?p=plants+in+plan+view&fr=mcafee&fr2=piv-web

The 3D drawing window in SketchUp isn’t really designed for fancy labelling. It’s a 3D modelling program, not a drawing program. For that kind of graphical layout, you’d need Layout…which is included with the Pro version.

One trick is to put a 2D plan image of a plant inside a 3D face-me component, on a different layer. Then you can create scenes with the irrelevant parts hidden. Some of the sample SketchUp trees used to be constructed in this way.

Your best bet is to purchase the Pro version of SketchUp, as it includes LayOut. Additionally, as others have said, use the 3-D models sparingly.

I’ve just started adding a circle to the base of the 2-D plants. I use the color dropper to pick a color from the plant, paint the circle that color and then pull the circle up 1". This quickly solves the problem of seeing only a thin line. It’s important to only bring in one shrub component (as an example) and then ‘copy’ that shrub component within your model. This way, when the the circle has been added to the one 2-D shrub, the remaining copies (of that shrub) will automatically have the circle added to them as well. I add the circle to the 2-D plants only once I am satisfied with the model, and just prior to sending it to LayOut.

Once the model is in LayOut, it’s very easy to label everything and the finished results are very satisfying. Hope this helps. Going forward, I will only need to present one LayOut version to my clients, rather than two like I did here. See attached examples. 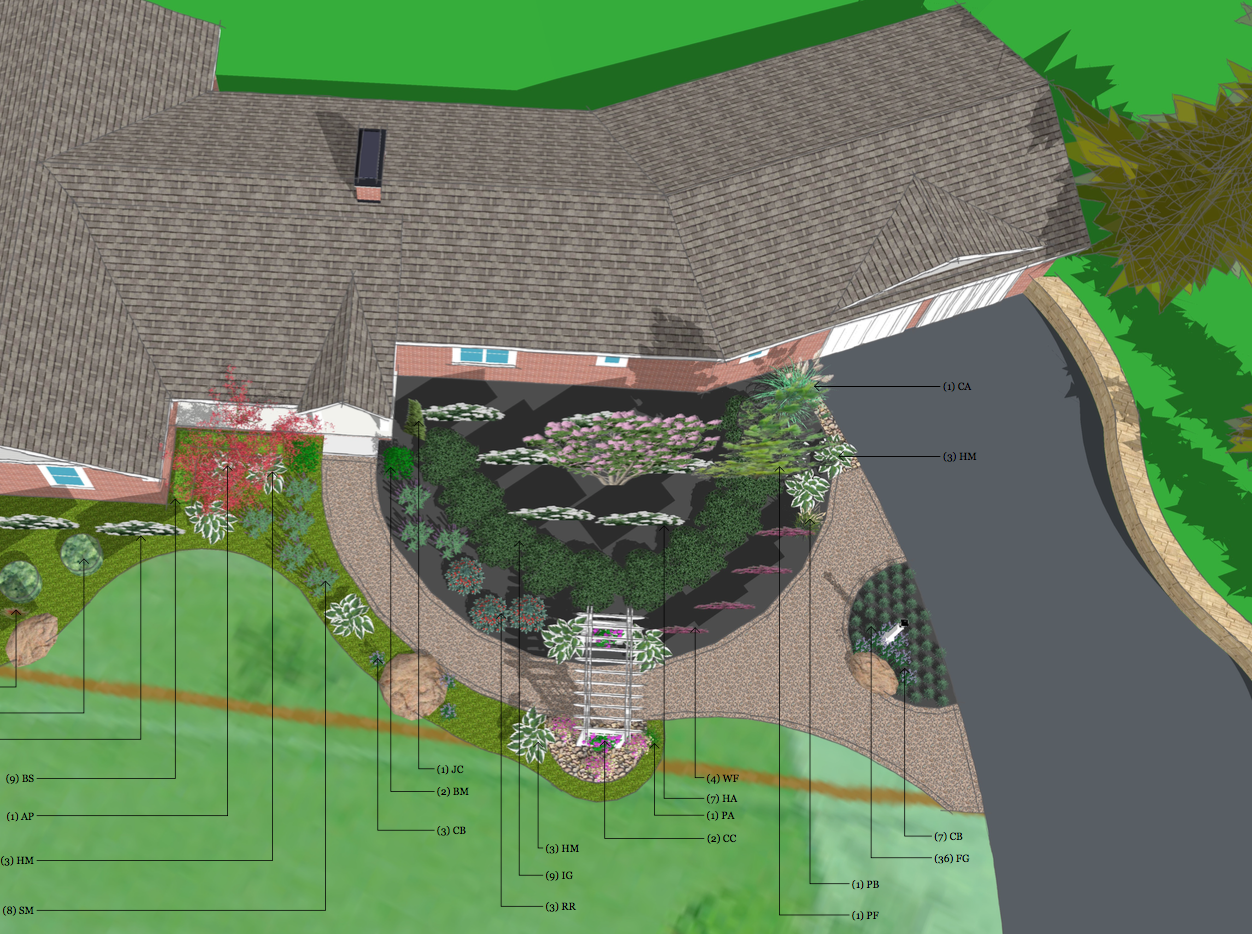 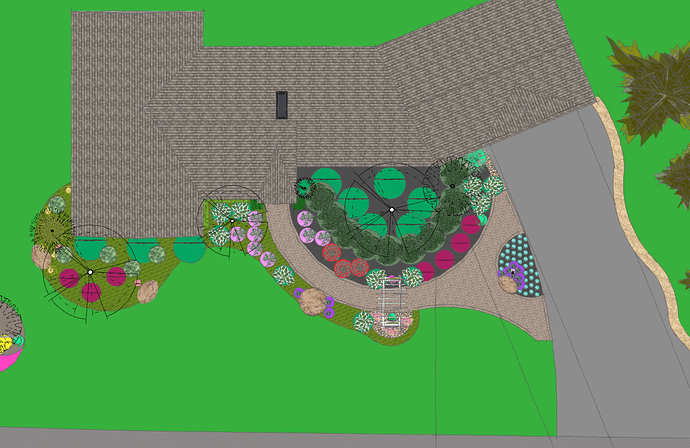