Want to export only the edges

I’ve download SketchUp for my drawings project and I need to export only the edges of my 3D model. It means I don’t want to see walls and all of that. but the problem is that even if i’m using a style where you can only see the edges in black on a white background, when I export this in a jpeg format, white is not transparent. So how can I export these edge without any background ?

Jpg’s do not support transparency. You can export a PNG with a transparent background. You can also edit the exported image to make the white transparent.

But even with PNG there is still white, the only way is to edit to make the white transparent ?

You could make a Wireframe export but you’ll see all of the edges on the back of the 3D model. If there are faces in your model, they will be exported.

What are you going to do with this image after you export it from SketchUp?

But even with PNG there is still white, the only way is to edit to make the white transparent ?

Look under the Export Options button.

But even with PNG there is still white

change your viewers bg colour to check for transparency, some use checkerboard…

Geo, I mentioned exporting with a transparent background but the faces in the model will still be exported as I said before.

… the problem is that even if i’m using a style where you can only see the edges in black on a white background, when I export this in a jpeg format, white is not transparent. So how can I export these edge without any background ?

@Edo
So we can all understand what you’re doing, might you use the terminology you see in SketchUp.

From here, it sounds like you’re viewing the model in Wireframe wherein only edges are rendered, no faces.
And you want to export an image of the wireframe model which has a transparent background.
Is that correct?

Exporting a PNG with the Transparent Background option ticked will do just that.
Here’s a screenshot of such an exported PNG as viewed in an image editor.
The checkerboard indicating transparency.

A more normal view of the model in Monochrome Face Style.

Here is the problem ! The faces are in white in sketchUp so when I export this it’s in white too ! I want to get only the edges like in your image… where can I see this, “wireframe” ??

(sorry if I not explained well i’m french)

Wireframe is a setting under View>Face Styles.

Even if I check wireframe I still have this in sketchUp :

And after the exportation I only have the fond in transparent, not the faces. 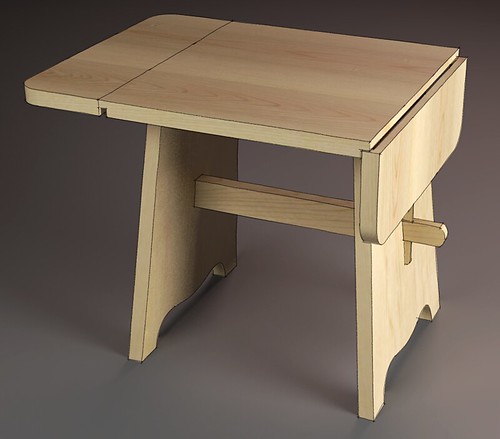 HAH ! Thanks it finally works !

I’m using those edges for some plans of different rooms for my comic. You can see a tutorial just here -this is why I’m using sketchUp today- : Some old and outdated tutorials I made in 2012 on how I use 3D models in Sketchup to save time on drawing multiple backgrounds in my comics. I will be making a new tutorial in the future with more tips, shortcuts, and techniques :)

and I just want to try to draw something like that. So I need different types of edges to put on a colored and 3D background to see this like if it was a drawing.

It looks like you could do the same thing I did with the table image. White background and faces. Set the layer for the line export to Multiply and the white areas will be transparent.