I thought that I could just move/copy the threads up to make a vise bolt but does not work. Is there a way to use the work done before to make a longer vise bolt or do I need to do it from scratch.
Vise Bolt.skp (181.6 KB)

You’re almost there. You just need to move the copies correctly. The bottom and second one overlap and aren’t alogned correctly…

There’s a gap between the second and third ones.

With the 3rd through the top one you can use Outer Shell to combine them. 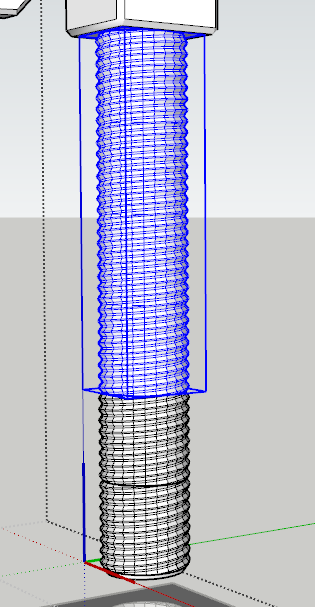 Time for me to learn about outer shell. I’ll do some research, thanks.

I managed to make all bolt threads as solid. Then I started using outer shell. The bolt became three groups but solid inspector then detected errors. I managed to achieve solid groups, but when I inspected the entire vise bolt component, it showed three nested parts. I then move/copied the bolt and scaled 1000 times. Nothing worked at getting rid of the three nested thread groups. I deleted the the giant scaled vise bolt component. After zooming for a long time, I could see a line a fraction of an inch but could not find the other components. I opened the component window and purged. There were no components left. You see I had to edit component to correct errors while it was scaled 1000 times. When I deleted the vise bolt it was not in the edit component mode. So I do not know why the other parts disappeared. Oh well, I still have the work I did filed as Vise Bolt skp as in the top of this post. DaveR this is the update.

After you used Outer Shell the result was a group. The Dave method doesn’t work with groups. You would need to convert the group back into a component first.

I will try again after converting groups to components.