For the building permit on a renovation job I need to have the old and new features together in one plan. Here in Switzerland this is usually done with color codes: 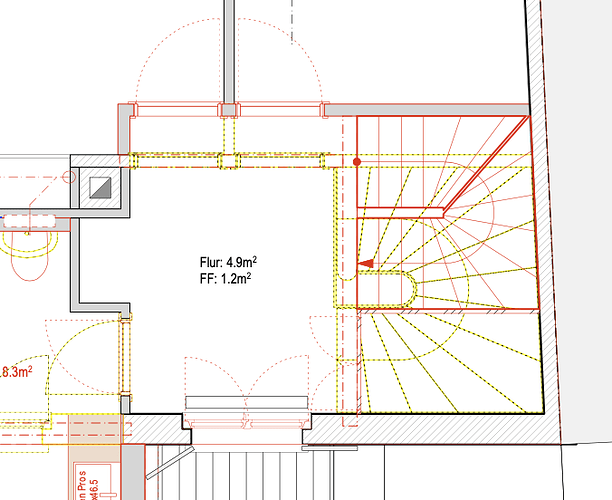 In the model, it’s easy to have both and turn them on and off. With scenes I was also able to create the floor plans in LayOut, but only a plan representing the existing situation and one for what is going to be built.

It would be great if Aaron could make a “Let’s talk Layout” video showing us how to combine two scenes in one LayOut plan with a color scheme. Or can anyone give me some pointers here?

I would make two-three different plan view scenes:
One that shows existing features, one for things to be demolished and one for new structure.
Then, in LayOut, I would put the scenes on top of each other and apply suitable style overrides (linetype, colour, width) to each.

I think @Anssi has described it pretty well. If you ensure that the camera is in the same location for both scenes in SketchUp you can place the first one in LO and get it set up. Then copy it and paste it to the next layer up in the list and change the scene. Put each viewport on its own layer so you can access the viewport on the bottom easily if needed.

FWIW, it could be done with a single scene in SketchUp and stacked viewports with different visible tags in LO.

This is a different application of the same basic idea. This is from a plan I did for a workbench. In the SketchUp model I have a single plan view scene. In LO there are three copies of the viewport stacked up; one layer for each. And in this case I also added a “scrim” with slight opacity above the bottom-most viewport. I tinted it yellow for this example but it’s really just white.

Thanks guys. This is pretty much what I also came up with. It does require quite a bit of fiddling around in the model (e.g. separating sections of a wall into a separate object to be able to assign it to separate tag) but I think I’ll manage this part. The styling of the scenes will probably also cause a bit of try&error as I have not done much of this yet. But it’s good to know that I was on the right track! Thanks!

It does require quite a bit of fiddling around in the model (e.g. separating sections of a wall into a separate object to be able to assign it to separate tag

Not sure I agree that one needs to do that. A separate stacked viewport in layout should do the trick. That top viewport could have the overrides that Anssi mentions, and also be wireframe, so that is shows only linework from the original plan on top of the proposed plan. Obviously the original walls needs to be on a separate tag.

If you have sketchup pro 2022, you can manage the style of every skp tag on layout, it’s a new feature only available on skp 2022, it’s very useful cause you can have different line weights and colors on the same viewport, if you tagged everything properly.
If you don’t have the latest version, the solution would be to create scenes on skp with diferente styles and on layout place them so they fit in one plan.

That’s exactly how I do it. Stacked viewports (existing / demo / new). I also use color for demo elements for clarity.