This is my first 3D model. It is a preliminary design by Frank Lloyd Wright.
I started out grouping everything but it seemed counterproductive. I’ve been drawing brick course lines on my masonry mass groups but they are just a skin; I don’t know how to add them to each group.
Some faces just flat out refuse to close, no matter how many times I draw around them. A prime example is the top batten of the 2nd floor balcony. Others refuse to accept color, or the coarse lines refuse to turn fine.
The biggest wound is the open face on the underside of the same balcony. My attempts to clean things up caused a tear from the balcony, through the kitchen/dining ceiling, and out over the carport.
I have found there is a 1/16" error from one side of the entry area ceiling to the other. I have been trying to resolve this, but the area is too confined and it exascerbates my current chief complaint with SketchUp.
When virtually backing up in SketchUp, why is there no resistance when you encounter a wall? Even if I slowly click backwards, once I touch a wall, I am rocketed backwards through it. Only then do I encounter resistance as it takes at least ten clicks of the scroll wheel to get back where I was. Is there a setting adjustment for this? I would like to have just as much resistance going backward through a barrier as forward.
I am still new to 3D modeling, I find the basic control descriptions only a start. Is there a SketchUp modeling for Dummies book yet? I would greatly appreciate it if there was one.
As always, thanks for the amazing help you guys provide.
FLW Rentz House 3D Model.skp (11.4 MB)

Have you gone through the instructional content at learn.sketchup.com? What about the SketchUp YouTube videos? There is a book called SketchUp for Dummies if you’d rather have something in print. 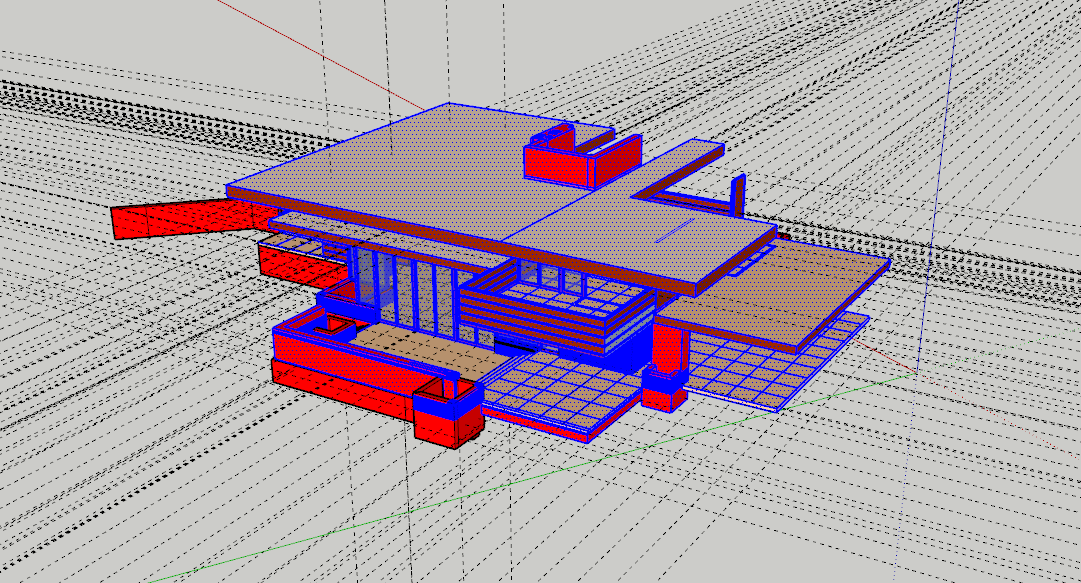 It would also help if you were creating your model on axis. You can rotate the whole model later if need be. And delete your guidelines when they’ve served their purpose so you don’t have so much clutter.

I don’t know how to add them to each group.

Open the group for editing before adding geometry or textures to it. Select the group and press Enter.

A prime example is the top batten of the 2nd floor balcony.

There’s no outer face. The edges around the opening are not on the same plane so a single face can’t exist. I expect a large part of the off plane issue comes from the fact that you are modeling off axis.

The geometry in your model is very difficult to work with because you aren’t using groups and components. You also have a lot of exposed blue back faces which you shouldn’t have. Best practice would be to avoid applying materials until your geometry is correct. the materials mask problems, they don’t fix them.

There are also quite a few faces sharing the same space which creates what is referred to as Z-fighting. You’ll see a sort of flickering of faces as you orbit. 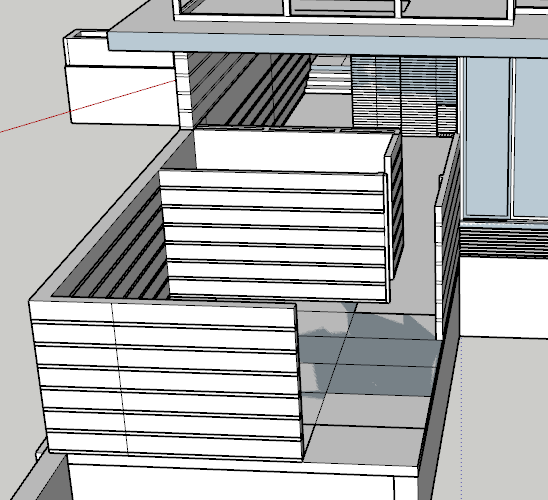 SketchUp doesn’t have collision detection for the camera when zooming, panning, or orbiting. That makes it easier to work with the model. With practice you’ll get the hang of it.

I’d like to be able to suggest some simple ways to fix your model but at this stage I think the easiest fix would be to start over. Model on axis, use groups and components, make sure faces are correct, and plan to use textures instead of drawing in the small details.

Thanks for your help, Dave. The thought of starting over is really depressing.

Understood but I think you’d find yourself extremely frustrated trying to fix the “disaster” you have in this model.

Thanks for your help, Dave. The thought of starting over is really depressing.

I can understand your feelings. However, spending some time at the 2 linked sites mentioned in post 2 by @DaveR will speed up your workflow and set you on the road to “best practices”. Also you will have a better understanding how the software works.

I just have the Shop version, so I often find videos and other things aren’t applicable.
SketchUp Does apply resistance when you push through a window or wall. I don’t see any reason why they can’t apply it when you are virtually backing up in a confined area. Being shot backwards through a wall is maddening and it only makes me more frustrated with this program.

You aren’t encountering resistance when going forward through a wall, you are zooming closer and closer to the face until it eventually goes through, backing out isn’t the same because you aren’t looking at the face you are backing through.
Sketchup uses the cursor as its focal point and will adjust for things close or far away, which is how it allows you to zoom in close on a face rather than shoot through it when you don’t want to. The down side of that is it can take some time to get through faces with the scroll wheel.

It is great that you are modelling architectural masterpieces …truely the best way to appreciate their designs short of visiiting them… looking forward to seeing it on 3d warehouse… don’t give up you will not find a better tool to do this at an enthusiast level… as others have said… immerse yourself in some of the basic modelling tutorials… don’t throw you work away…once you understand the process you may be able to repair and recover significant elements of your work or at least use it for a reference. It is easy to copy elements form an old file into a new one as needed…

Thank you for the feedback.

Thank you for the kind words. Nice Model!
The 1939 Rentz House was never built. This initial version was rejected for a more modest scheme. I find it fascinating with the two ground levels and the two-story living room. It is the progenator of many later designs like the Boulter House and the Bachman-Wilson House, and even the Loveness House.

Very nice and clean for starters. No saved views?

Thank you Barry. No I don’t think its done yet. It keeps getting uglier.

I think I’m going to try to explode the house and then regroup things.

Unfortunately, it’s often harder to fix “broken” drawings than to start over. Take some time to go through the tutorials. The investment will pay off. Lastly, try the techniques on a simpler structure. Even with skill, a complex building is a challenge and as a novice it could frustrate you to a point of not going further. You don’t pick up a guitar and attempt the lead in Stairway to Heaven for your first piece.

When I got into 3D printing I chose as my first projects very complex replicas of locomotive Diesel engines. I didn’t know what I was doing and paid the price by doing it over and over again until I learned. Good judgment is the result of experience which is the result of bad judgment.

Fantastic project to learn with. When you are modeling, think of how something is built in real-life, i.e. each batten would be an individual board with thickness. The board would be grouped into a discreet object allowing you to move it independently, copy it, resize it. That’s the rationale behind using groups. In the case of identical objects such as the battens, they can be made into Components which are like groups, but will decrease your file size and if you edit one, they all update.

If you are only modeling for the appearance of surfaces and don’t need all of the geometry, more like what would happen at concept level or for game design, a material image that looks like battens or bricks which tiles over a larger surface can also speed up the workflow. In that case you would only create an object that’s the outer shape of the balcony or wall and fill it with the material texture, scaling the texture to make it fit the way you want it to look. You might have to make a PNG or JPG file using an image editor in order to get the look you want.

Thanks. The explode idea did not work for me. The house still has many tears and other issues.

Thank you. I was hoping I would not have to build the project stick by stick. I am hoping to draw all the brick rowlock and board and batten details by editing the groups.

Unless the framing is something you need to show, you shouldn’t be modeling it. Modeling to the brick level probably doesn’t make a lot of sense, either. If you do, you should be using components instead of groups.

Thanks Dave,
Here’s how far I got with the new model.
FLW 1939 Rentz House Project 2.skp (8.9 MB)
I downloaded the SketchUp tutorials but I do not know how to play them. Do they play on SketchUp itself? I have watched the YouTube videos, and found them somewhat helpful. My main issue is the program likes to introduce errors which can snowball into huge tears in the model that I find maddeningly difficult to repair. I hoped setting the tolerance to 1/64" would help but I already found one in the fireplace of the new model.