Multiple surfaces on the same plane

I have used SketchUp for years and sometimes run into debilitating problems that are difficult to describe but generally start with multiple surfaces on the same plane. Those are easy to delete, but this sometimes seems to grow into multiple endpoints and lines existing in the same place, both of which are not discernible without turning the perspective off and zooming in far beyond measurable amounts. I have also noticed what should be a single line is broken by tiny jags that are off axis. At first I thought this problem was created by importing AutoCAD and drawing on top of them, but I am not sure.

The fixes I have resorted to include grouping and hiding surfaces, then deleting what’s left. Grouping surfaces and pushing and pulling to work out the unwanted lines, breaks and endpoints. Sometimes cutting out whole sections and redrawing or when I give up leaving unwanted lines and softening them in what should be a flat surface.

Any advice would be appreciated. Thanks

How about sharing a file here with an example?

Here is a portion of a model that I redrew because it was so messed up. To redraw this part of the model I first captured everything into a group and made sure it was a blank slate otherwise. I then used the push pull to recreate the walls over the group. Somehow in a couple areas I transferred the original issue to the newly drawn group and called it good enough.
The areas in yellow show where I gave up trying to fix.

Thanks for taking a look.

The main problem child is the non-planar face? 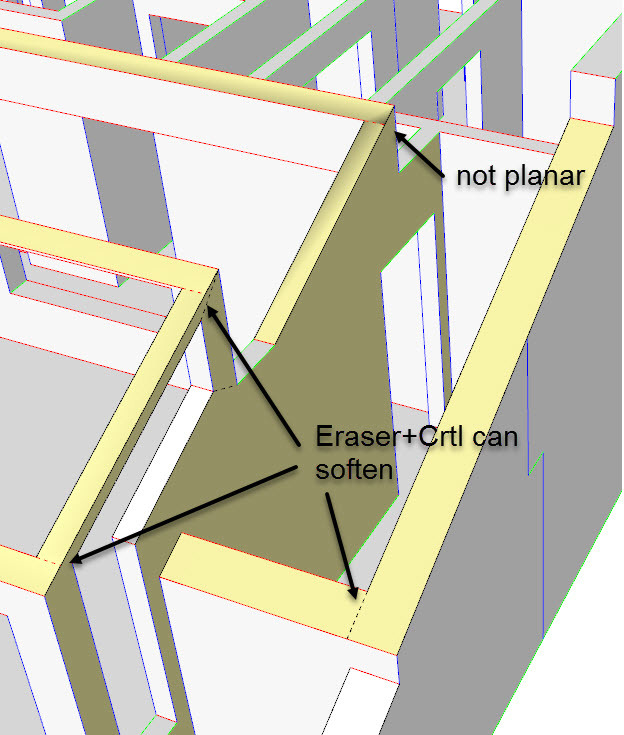 Some of the other “planar” faces can be fake by softening the edge with Eraser+Ctrl.

People have always encountered fun little issues with imported CAD data. Hopefully some of those folks will post here. But the first thing I thought of from your initial description was to extend the faces for that area marked as not planar in the image, make a Section plane and use TIG’s SectionCutFace plugin to make a planar surface you can intersect with the extruded wall geometry to make that problem surface planar.

Post a sample file sooner for more group brainstorming around here to help nip things in the bud sooner.

At first I thought this problem was created by importing AutoCAD and drawing on top of them, but I am not sure.

Inferring to imported CAD geometry is an invitation to propagating errors.
You’re better off importing a raster image of the CAD drawing to use as a reference in building the model in SU.

Thank You for the input