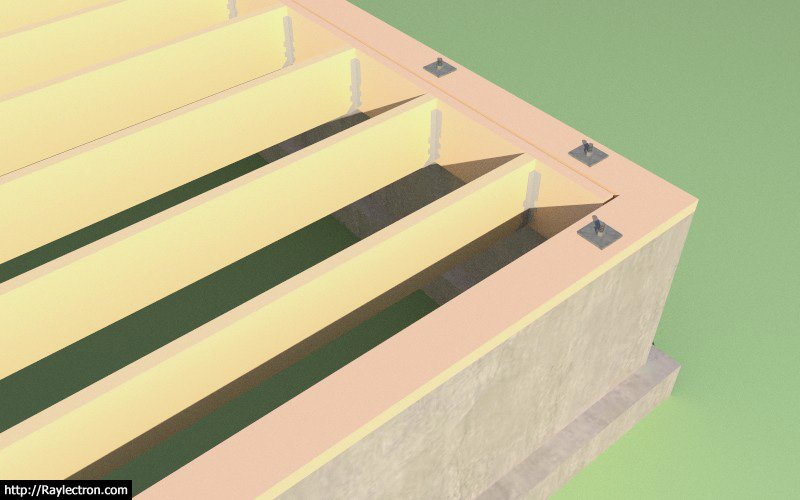 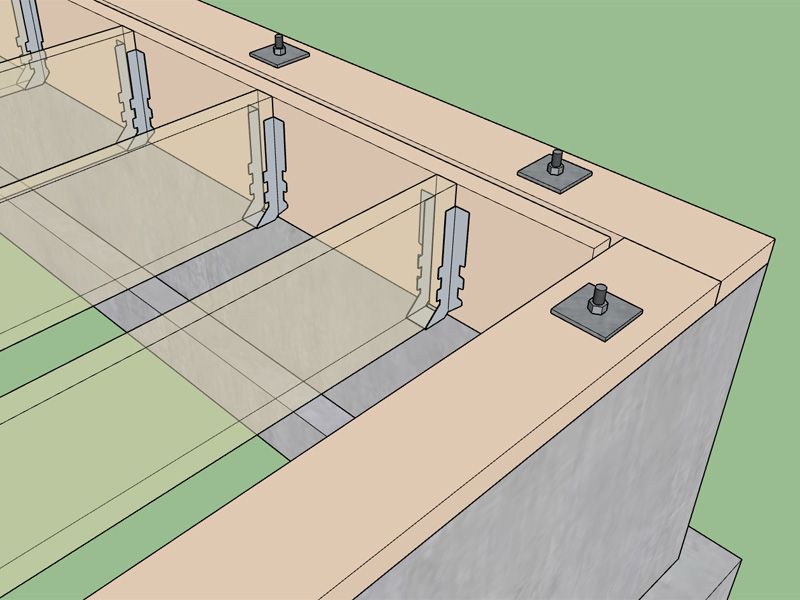 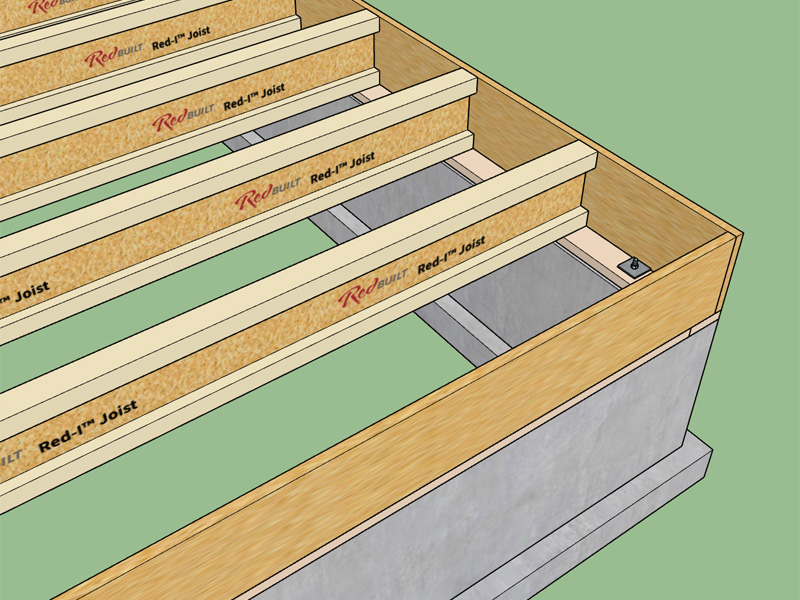 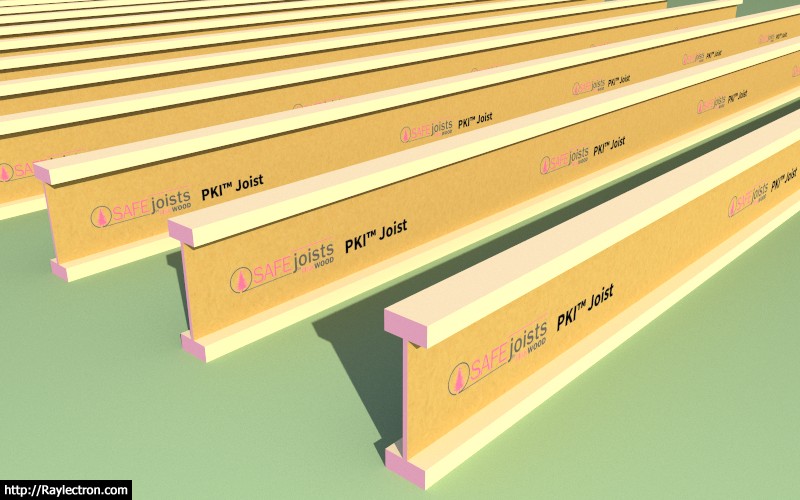 This I-joist manufacturer has a pink protective coating on the ends. The purpose of the end coating is to protect the joist against moisture penetration.

In addition, PinkWood offers Class A and Class B Fire Rated joists often referred to as “SAFEJoists”. These joists are protected with an intumescent Fire Rated Coating, and have tan colored coating on the web.

Now that I’ve got things configured correctly it is quite easy for me to add in new manufacturers and their entire series of I-joists. If you are interested in seeing a particular brand added to the plugin please feel free to contact me.

A request today for the barrel vault truss. I had been working on the algorithm for this truss type about 18 months ago but the lack of interest caused me to stop. Below is a matrix of potential configurations: 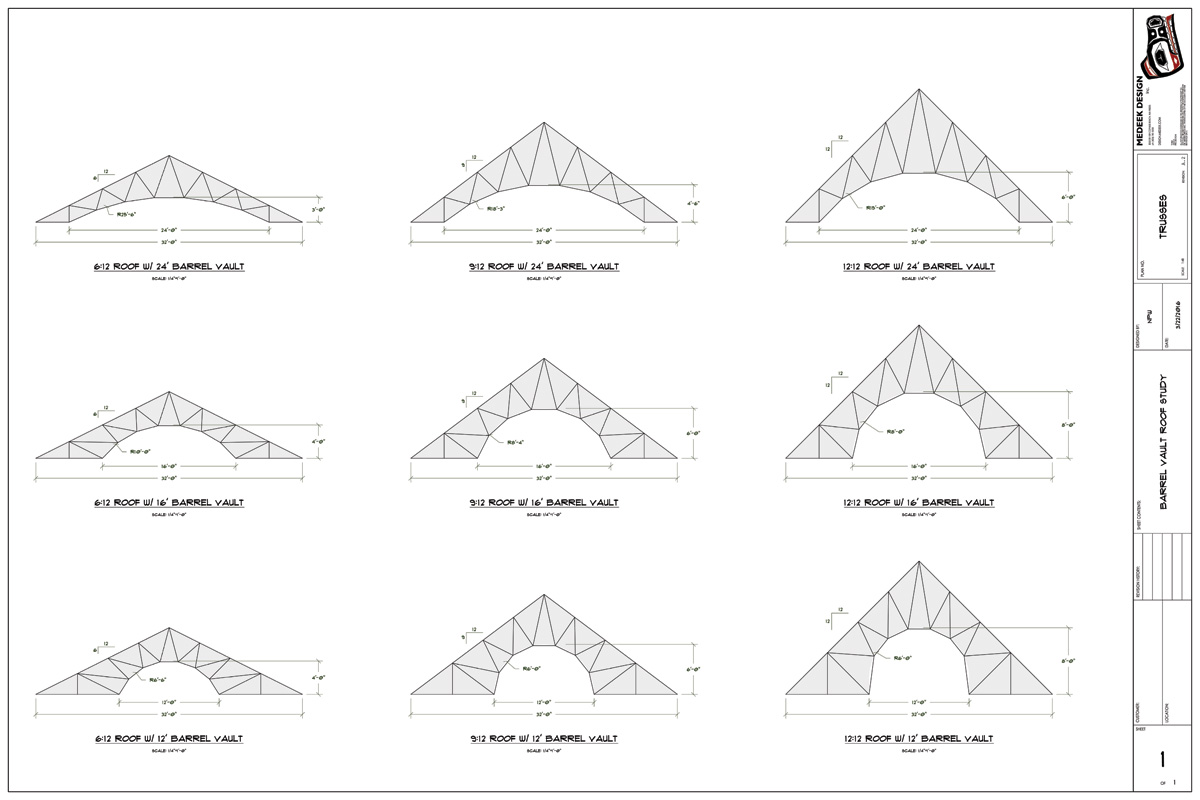 If anyone has some shop drawings for this truss type that they are willing to share I would be grateful.

I will try and knock this one out next week. I will probably utilize an html/svg UI since the look and feel of this truss type will be important to the designer (barrel height and barrel width).

I’ve got some direction on how to deal with engineering for beams and joists, not high on the priority list right now but I’ve been giving it some thought: 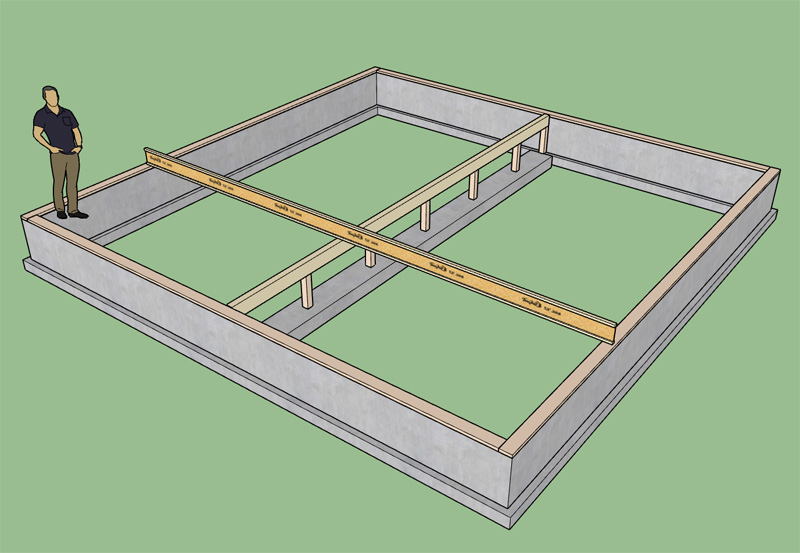 In the model below you can see that the I-joist is supported or touches three separate faces (surfaces). I am trying to figure out a way to code an algorithm that lets me know all of the bearing points along a beam or joist. Starting from one end...

At first gathering the geometric information from the model seemed the most challenging aspect of this problem but after giving it more thought, dealing with multi-span beams with various distributed and point loads is also not a trivial problem. My current beam calculator is very limited in this respect and can only handle very simple loading on a single span.

And yet even with the simplicity of the span and loading the logic and calculations required is fairly substantial. The output of the beam calculator will attest to this.

To properly analyze a multi-span beam with complex loading requires some magic from my engineering texts (ie. matrix analysis). Since beams and joists are one dimensional as compared with trusses (two dimensional) the math is not nearly as cumbersome but it should prove to be a bit of a challenge. 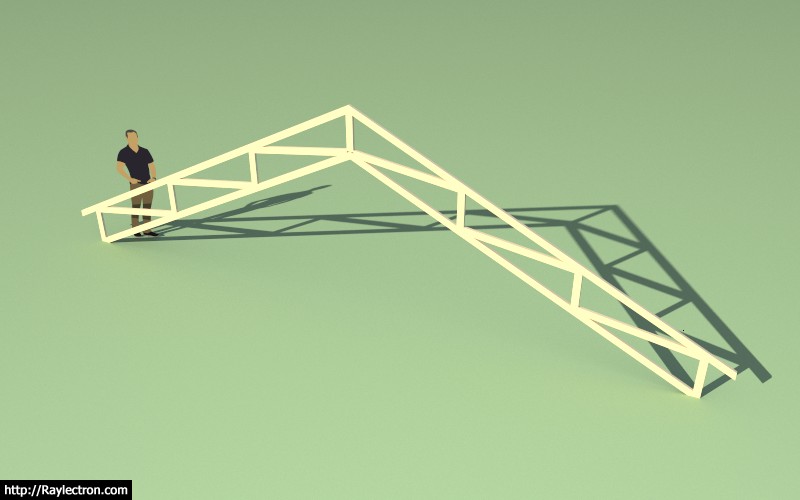 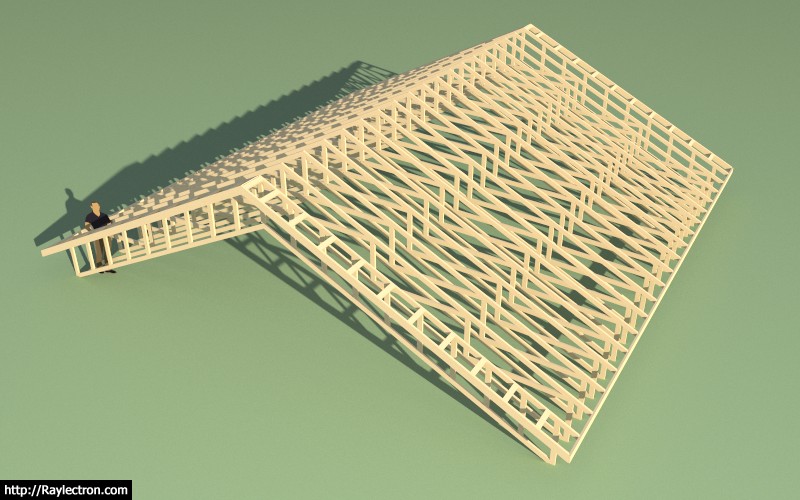 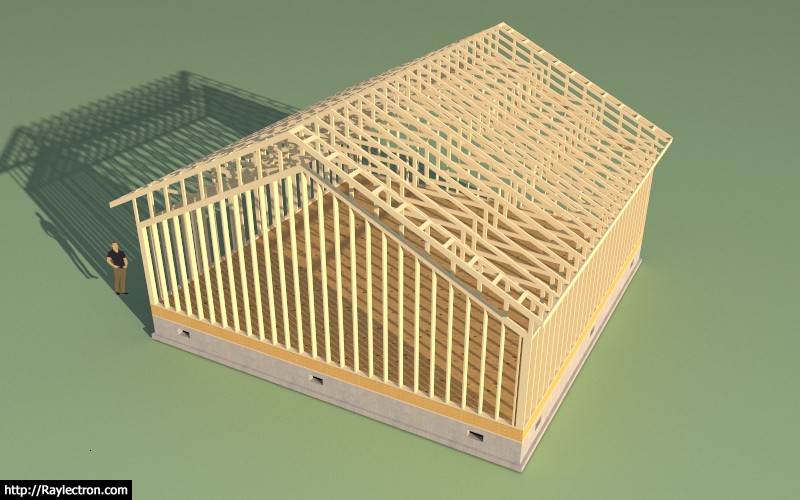 I will still need to enable structural outlookers and plates for this truss type, but everything else should be there: 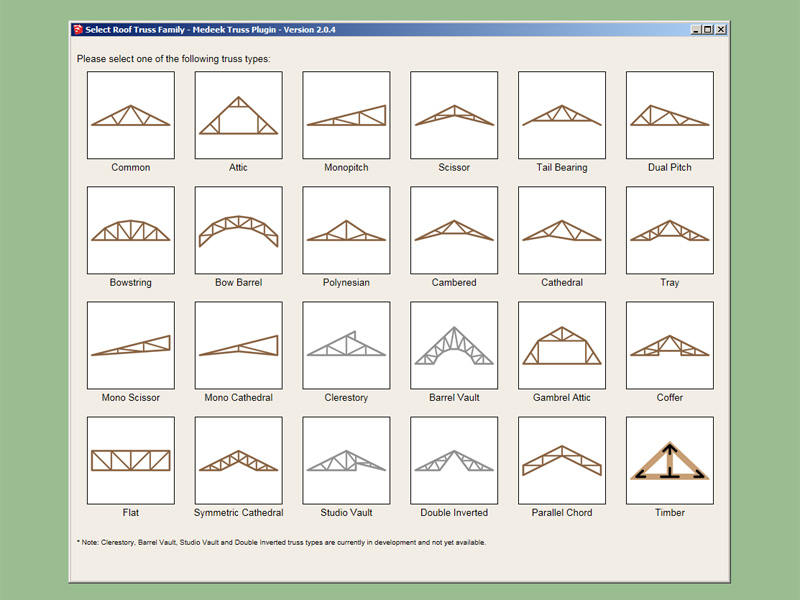 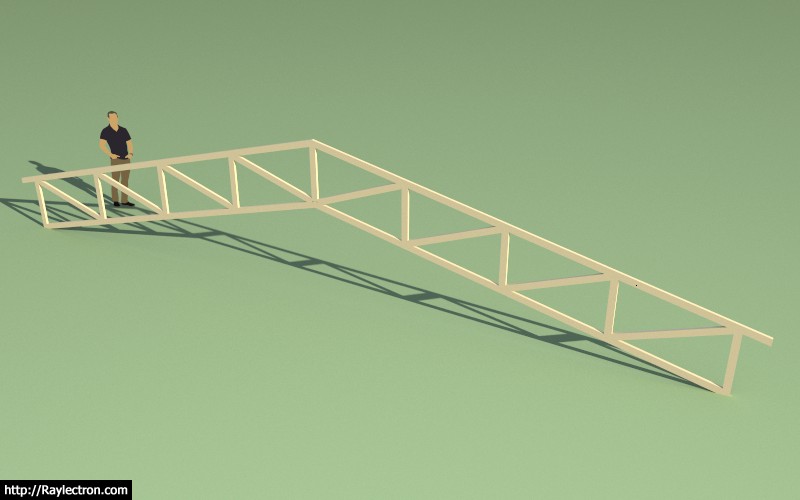 People have often asked why there is always a guy shown in various screen shots for the plugins next to the truss, foundation or building displayed. The reason for the person in the picture is to give the geometry some sense of scale. I’ve also received comments as to why the “old guy”? Some have even complained about it. Each release of SketchUp features a new default person for that release. The 2015 release featured an older gentleman. Since most of my audience is architects and designers who are the predominantly of the male gender perhaps it would be more fitting to use a female model to indicate the scale? 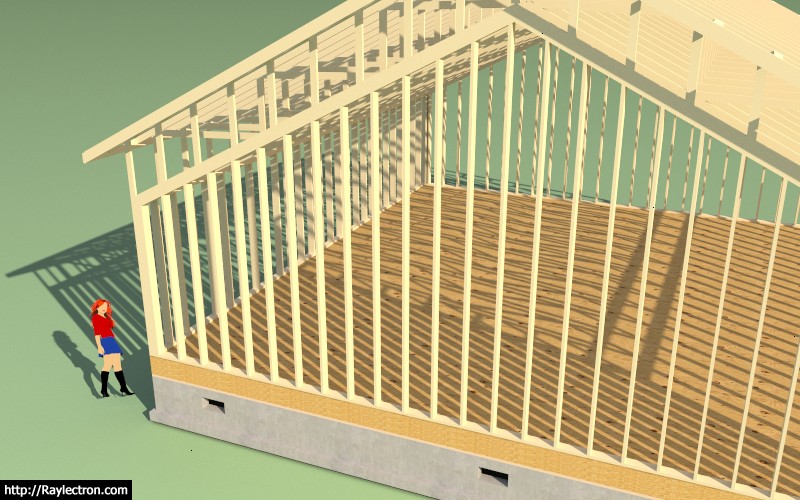 Conclusion: The problem with the female model is she is too distracting. The audience will naturally focus on the model and not on the product I am selling which is architectural modeling software (BIM). The model should only function as a yard stick and should remain secondary to the structure or building component displayed. Bottom line I won’t be switching to a female model anytime soon.

Another point worth noting is that a well designed truss or roof is already a thing of beauty, no further marketing gimmicks required.

I’ve been slowing chewing away at the straight skeleton algorithm and still working out some of the kinks, there is a lot of logic dealing with how the rafters intersect various valleys and ridges. I will continue to hammer away at this over the next couple of weeks and hopefully have something to release by the end of November or sooner.

On a slightly different note I’ve been examining Vali Architects Instant Roof plugin and looking at how it generates gutters. Is this something that people would be interested in seeing added to the plugin?

I don’t think it would be too much of a stretch to add this feature in.

I would probably start with the standard 5" K-style gutter where one could fine tune the dimensions within the global settings.

I’m assuming one would just want to draw this a surface and not a solid?

I don’t know if is something I will add in right away but it has been added to my list. I think that making the gutter a solid makes it easier to work with manually and that the top being covered or solid does not really affect the appearance detrimentally. 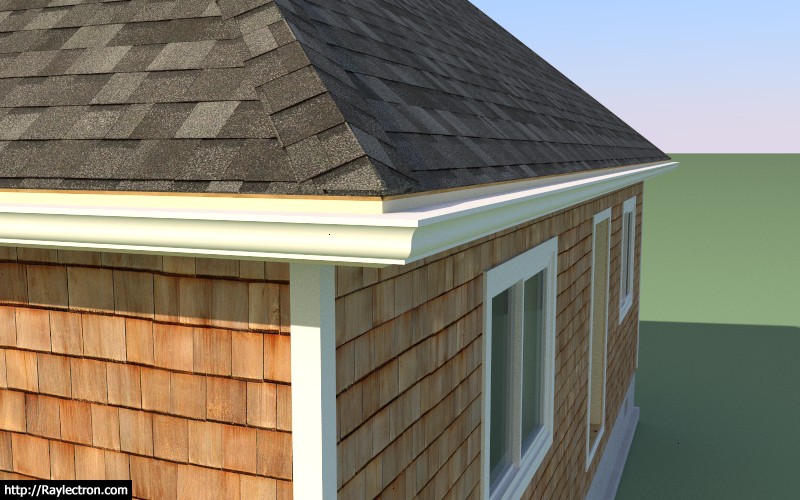 I’ve been contacted by a truss designer who uses Mitek software. He wanted to know if there was a way to bring my truss models directly into the Mitek Engineering software. Apparently there is a .mxf file format that is already utilized by a Revit plugin to do this exact thing. If I can get the specifications of the .mxf file format I can probably setup an export feature which will allow the full truss assembly to be exported directly into Mitek. This would be convenient for the truss technician, eliminating some of his workload and manual entry.

I’ve contacted Mitek’s support staff inquiring about the the .mxf file format and if they would entertain the idea of my plugin be able to transmit truss designs directly to their software.

About a year ago I added some code into the plugin to phone home when a new installation occurs. This tells me the IP address (geographic location) of the installation as well some other data such as the plugin version number and whether or not it is the trial or full version.

Recently I have noticed a number of installations of the full version of the plugin that show a bogus version number (2.8.8) and they are all coming from China. The leads me to believe that the plugin has been hacked and possibly those hacked copies are being distributed but so far not widely.

I guess the upside is that if the hackers are trying to crack the program it must be worth their time and hence I’ve put together a fairly substantial product.

On the next release I will include some additional error checking which will hopefully thwart these would be hackers.

I’ve also received comments as to why the “old guy”? Some have even complained about it. Each release of SketchUp features a new default person for that release. The 2015 release featured an older gentleman. Since most of my audience is architects and designers who are the predominantly of the male gender perhaps it would be more fitting to use a female model to indicate the scale?

Enlighten those grumpy architects and designers as to the identity of the older gentleman.

Thank-you. I always thought the older model was more distinguished myself.

SketchUp Essentials has put together a nice overview of the plugin. 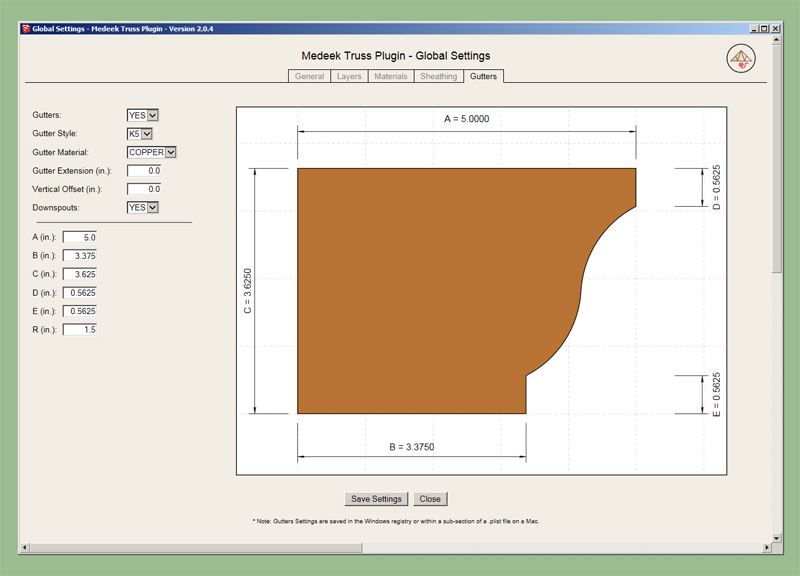 Why not make the ‘solid’ version have a transparent top face?

And in the UK, another common shape is almost semicircular, about 4" diameter, but not quite 180° - sorry, I don’t have exact dimensions. It clips into plastic brackets screwed to a vertical surface.

I’ll try and find a link to a builders’ merchant website with description and dimensions, if you want to follow this up.

You are probably talking about the half round gutter type: 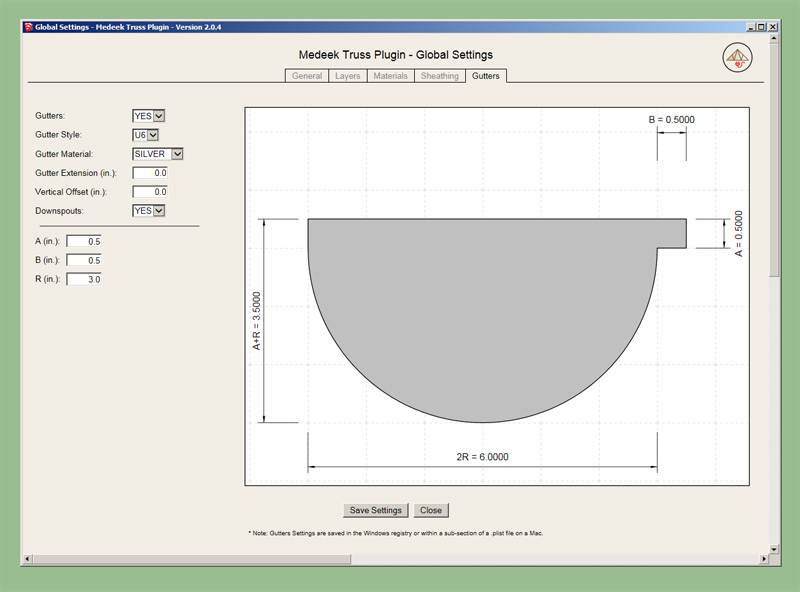