Just for entertainment. Making Sketchup do what it didn't oughta!

I create perspective illusions and other oddities. Over the many years I have been using Sketchup I have learned how use it (or rather misuse it) as the basis for creating impossible objects that can’t actually exist in true 3D space. I have posted a couple of these in the past.

I thought this one of a Quad bike riding the infamous “Quadbender” might amuse some of you. It was created in Sketchup and finished in Photoshop. Many of you will realise that the use of isometric parallel projection, enabling me to make points that are not coplanar appear to be so, is key to this figure.

If you take a cross section of the Quadbender at any point it will be square with four sides. At first sight this might seem to imply that the figure is four sided but this is not so. In point of fact the shape is in essence the well known Penrose impossible triangle but with rounded corners. It is topologically equivalent to a triple twist Möbius strip. The the path around this object a single surface. The rider will return to his starting point having traversed all four ‘sides’ of the Quadbender.

The second image (surprisingly difficult for all its apparent simplicity) was also created in Sketchup with Photoshop post production. It shows just how this path works. (Thanks to Storyboarder for the SK Warehouse quad biker used in the second image.)

My apologies for unnecessary frivolity in these otherwise serious and incredibly useful forums. 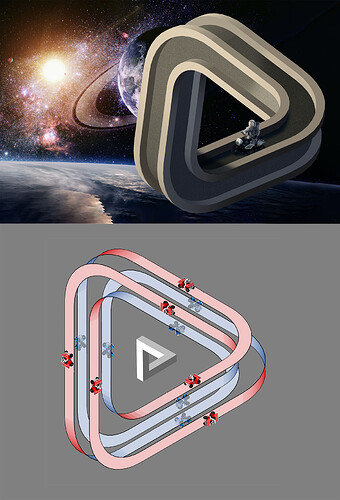 Thought you were going to reference M C Escher…

He did at least one Möbius based engraving that I can recall. Perhaps more I’ve forgotten.