A Sketchup conundrum ...... Purely for amusement

The attached image is of the well known Tri-Bar or Penrose triangle as it is sometimes known - after its creator Roger Penrose. (Although it was later discovered that the Swedish artist Oscar Reutersvärd had created the same figure twenty years earlier).

This particular version was used, as the basis for an Image created in Photoshop where it was given a wooden texture and composited into a background.

What is of interest (maybe 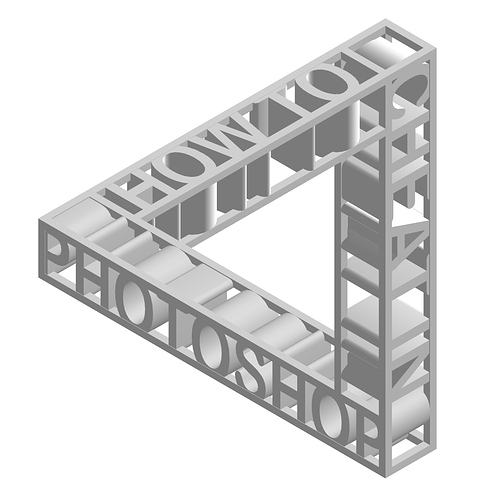 What you see here a 2D export direct from Sketchup itself.

It is clearly an impossible figure that cannot exist in true 3D space.

But Sketchup can only create figures that do exist in true 3D space.

So how did I manage to get Sketchup to produce this?

I will provide the answer in a few days ……….

My guess has been submitted by PM …

An oldie but a goodie.

Let me add that it is not a 2D picture from elsewhere simply applied to a flat surface facing camera in Sketchup. It is a true 3D model created in Sketchup itself.

Kewl! I got it! But others may also want to guess, so I won’t put it here yet. Please feel free to copy my PM to an update here once you feel enough time has passed for others to guess.

Sure. I’ll wait and see if it generates any interest first and then post other answers together with the explanation. 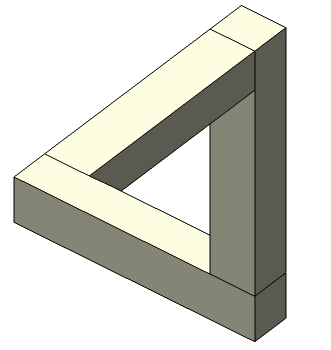 I would like to see these examples in perspective view mode, rather than in parallel view and still “working”. That would be a challenge.
I know it would be from a one spot camera position, not along a specific line.

That would indeed be a challenge …

OK. Well the cat seems truly out of the bag now. Everyone who took a guess, or better, including those who messaged me privately, got it right. Some completely grasped it and some grasped the principal without necessarily the specifics.

The illusion relies entirely on parallel projection which suppresses size changing as a function of distance. This allows distant objects and close objects to be the same size and appear coplanar even when that is far from the case. Combined with an exact viewpoint which aligns the background and foreground so they touch the mind creates a connection where none exists. The attached animation should make it completely clear.

Hope you enjoyed this little diversion …

I have, in fact, used Sketchup to construct base geometry (mostly parallel isometric) for a number of illusions now.

All of the construction - pathways, metalwork, columns, etc. in the example below started life as a Sketchup model using exactly the same principal of a unique parallel projection viewpoint that creates the illusion of connections where none actually exist. This was exported in a number of 2D images of different elements of the construction by turning on and off layer visibility.

These were re-combined on Photoshop and rendering and lighting applied by hand. Finally the people were posed, lit and photographed from the correct viewpoint to drop into their planned positions.

Not perhaps the intended purpose of Sketchup but it does the job perfectly!! 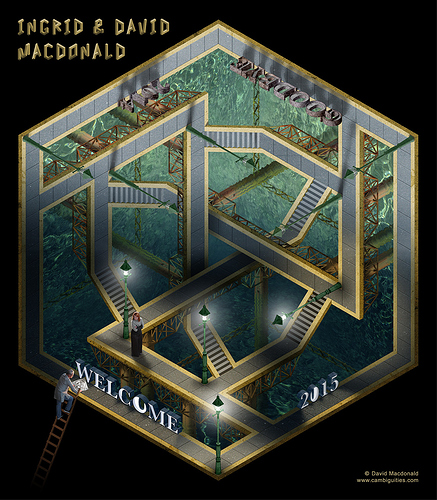 Glad you like it! Fun to do as well.