What a magnificent eight-hundred-year-old piece of art.

Does anyone know the extents of the damage? I watched a live stream yesterday but the journalists didn’t seem very well trained in the art of architecture. They spoke about the “main spire” (a 19th century addition) as well as “the whole frame” being ablaze (the roof trusses and roof structure).

Does anyone know the condition of the masonry, the interior or the rose windows?

Hello, I work & live a few meters away from it, All the roof and the spire were destroyed. I watched it burn painfully and could feel the heat from across the river.

One vault was destroyed in the inside, probably when the spire fell down, but appart from that there’s not much damage on the masonry.

Everyone is congratulating the firemen here, but I believe there was a huge lack of means and organization.

Loss is something that has always followed human history (the images remind a lot of the heritage and cathedrals that burned in many countries 75 years ago). Also, creative people like modelers and material artists have experienced loss with various works.

But the extent of this devastation, of this iconic and symbolic building, is disrupting us in an era where we thought we were finally safe from it. At least and thanks to the rescuers no persons were affected.

I feel your pain. The same happened some years ago in my home town at a smaller scale when a silly young arsonist set fire to the roof of our late medieval church. The roof went to ashes but happily the interior suffered little damage. Here’s two images, one of the church with its gutted roof and another showing the importance of the restored building in its small town context. The church would probably fit inside the nave of Notre Dame, roof and all-

Looking at the videos it seems to me that there was a real danger of the Notre Dame fire spreading to the whole island.

You would think with an edifice of this importance they would have already installed a sprinkler system and seismic upgrades as necessary.

I always assumed that there was not much to burn in these great stone and mason structures but I guess the roof system was all built of Oak timbers underneath a “lead” roof.

Yes, an enormous attic of wood frame roof above the stone vaults. In grad school, I got a special tour of Chartres, which got us into the attic, and I was blown away by the size of it.

they would have already installed a sprinkler system

Sprinklers are often not wanted in the most important historical buildings. The damage they cause when going off accidentally is often as big as what a fire causes, especially for wooden structures and works of art. Instead, what is wanted is the best available fire alarm system, and precautions like compartments to prevent an eventual fire from spreading.
What the Notre Dame seems to have lacked is installations that would have helped the firefighters to do their job at the top of the building, for instance preinstalled tubing for pumping water up. I understand that basically they could only let it burn and try to limit the fire from spreading.

I am somewhat surprised, given that what happened at Windsor Castle in 1992, that those responsible did not learn the lesson.

Sprinklers are often not wanted in the most important historical buildings. The damage they cause when going off accidentally is often as big as what a fire causes, especially for wooden structures and works of art.

When seeing the fire on the news my mum reacted that there were no visible fire fighting. My first reaction was that the water may do even more damage and a decision might have been made to let the roof burn up. It’s not unheard of to sacrifice an attic to avoid flooding apartments below. Generally fire spreads upwards but not very much downwards.

my mum reacted that there were no visible fire fighting

When the flames were high it would have been too hazardous to go too near. I read in our news that the Paris fire brigade wasn’t really equipped to put out such a large fire at such a height. Like all big buildings, the cathedral is much bigger than it looks. They said that the top of the central spire that collapsed was about 100 meters high, something like 30 stories. I don’t think there is much mobile equipment that can access even half of that. In our parts, buildings more than 8 stories have to make special provisions for people to be able to exit in case of fire without outside help.

Big buildings, especially cathedrals are continuously being renovated. When they finish at one end it’s time to start at the other end.

The challenge is to detect fires early, because the stack effect allows a fire to spread within minutes over hundreds of meters. The same happened when my home town’s most iconic sight was put on fire for the second time within 15 years. Buildings can be rebuilt, but being mostly of wood, there is not much authentic anymore.

The cobble-stone alleys around Notre Dame are narrow (with parking cars and attached housings).
Industrial companies’ fire brigades use airplane jet engines (turbo extinguishers) that blow a rain cloud against the fire. Thinking about it, probably every big city should possess one, too, but then it is also a question of getting it into the right place timely.

Why is there only one pump truck working the fire? 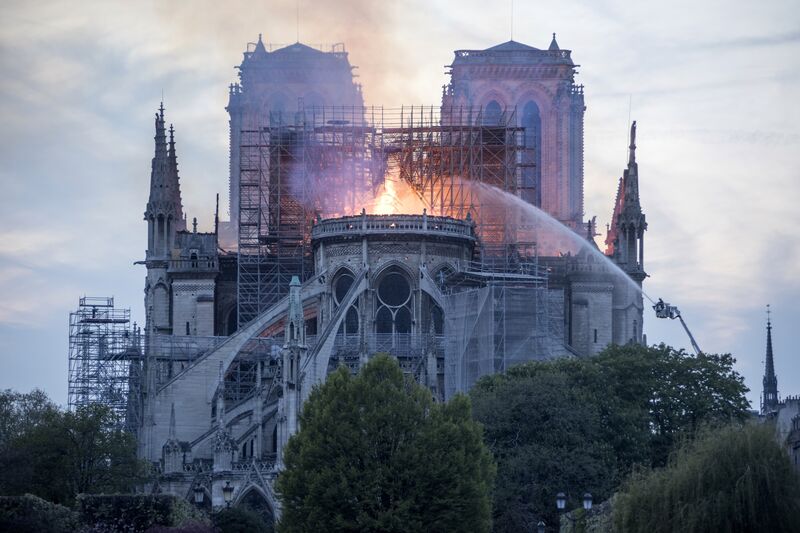 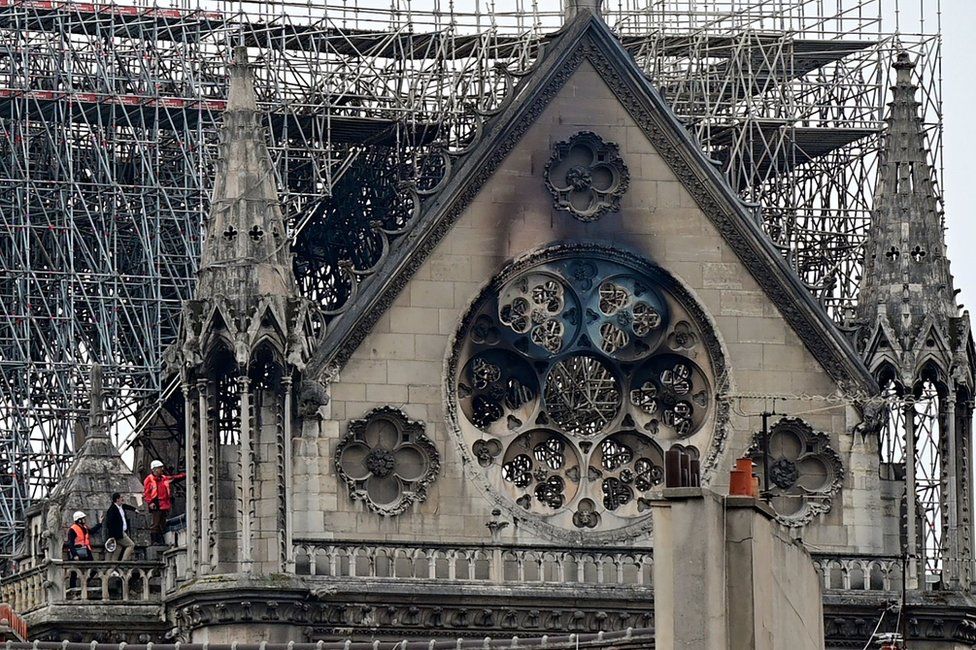 Amazing, the scaffolding didn’t collapse with all the heat.

The New York Times in the US and The Guardian in the UK have both done extensive coverage of the fire and its aftermath. You can access both papers online.
From what I can recall from what I’ve read, the fire destroyed two-thirds of the roof. One firefighter was quoted as saying that they let the roof burn (because that old dry oak burned too quickly) and concentrated on preventing the fire from reaching the bell towers. The rose windows apparently survived. However, engineers are still assessing the structural soundness of the masonry. One article said that some of the flying buttresses may have been weakened. Before the fire, a major restoration was underway because the stonework had suffered mightily from years of pollution and neglect. One reporter said that if you brushed your hand against the stone, it would crumble like a sand castle.
Fortunately, two very rich Frenchmen have already pledged $330 million toward the reconstruction, which will probably cost more than $1-billion. President Macron wants the cathedrel restored in five years’ time. But I can’t imagine that there are enough stonecutters available to tackle the job. I hope I’m wrong.

This is depressing news. The Notre-Dame is one of the world’s finest architectural icons. I read it’s supposed to cost 1-2 billion euros to repair. That’s so expensive. What a tragedy.

it seems history was doomed to repeat itself here and correct me if I’m wrong but this is the 2nd/3rd time this has happened right? maybe not to this extent but surely that serves as a stronger point “learn from the past”.

as hard as I suspect it will be I would very much like the reconstruction to stick to 100% of the original and in fact hope they do, instead of a rush job.

Hello, This is actually the first time it happens. The spire had been removed during french revolution and Viollet-Le-duc designed a new one in the mid 19th century.

I’m not sure it will stick to the “original”, which wasn’t itself sticking to the original… and I just heard they were about to launch an international architecture competition…

To avoid a similar catastrophe I would recommend framing the roof with steel.

With the heat of the fire I would be surprised if the masonry that was in direct contact with the blaze is structurally sound, it will probably be fractured and in some cases completely friable. My guess is that a good portion of the upper masonry (where the roof meets the walls) will need to be replaced.