I swear this model is a solid but Shapeways says no

I used both Solid Inspector in Sketchup and then checked it with Meshmixer to make sure this model is solid. I’ve used Shapeways before but on this model I’m getting an error for not being manifold. Is there another way to check what part of the model is the problem? I successfully uploaded an almost exact version of the model before except I made changes to one of the two bolt looking parts. The only other issue is these models are small but I created them while blown up 1000 times. There are many small faces and edges. Could they show perfectly solid in Sketchup and Meshmixer but not solid in Shapeways cloud?

I’ve attached the model. First one is STL and second is probably the easiest to check as Sketchup component.

You could try this one, it may be different. I used a fix it plugin and it fixed some edges and merged some faces.
sprue tree with shackles and heartsBOX.skp (2.6 MB)

Thank you. I will try it asap. I continually checked for solid while making it for so long so I was very surprised when I got an error.

I’m not sure if it has anything to do with the proximate issue, Rick, but your model is extremely far from the origin–over 1200 times its own greatest dimension. It was seriously freaking out my copy of SU: really bad clipping and squirrelly, unpredictable behavior. I moved it to the origin and it more or less settled down.

I think the seed of all problems is that you are modeling in real size (mm).You should do it in 1000x scale in m units.Susolid plugin show some problems in unicorn,this is why I have isolated it and corrected.Try the attached model and let me know if Shapeways like it.Now the model is in meters unit so you have to export it in meters units to stl.
Good luck.
Davidsprue tree with shackles and hearts_solid.skp (2.6 MB)

Thank you David but model was 1000 times bigger when I created it. I only scaled it down to mm when it was time to 3d print. In other words, when I make the model in Sketchup, I multiply all my dimensions by 1000. So my models says 20,000 mm but when I’m done, I multiply by .001 so it’s 20mm. That’s probably why my model seems to be a solid at first.

Thanks for the tip. I have the “center on Origin” plugin and use it often but failed to do it this time. No wonder I also had clipping issues.

You know, Rick, if you use the method of working with small objects that I showed you, there won’t be a problem with getting the model located near the origin and you won’t have to use that plugin.

Oh, so that’s why you make a copy of it and work on the blown up copy, because the original stays at the origin. I was trying to figure out what the benefit of you working on a copy of it was. Thanks.

Exactly! Or at least the original is where you started it.

Rick, your original model is solid by Sketchup definition,but has some distorted faces i the unicorn part of the model.That can cause problems to some other software with lower tolerance than Sketchup has.And please don’t forget to report if the model is suitable for Shapeways.

Ah, I see, David. So you are saying, that when I create my models. I can leave them as meters in Sketchup. And then when I import the .stl into Shapeways, I pick the choice of mm and it will automatically scale it for me? I didn’t know it works like that.

OK, it looks like you guys were all correct about the unicorn part being bad. And now I know how to check for the problem myself. Long story short, since I don’t have 2016 Sketchup yet, I could not try the files that you guys repaired for me. So you probably fixed it though because when I deleted the unicorn face and made a new flat face, the model works perfectly now.

What I discovered on how to check for myself for the problem is this… Even though Sketchup showed that face with the unicorn being perfectly fine and flat… Even with hidden Geometry turned on… If I open the exported .STL model with Meshmixer or Netfabb… I could see distortion on that face with the unicorn. So you guys were correct, that Sketchup has different level of sensitivity to face distortion.

Thanks guys, you helped me immensely. I feel dumb not knowing that I could literally see the problem and distortion if I simply open the STL in Meshmixer, etc. Even in Sketchup, you can see it if you import it as an STL. So Sketchup simply does not show any of the distortion at all until it’s an STL file.

But… I don’t think keeping the model in meters would have show the distortion in Sketchup, because I had it at 1000 times bigger and I didn’t see any distortion.

So you are saying, that when I create my models. I can leave them as meters in Sketchup. And then when I import the .stl into Shapeways, I pick the choice of mm and it will automatically scale it for me? I didn’t know it works like that.

Exactly, because stl file doesn’t have a unit information,there are just numbers.

I feel dumb not knowing that I could literally see the problem and distortion if I simply open the STL in Meshmixer, etc. Even in Sketchup, you can see it if you import it as an STL. So Sketchup simply does not show any of the distortion at all until it’s an STL file.

Or simply check the model with Susolid pugin where you can see the distorted faces on counter and marked on the model and then fix them with brown button.See attached picture. 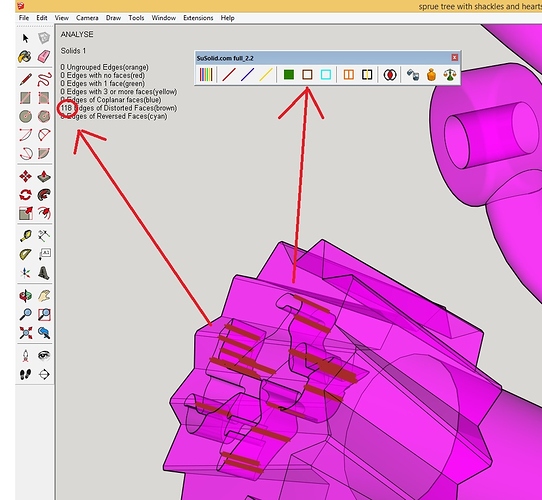 Thanks guys, you helped me immensely. I feel dumb not knowing that I could literally see the problem and distortion if I simply open the STL in Meshmixer, etc. Even in Sketchup, you can see it if you import it as an STL. So Sketchup simply does not show any of the distortion at all until it’s an STL file.

Rick know you posted as issue solved but some more infor that may help you:
I used your stl moel as is: Netfab( shapeway free version) free reports as solid but I think it is bogus report the stamp looks very questionable on the face of gears,; Meshmixer reports some strength issues; If you are thinking about printing then there are over hang issues or, you have to use printer that mitigates that ( Like SLS which menas or $$) or, plan on some support post. Meshmixer can show the add in The problem of the scale up approach is it can give fasle reports also since thickness is also scaled so passing one is not total closed form solution. Su is ok on scale up but I think of it as necessary step but not sufficient you can print; Use meshmixer latest version it has been upgraded.
Just some thoughts:smiling_imp:

mac, not sure if you’re aware, but anytime someone is using Shapeways, they don’t need to worry about overhang issues. All of Shapeways printers use some form of support material.

Thank you David, so much for telling me about this plugin. That is very interesting and could serve me well.

Thanks again everyone. I think I have enough information to clean up my models better now.

When your group or component has exactly two faces for every edge and there is no other content, then Entity Info should report it as ‘Solid’…

However, a seemingly ‘manifold solid’ can still be unprintable in the real word.

The two main reasons are:

Thank you for the very good technical explanation. Appreciate it. It is very helpful. The main source of my problem, is that I did not know before that faces/edges that can look perfectly flat in Sketchup can show distortion when you export them to stl. Even with hidden geometry turned on, I didn’t see any issues at all with the face/edges that look very messed up when exported to stl.

FYI again: The basic stl format is numeric but, Check the SU plugin and you will find they have included a dimensional conversion internal to the plugin or that is how I read it?