How do you unlink components

I have a component that I duplicated by copying and pasting.
I was not aware that the copied component is still linked to the original.
How do I unlink or ungroup a component?

Upload the SKP file so we can see what you’ve got.

Complete Sketchup newbie here. How/Where do I upload a file? I know how to create files and copies though.

7th button from the left in the row above the message window.

OK. Thanks for your prompt help, BTW.

OK. Got the file. What are you trying to make unique?

The part in question is the lone panel. It was copied from the group at the end of the “box” construction. I am using it as a style template to create drawer fronts of matching design/construction.

Your model is not constructed correctly. You can make the entire frame and panel assembly unique because it is an instance of a component. Just right click on it and choose Make Unique. But since you are using groups for the parts of the assembly, Make Unique is not an option and wouldn’t make sense if it was there.

OK. That worked. I do not get the gist of “not constructed properly”, however, I am supposed to get formal classroom training in this fairly soon. Hope it covers some of this. Thank you.

Hope it covers some of this.

For a model like yours, using groups for the base level parts is inefficient. It wakes your work more difficult and time consuming. Use components instead. I’m reworking your model to make it correct. I’ll upload it shortly.

You’re also leaving some elements such as the panels in the frames as loose geometry. This is also problematic.

So you would keep individual “parts” as components. My guess is that I can then, in a drawing, quickly modify a single component and replicate to construct? Leaving me with a modifiable library of components?

Yes I would and yes, among other benefits.

I can already see that generating a cut list will work as opposed to completely failing.

Yes. A cutlist makes a whole lot more sense when the parts don’t all have the exact same name, too.

Here’s my version of your model. Other than using only components, the only change I made was to make the end frame stile extend to the top and bottom of the frame so there’s no exposed end grain. 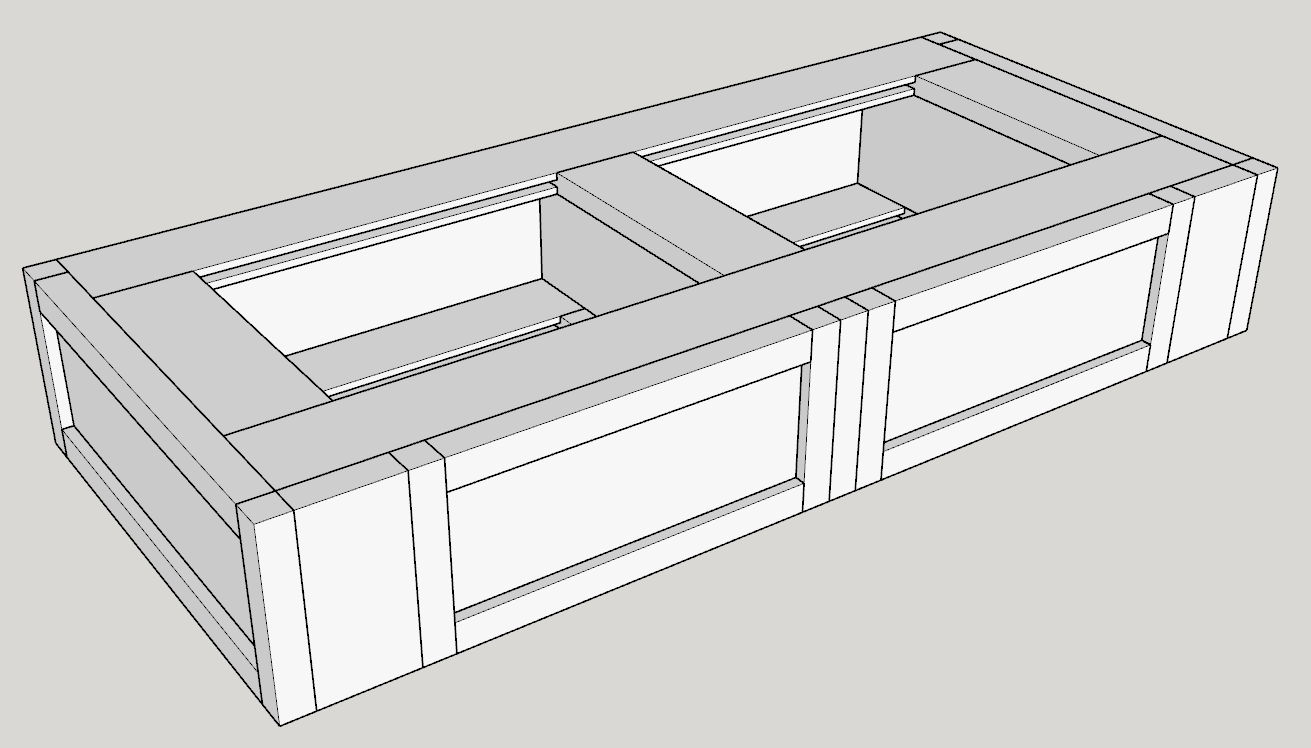 This thing is built like a brick outhouse.What are you putting on top of it? A Buick? I would change those panels inside the ends to nothing more than 3/4 in. square strips to guide the drawers. 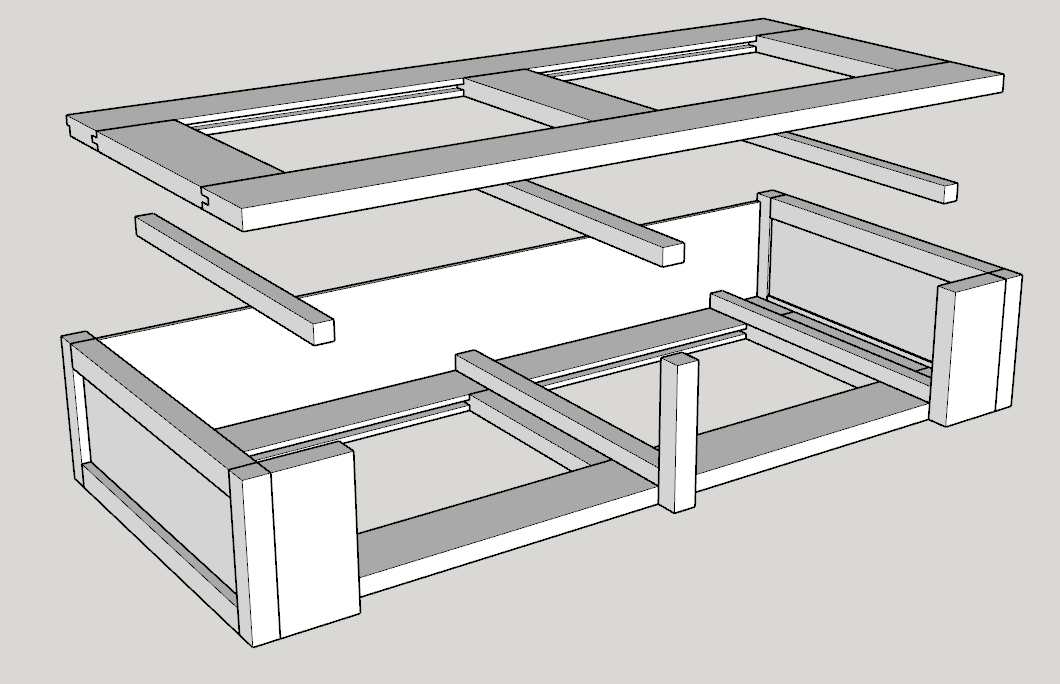 This is suspended from a 1.5" thick table top, nested between four legs that are dove-tailed into the top. So the end-grain was not going to be visible anyway, but obviously you know your wood-craft. The “heavy” construction is to match an existing piece not built by me.

One aspect, since this is a required" project for a wood-tech class (WT10/11, Laney College, Oakland CA.), is that certain materials and construction joinery and techniques must be employed within the project as a whole. I am making my own veneer panels, so thickness and sizing of components also is based on what will produce best results within the confines of many other parameters, and what tools are available to me in general. This box is simply the “cabinet” portion of the project that will have two drawers. The project is a writing table/desk for my wife.
Drawing3.pdf (38.6 KB)

Again, Thank you for your help.

I think you might still want to lighten up your drawer case. 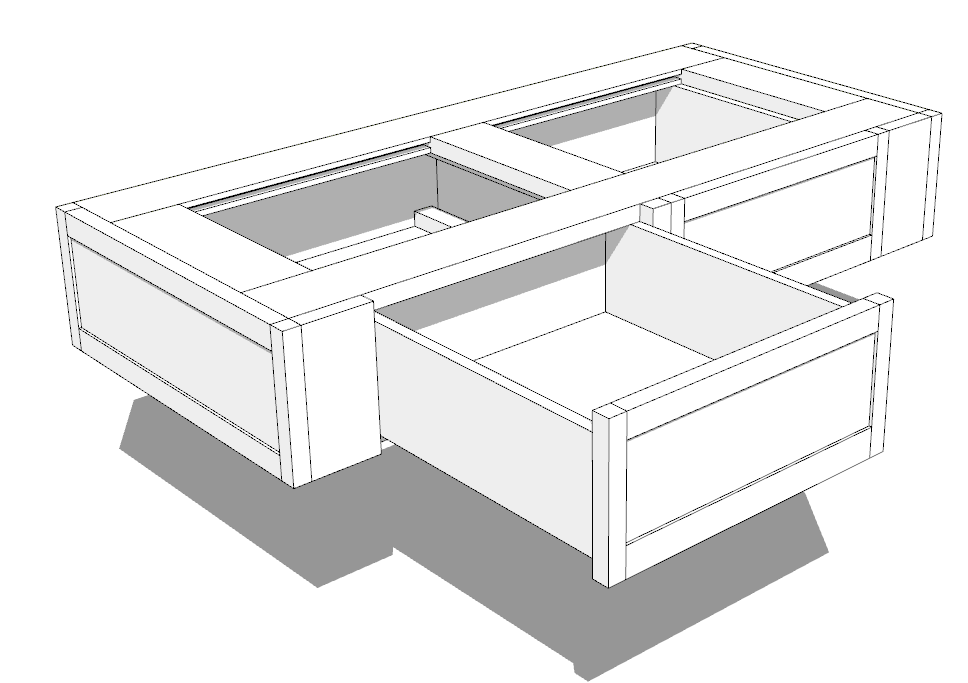 Most of the case parts won’t show under the table so they really don’t need to be so thick and heavy.