I modeled this piece in Sketchup. At one point, I had View Hidden Geometry on, but turned it off to save and exported to Layout. I then adjusted my views to vector and exported as a PDF. Hidden geometry shows up as dashed lines (not as shading) in the PDF, but not in the Layout or Sketchup.

Anyone know what’s up here, or if there’s a workaround? A similar piece I created at another time exported just fine.

I don’t see any hidden geometry in your PDF. I see some light lines between the faces on the curved surfaces which comes from the way shading is done in Vector rendering. Rending in Hybrid should get rid of that. 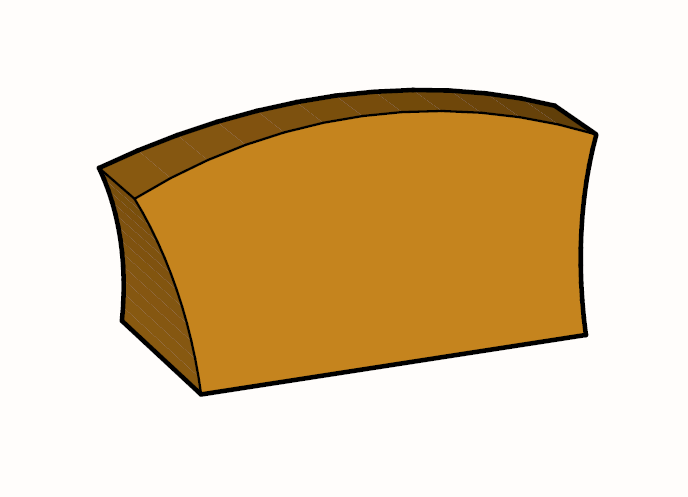 I wonder why that is— I always use vector rendering, never hybrid, and have not seen this before. A similar piece, constructed a year or two ago, did not render this way in the same file when I just exported to it PDF. And now, when I copy and paste that part in the file I uploaded, it shows the same effect.

I don’t know why you are only just seeing this. It’s been a “thing” for as long as I’ve used LayOut (since before the first version was released).

Vector rendering of materials on curved surfaces doesn’t show the same smooth rendering that you get in with Hybrid rendering which uses Raster rendering for materials. Here’s a quickie example comparing Raster, Vector, and Hybrid from left to right.

As a technical note, Vector output doesn’t support gradients so every face in the model gets an uniform shade. Your curved surfaces may have previously had more facets so the effect hasn’t shown as prominently as in your current model. Gradients are a raster effect.