can anybody recommend me an extension to recording animations of a moving object? The moving object is moved by MS Physics.

I hope that you can find the answer here. 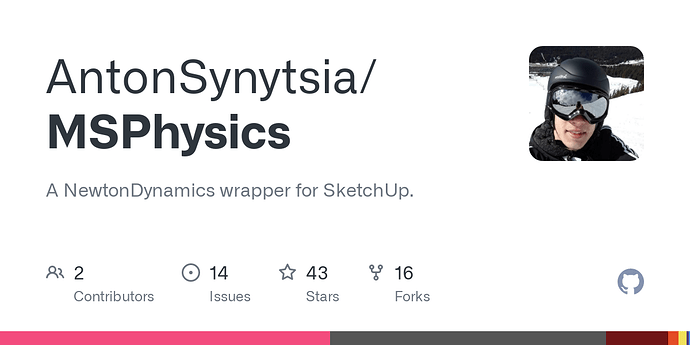 A NewtonDynamics wrapper for SketchUp. Contribute to AntonSynytsia/MSPhysics development by creating an account on GitHub.

The MSPhysics extension is capable of generating the frames comprising an animation. Look at the (scanty) documentation referenced above. You will need to use another tool to combine all the separate image frames into a video file (.MP4 etc.), if I recall correctly.

thank you. I managed it.

thank you i managed it.

which tool do i need for exporting it into a videofile?

how can I divide the recorded animation into further image files? I only get one or two images???Please can you explain me how to adjust the settings to get more image files?

I have used FFmpeg for doing this chore. There is a Mac (which I use) and Windows version available. 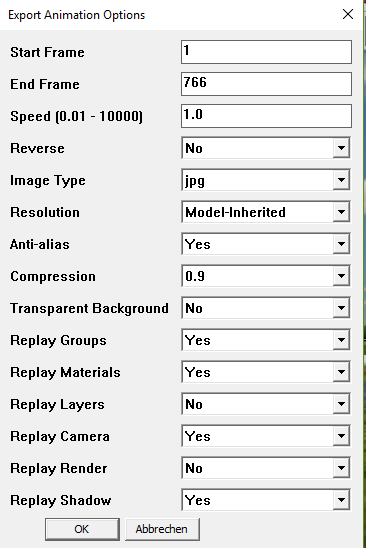 When I try to export the recorded animation into image files, these settings appear to my screen. Do I have to change something here to get more image files?

how can I divide the recorded animation into further image files? I only get one or two images???Please can you explain me how to adjust the settings to get more image files?

I’m not at my workstation currently, but from memory you need to click a button in one of the MSPhysics toolbars to tell it to record (that is, remember in memory) future simulation runs. Then run a simulation. When you click the Reset button while recording was active, MSPhysics should display a dialog box asking if you want to save the recording. I think you say yes (and maybe indicate the directory/folder in which to save the image files). Then a second dialog should appear with lots of fields letting you set the attributes of the sequence of images - display resolution, time scale, compression, lots of stuff. Click OK or Done (or whatever is the button) in that dialog, and MSPhysics will then create all the image files. This can take a long time depending on how many frames and the scene complexity etc.

Yes, that’s the second dialog box I mentioned in my prior reply. The first two fields indicate that 776 frames should be created (frames #1 through #776). You should not need to change anything. Just clicking OK should cause MSPhysics to begin creating the frames. If only one or two frames are created, I don’t know what error condition might be occurring. Note that creating the frames can take a while (for me it was a few seconds per frame).

I have found my mistake…I pressed the “OK” button too early and aborted the recorded image files.Thank you man.